The men's 4x400m relay quartet of Kunhu Muhammed, Muhammed Anas, Ayyasamy Dharun and Arokia Rajiv (running as India A) smashed the national record by finishing the race with a timing of 3:00.91secs at Sree Kanteerava Stadium. 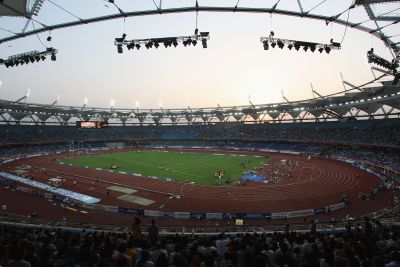 The quartet clipped more than one second from their four-week old earlier national record of 3:02.17secs which they clocked at Erzurum, Turkey.

The men's 4x400m relay team on Sunday leaped five points to 13th spot in the current world rankings after this effort.

The top 16 countries in the world at the deadline of July 11 will qualify for Rio Olympics.

The women's 4x400m relay team, which on Saturday slipped to 14th spot due to the ongoing European championships in Amsterdam, bounced back to its original 12th place after this performance on Sunday.

Athletics Federation of India Secretary C K Valson said that both the men's and women's 4x400m relay teams are certain to qualify for Rio Olympics.

With the addition of the men's and women's 4x400m relay teams, the Indian track and field contingent is likely to swell to 33 as 24 have already qualified for the Rio Games.

Muhammad Anas (men's 400m) and Nirmala Sheoran (women's 400m) and Tintu Luka (women's 800m) have already qualified for the Olympics in their individual events and since they are expected to be in the relay teams, another nine will be part of the two relay squads of six each.

This will take the total number of Indian sportspersons for Rio Olympics to 114 as 105 have already qualified.

The Indian team will head to the Rio Games starting August 5.