Dempo SC consolidated their title chances when they scored an easy 3-0 win over bottom-placed HAL in the 21st round of the I-League football tournament in Margao.

Dempo, who led 1-0 at half time, scored through a double from Ranty Martins(12th, 60th) and substitute Yusuke Kato in the 89th minute at the Nehru Stadium in Fatorda.

With this win, Dempo, who is leading the table, took their tally to 46 points from 21 matches while HAL remained at the bottom with seven points from as many games and are certain to get relegated.

Dempo made their intentions clear as they worked with a lively pace and dominated the match. They made into the rival half with a steady flow of passes and surged ahead in the 12th minute from a penalty after missing couple of chances.

Peter Carvalho was brought down by rival defender Kenneh inside the box and referee Lalit Meetei awarded the penalty to Dempo which was ably converted by Martins.

Dempo kept up the pressure on the rival goal and created handful of scoring chances but Martins missed at least two glorious opportunities to increase the lead.

HAL goalkeeper Amar Deb should be credited for bringing of half a dozen saves as he denied Martins thrice.

Martins later increased the lead in the 60th minute when he chipped the ball over the HAL custodian to find the far corner of the net.

Substitute Kato then made it safe for Dempo when he guided the ball into the net from close range after receiving a pass from Koko.

Vineeth CK starred with a double as Chirag United Kerala defeated Shillong Lajong FC 3-2, in the 21st round of the I-League football tournament at the Jawaharlal Nehru International Stadium, in Kochi.

Vineeth scored twice while Nigerian David Sunday scored the other to ensure full three points for the host.

John D Menyongar and Boithang Haokip scored a goal each for Lajong.

Both the teams started on the aggressive note but failed to break the deadlock till the 45th minute.

When it seemed the half would end goalless, Chirag's top scorer of the season Vineeth scored the first goal for host in the injury time.

On resumption, Lajong came out with some resolution. Eugenson Lyngdoh in the 49th minute missed an open goal from close range.

Lajong kept up the pressure and were rewarded in the 59th minute when captain Menyongar reproduced a carbon copy of Chirag's opening goal by heading home from Eugenson Lyngdoh's corner.

But Lajong's joy was short lived, as Sunday produced a moment of brilliance to restore the home side's lead by lifting the ball over advancing Lajong goalkeeper Lalthuamawia Ralte into the goal.

Chirag went 3-1 ahead in the 75th minute when Vineeth scored his second with a neat tap in.

United SC dominated the proceedings and New Zealander headed in a Bello Rasaq clearance in the 42nd minute to draw first blood.

James Singh right-footer made it 2-0 from a Malswamtluanga cross in the 64th minute while Vincent rounded off the tally in the 82nd minute.

The Kiwi striker capitalised on a mispass from Mumbai FC defender Kevin Lobo to complete the rout, something that avenged their first leg defeat. 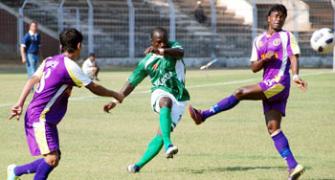