Riding on a brace from Nigerian striker Odafa Okolie, McDowell Mohun Bagan defeated Air India 3-1 at the Salt Lake Stadium, in Kolkata, to move up to 24 points in the I-League table.

Man of the Match Odafa scored one apiece for Bagan in both halves -- the first in the 41st minute and the second in the 84th minute. Ashim Biswas completed the rout for Bagan in the 80th minute. In between, Md. Safi had restored parity in the 54th minute. 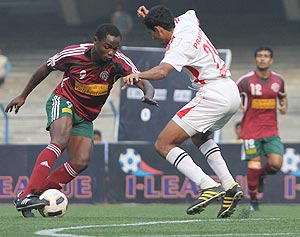 It was Odafa Okolie who opened the scoring for MMB in the 41st minute.

In the second half, Air India started on a positive note and were rewarded when Md. Safi went past Barreto to slot home past Bagan goalkeeper Sangarm Mukherjee in the 54th minute.

Just when it looked like Bagan would have to settle for another draw, Ashim Bsiwas put Bagan in the lead -- and with a gem off a goal. Odafa completed the rout in the 84th minute -- a solo effort which started just outside the box and ended in the net with four defenders and the goalkeeper beaten.

Churchill were hungry for a win after losing their last match against Pune FC, and they made their intentions right from the start when Opara opened the account in the eighth minute itself. From there on, it was Churchill Brothers all the way as Opara completed his hat-trick and substitute Bineesh Balan added two more goals to complete Churchill's biggest win of the season. Churchill led 3-0 at the change of ends.

Balan then added his name to the scoresheet as he turned home Steven Dias' remarkable cross from the right into the goal.

Balan made it 5-0 in the 75th minute as Rafi split the defence with a through ball and Balan completed the formalities.

The win took Churchill's points tally to 26 points but with Dempo Sports Club also registering a win against HAL in Bangalore had to settle for the second spot.

Dempo SC stayed on the top of the I-League table with a convincing 3-0 victory over HAL. After a barren first half, Dempo surged into the lead when Ranti Martins scored the opening goal in the 55th minute.

Ranti doubles the lead thirteen minutes later -- in the 68th minute. Climax Lawrence scored Dempo's third goal in the 90th minute. The lead keeps Dempo at the top of the I-League table with 27 points from 12 matches while HAL languish at the bottom of the table with 1 point from same number of matches.

Mumbai FC defeated Prayag United SC 3-1, in Pune, on Wednesday. Friday Gbeneme scored a brace for Mumbai in 5th and 70th minute, while S Kuttymani scored in the extra time for Mumbai. The solitary goal for Prayag was scored by Yusif Yakubu in 84th minute. 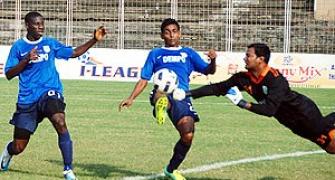 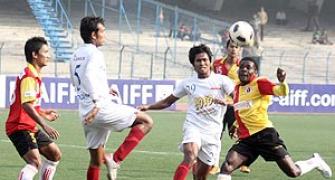 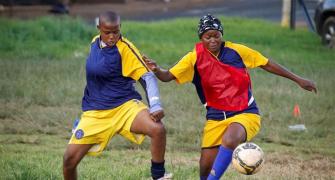 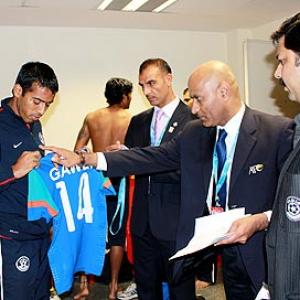