News
Business
Movies
Sports
Cricket
Get Ahead
Money Tips
Shopping
Sign in  |  Create a Rediffmail account
Rediff.com  » Sports » I did not think I was going to win a Slam this year: Serena 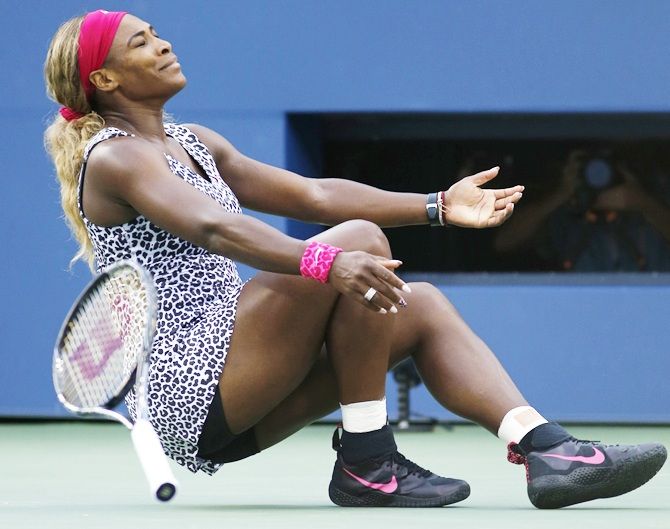 Serena Williams of the US celebrates after defeating Caroline Wozniacki of Denmark in their women's singles finals at the 2014 US Open. Photograph: Eduardo Munoz/Reuters

World No 1 Serena Williams swept past good friend Caroline Wozniacki 6-3, 6-3 in the US Open final on Sunday to move up in the record books with her 18th grand slam title.

It was the third straight and sixth overall US Open crown for the 32-year-old American, her 18 career Slams putting her alongside Chris Evert and Martina Navratilova for fourth place on the all-time list.

Failing to get beyond the last 16 of the year’s first three slams, Williams sailed through the US Open without dropping a set, finishing off Dane Wozniacki in a snappy 75 minutes.

"I have been trying to reach it for so long, since last year," said Williams, hoisting her first grand slam trophy since lifting the same trophy a year ago. "I didn't really think I would get there. I just felt so good.

"I definitely did not think I was going to win a Slam this year.

"To win the US Open, that was my dream. Every time I win here it's just a really incredible special moment for me.

"I'm just a simple individual who just wants to win titles and wants to play tennis. 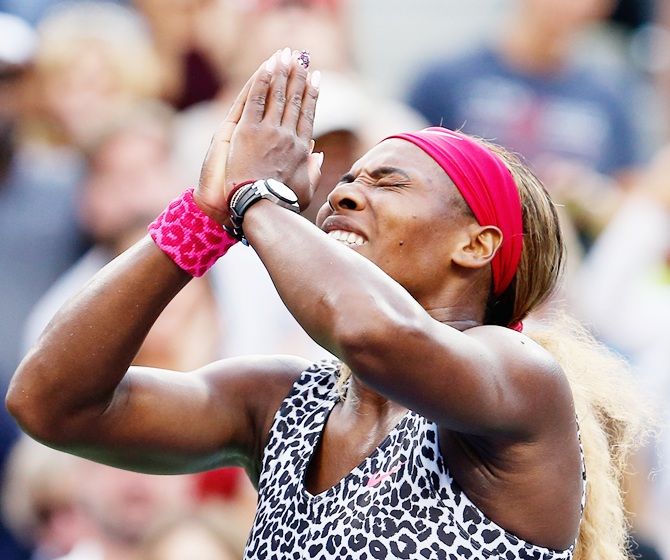 There was no joy, however, for Wozniacki.

Back in a Grand Slam final for the first time in five years, it was another frustrating end to a promising fortnight for the 10th seed as she once again left Flushing Meadows empty-handed, a major championship just beyond her grasp.

The title came with a massive pay-day for Williams, who pocketed the $3 million winner's purse along with a $1 million bonus for winning the US Open Series of hard court tournaments that form the buildup to the year's last Grand Slam.

As Williams received her cheques she was joined on court by Navratilova and Evert, who presented her with an 18-carat gold Tiffany bracelet as the newest member of their Grand Slam club.

"I just could never have imagined that I would be mentioned with Chris Evert or with Martina Navratilova, because I was just a kid with a dream and a racquet," said Williams. "Living in Compton, this never happened before.

"I just never could have imagined that it could have ended -- not ended. I'm just beginning."

‘When she's on her game it's not fun to play her’ 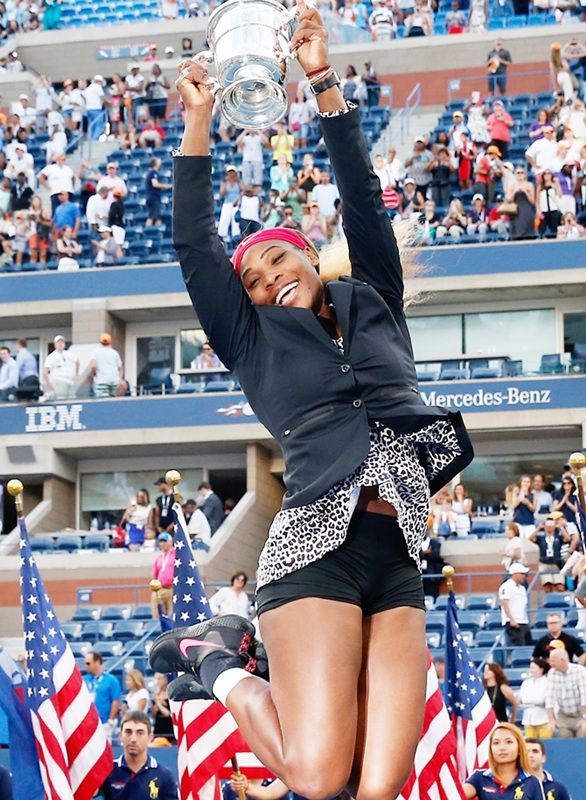 Serena Williams of the United States celebrates with the trophy. Photograph: Mike Stobe/Getty Images for USTA

The most difficult part of the match for Williams appeared to be beating a player she calls one of her best friends.

Williams and Wozniacki vacationed together this summer and the World No 1 said she exchanges text messages with the Dane daily.

But once the match began, Williams, who has often had to face off against her sister Venus, again proved there are no friendships on the court as she simply overpowered her 24-year-old opponent, firing 29 winners to just four by the Dane.

"When she's on her game it's not fun to play her," said Wozniacki, whose only other grand slam finals appearance also came at Flushing Meadows in 2009. "She's so strong. She has a good serve and she puts pressure on you straight away.

"When she needs to she can pull out that big serve. She has the power. She can push us back on the court and take the initiative.

"She definitely has the experience now, as well. I think that makes it even harder, because maybe back in the day she might have made not the right choices.

"Now she knows what she needs to do out there, and it makes it even harder to beat her." 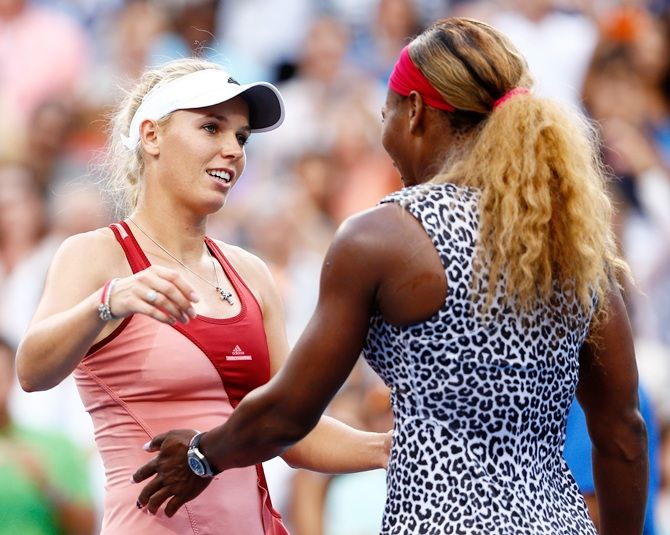 The showdown between the current and former world number ones was hardly a showcase of tennis excellence, particularly in a ragged opening set that featured five consecutive breaks.

Williams, dressed in the same leopard print tennis dress she wore to open the tournament, held her first serve before the two players struggled through the run of breaks with the American taking a 5-2 lead.

Not until the eight game did Wozniacki finally hold serve but by then Williams had begun to settle into the match, clinching the opening set with a blistering backhand winner.

Williams would keep up the pressure with a break to open the second and by the end had an exhausted Wozniacki running from corner-to-corner.

"After not playing the way she wanted in the first three (slams), I think she wanted to prove to herself and even play better in this one," shrugged Wozniacki. "Unfortunately I was the one on the other side of the net today.

"I would have liked maybe to have more of a chance today, but I didn't. Hopefully I'll get another one in Australia."

© Copyright 2021 Reuters Limited. All rights reserved. Republication or redistribution of Reuters content, including by framing or similar means, is expressly prohibited without the prior written consent of Reuters. Reuters shall not be liable for any errors or delays in the content, or for any actions taken in reliance thereon.
Related News: Serena Williams, Caroline Wozniacki, USTA, Chris Evert, Martina Navratilova
COMMENT
Print this article 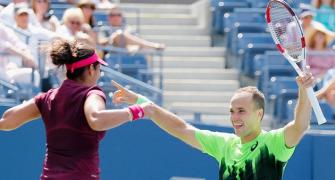 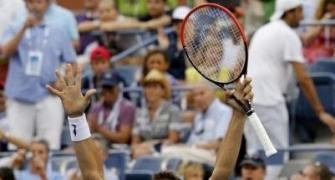 Cilic, Nishikori to clash in US Open final after upset victories 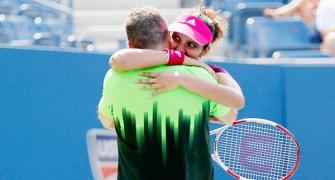 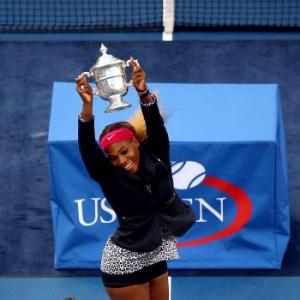 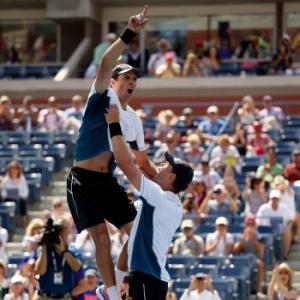