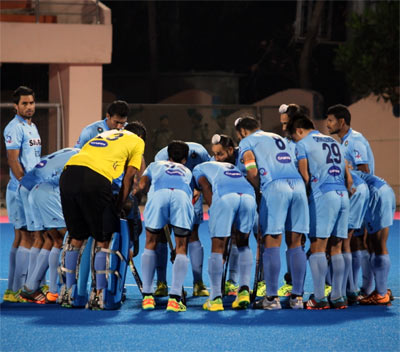 India beat Japan 2-1 in the third hockey Test to take an unassailable 2-0 lead in the four-match series, in Bhubaneshwar, on Thursday.

Drag-flicker V R Raghunath scored one while Akashdeep Singh displayed brilliant stick-work to score the second goal for his team. Japan's Hirotaka Wakari pulled one back for the visitors.

In the first quarter of the match, it was Japan, who put pressure on the Indian defence with their long passes. But Birendra Lakra, K Chinglensana and Raghunath foiled Japanese raids with a lot of confidence.

Led by skipper Sardar Singh, India went on the counter with the help of short passes.

In the second quarter, both the teams showed positive intent to create more chances. In the 19th minute, Japan's Tomonori Ono ran down

the left flank where he found his team mate Hiroki Sakamoto in the circle, who took a reverse shot but that was nicely blocked custodian Harjot SIngh.

In the 30th minute, India earned their first penalty corner after a quick attack. Dharamvir Singh pushed the ball in and Raghunath dragged it on the right of the Japanese goalie Suguru Shimmoto, who tried to stop it with his right hand but the ball deflected before crashing into the back of the net.

In the 36th minute of the third quarter, Akashdeep Singh dribbled past a host of Japanese defenders before slotting it past the hapless goalkeeper.

However, the joy was short-lived as Japan managed to earn a penalty corner in the 44th minute, which was perfectly converted by Wakari. But India managed to defend their slender lead to clinch the series with the fourth match turning out to be inconsequential.
Source: PTI© Copyright 2020 PTI. All rights reserved. Republication or redistribution of PTI content, including by framing or similar means, is expressly prohibited without the prior written consent.
Related News: Japan, R Raghunath, India, Hirotaka Wakari, Suguru Shimmoto
SHARE THIS STORYCOMMENT
Print this article