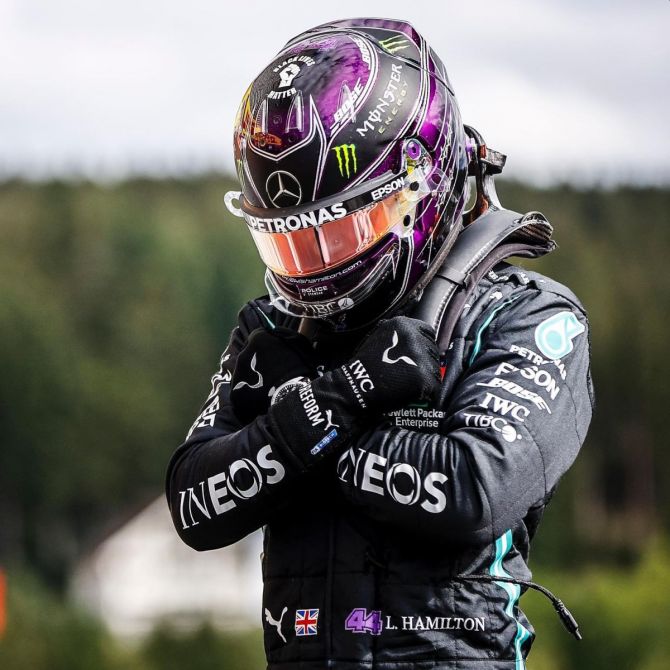 IMAGE: Saturday's pole was a record-extending 93rd of Lewis Hamilton's career and he dedicated it to 'Black Panther' actor Chadwick Boseman who died of colon cancer on Friday. Photograph: Kind courtesy Lewis Hamilton/Facebook

Lewis Hamilton stormed to a dominant pole position in qualifying for the Belgian Grand Prix on Saturday ahead of team mate Valtteri Bottas who completed a front-row lockout for Mercedes while rivals Ferrari endured a miserable day.

The Briton, who leads the overall standings by 37 points from Red Bull's Max Verstappen, lapped the seven-km Spa-Francorchamps track in a record time of one minute 41.252 seconds, 0.511 seconds clear of Bottas.

Verstappen was once again best of the rest in third for Red Bull. The Dutchman was 0.526 seconds off Hamilton's pace.

Saturday's pole was a record-extending 93rd of Hamilton's career and he dedicated it to 'Black Panther' film star Chadwick Boseman who died of colon cancer on Friday.

‘I want to dedicate this pole to Chadwick. This has been such a heavy year for all of us but hearing that news this morning really hurt. What he accomplished and the legacy he left is so incredible to me. He’s inspired a whole generation of young black men and women and provided them with a true superhero to look up to. Rest in power my friend. #WakandaForever #blackpanther,’ he wrote on his Facebook page.

It was the 35-year-old's fifth pole from seven races this season and a record-extending sixth at the Spa-Francorchamps track.

Hamilton, who had also topped Saturday morning's final practice session, never look like being challenged throughout the qualifying hour.

He was fastest in all three parts of qualifying, giving his Mercedes team's 'party mode' power unit setting, which will be banned from the next race in Monza, a fitting send-off.

Alexander Albon in the other Red Bull was fifth ahead of Ricciardo's team mate Esteban Ocon.

Carlos Sainz was seventh for McLaren ahead of Racing Point duo Sergio Perez and Lance Stroll, while Lando Norris rounded out the top 10 for McLaren.

Ferrari, winners in Belgium for the last two years, had gone into qualifying facing the prospect of a knockout in the first part after a dismal practice showing in which four-time champion Sebastian Vettel was last.

They survived the opening 18 minutes but failed to make it through to the pole-position shoot-out.

Charles Leclerc, who took his maiden Formula One win in Belgium last year, was 13th with Vettel, who is leaving Ferrari at the end of the year, 14th.

© Copyright 2021 Reuters Limited. All rights reserved. Republication or redistribution of Reuters content, including by framing or similar means, is expressly prohibited without the prior written consent of Reuters. Reuters shall not be liable for any errors or delays in the content, or for any actions taken in reliance thereon.
Related News: Lewis Hamilton, Chadwick Boseman, Red Bull, Ferrari, Sebastian Vettel
SHARE THIS STORYCOMMENT
Print this article 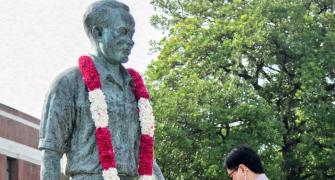 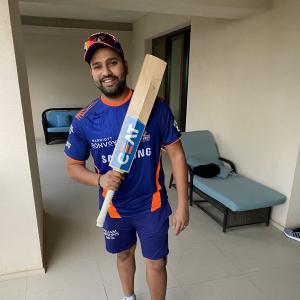