Play was suspended at 1:36 pm British time (1236 GMT) due to the threat of lightning under darkening clouds early in Thursday's first round at the US Open golf championship.

The siren sounded after just under two hours of play had been possible at rain-softened Merion Golf Club where severe thunderstorms and high winds have been forecast for later in the day.

Englishman Ian Poulter was the early leader in the year's second major at three under par, having birdied his first three holes after teeing off at the par-four 11th. 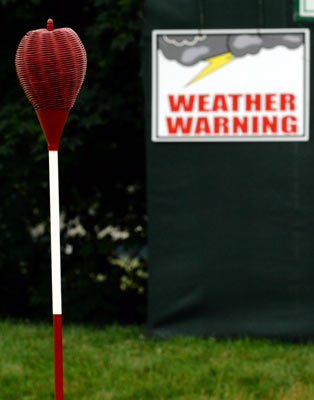 Englishman Justin Rose had lined up a slick 15-foot downhill birdie putt at the par-four 15th shortly before play was suspended.

After barely touching the ball, he watched as his birdie attempt rolled two feet past the hole and then horseshoed out with his par putt to slip to one over for the round before the siren sounded to halt play.

Tournament favourite and world number one Tiger Woods was among the late starters, set to tee off with second-ranked Rory McIlroy and Masters champion Adam Scott on the first tee at 1:14 pm (1714 GMT) in the most eye-catching trio of the day.

However, Woods and company may not even tee off on Thursday with a derecho, a widespread windstorm associated with a fast-moving band of severe thunderstorms, expected to hit the Philadelphia area in the afternooon.

As much as three inches (7.6 cms) of rain has been forecast for the day, and Merion Golf Club's iconic par-70 East Course has already been saturated with more than six inches since Friday.

Though the layout drains extremely well, the biggest concern for organisers is the green and greenside bunker at the 11th hole, the lowest point on the course.

Extra care has been taken over the location of pin positions on greens more susceptible to puddles, while the safety of players and spectators has been paramount in contingency plans.

Image: A weather warning sign is seen near the first green during Round One of the 113th US Open at Merion Golf Club in Ardmore, Pennsylvania.

© Copyright 2022 Reuters Limited. All rights reserved. Republication or redistribution of Reuters content, including by framing or similar means, is expressly prohibited without the prior written consent of Reuters. Reuters shall not be liable for any errors or delays in the content, or for any actions taken in reliance thereon.
Related News: Merion Golf Club, Tiger Woods, Charl Schwartzel, Tim Clark, GMT
COMMENT
Print this article