News
Business
Movies
Sports
Cricket
Get Ahead
Money Tips
Shopping
Sign in  |  Create a Rediffmail account
Rediff.com  » Sports » Golf: Justin Thomas back at No 1 after winning in Memphis

Golf: Justin Thomas back at No 1 after winning in Memphis 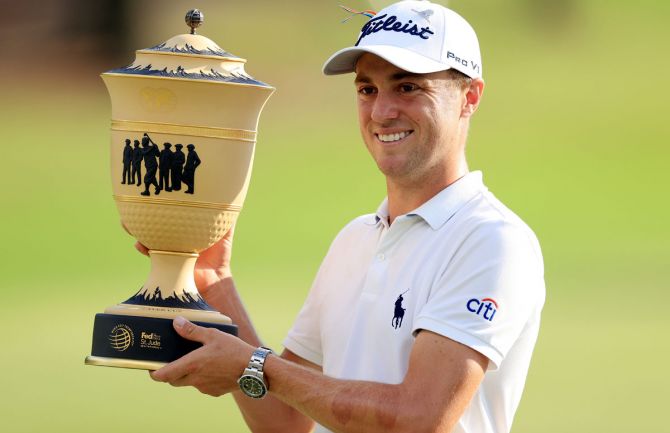 Justin Thomas clinched his 13th PGA Tour victory on Sunday, winning the WGC FedEx St. Jude Invitational by a three-stroke margin and claiming the world number-one ranking in the process.

The 27-year-old American put up a near-flawless, five-under par 65 to win at TPC Southwind in Memphis, Tennessee, with a four-way tie for second place between Americans Daniel Berger, Phil Mickelson and returning champion Brooks Koepka, as well as England's Tom Lewis.

Thomas and Koepka, who were 202 and 201 through 54 holes, respectively, went toe-to-toe in the final round, with Koepka draining a more than 39-foot putt for birdie on 17.

But Thomas, who locked in four birdies on the front nine, kept his nerve for the win, his first since the tour returned from a coronavirus hiatus.

The win cut short Jon Rahm's reign at the top of the rankings, with the 25-year-old Spaniard spending just two weeks as the world number one.

"It was a hard-fought day," said Thomas. "Besides that terrible wedge on 12, I played so well for 14 holes. I drove the ball just perfectly ... I realistically could have birdied my first 10 holes today and that is kind of bizarre to say."

Any hope Koepka had of claiming a last-minute victory evaporated on 18, as he drove his ball into the water for a double-bogey.

"I feel good. I feel like my game's right there, everything's solid. I hit a lot of good putts today, just didn't go in," said Koepka. "Obviously drained a big one on 17 and then you're down one. You've got to take an aggressive line on 18, so it is what it is."

An electrifying performance with five birdies on the front nine helped Lewis (66) to surge up the leaderboard in early play on Sunday, after he carded nine-under par 61 on Saturday, but a pair of bogeys on 13 and 17 had him settling for second.

Brendon Todd, the leader heading into Sunday, carded a disastrous five-over par 75, losing his edge and shooting three straight bogeys on 13 through 15.

Rickie Fowler started the day in contention for the win but finished the final round with a disappointing three-over par 73, thwarting his attempt to pick up his first PGA Tour victory since last year's Waste Management Phoenix Open.

Kang holds on for one-shot win at Drive On Championship IMAGE: Danielle Kang Kang held her nerve through to the finish with four straight pars to win the Drive On Championship in Toledo, Ohio. Photograph: Gregory Shamus/Getty Images

Danielle Kang held her nerve to claim a one shot victory over France's Celine Boutier at the Drive On Championship on Sunday, as the LPGA Tour made a dramatic return from a near six-month COVID-19 shutdown.

The final round at drizzly Inverness Club, Toledo, Ohio began with Kang, Boutier, and Britain's Jodi Ewart Shadoff all sharing the lead and ended in sunshine with the American on top after carding a two-under 70.

Tough scoring all week at the iconic Inverness Club, which has hosted four US Opens and two PGA Championships, saw only four players finish under par, Kang's six-under 209 total enough to earn the world number four her a fourth career LPGA Tour title.

Boutier mounted a back nine charge but stalled over the closing holes signing for a one-under 71 for a runnerup total of 210 followed by Australia's Minjee Lee, who birdied three of her final four holes for a 70 to sit alone in third on 212 three back of the winner.

"I knew where I was standing with three holes left and I wanted to know where I was on the final hole stretch," said Kang. "You have to respect the golf course and that's what I tried to do even the little putts I didn't take for granted."

Kang got off to a hot start with birdies at the second and fourth to surge clear at the top of the leaderboard.

Working on an error free day Kang opened up a three shot cushion with her third birdie of the day at the 11th before things began to tighten.

As Kang took her first bogey at 13 Boutier had already stepped up the pressure with back-to-back birdies at 11 and 12 to chop the American's lead to one.

After Boutier rolled in a seven-foot birdie putt at the 14th to join Kang top the leaderboard the battle for the title had boiled down to two women with four play.

The Frenchwoman was the first to blink with a bogey at 15 while Kang would hold her nerve through to the finish with four straight pars.

© Copyright 2022 Reuters Limited. All rights reserved. Republication or redistribution of Reuters content, including by framing or similar means, is expressly prohibited without the prior written consent of Reuters. Reuters shall not be liable for any errors or delays in the content, or for any actions taken in reliance thereon.
Related News: Celine Boutier, Brooks Koepka, Justin Thomas, LPGA Tour, Danielle Kang Kang
COMMENT
Print this article