Luton Town made a mockery of the 85 places between themselves and Norwich City to become the first minor league club to beat a top-flight side in the FA Cup for 24 years on Saturday.

Scott Rendell scored 10 minutes from time to earn the fifth-tier side a 1-0 win at Norwich's Carrow Road stadium and leave another indelible mark in the competition's giant-killing history.

Premier League Queens Park Rangers also suffered a humiliating 4-2 exit at the hands of third tier Milton Keynes Dons to pile on the misery for the struggling London club who are mired deep in a relegation battle.

Drama was in short supply at Old Trafford where Manchester United sauntered past Fulham 4-1 after Ryan Giggs had put the Premier League leaders ahead with a third-minute penalty.

They were joined in the fifth round by champions Manchester City who won another all top flight clash against Stoke City 1-0 courtesy of a late strike from Pablo Zabaleta.

Second tier Brighton and Hove Albion pushed Arsenal all the way on the south coast before substitute Theo Walcott scored in the 85th minute to edge his side to a 3-2 win.

Everton's John Heitinga scored in the 90th minute as the Premier League side beat Bolton Wanderers 2-1.

Not since Sutton United beat Coventry City in the third round in January 1989, had a club from outside the top four divisions overcome top-flight opposition in the FA Cup.

Sutton's run that year ended in an 8-0 thumping by Norwich but the Canaries were on the receiving end this time round.

Luton, relegated from the old first division in 1992 and dumped out of the Football League in 2009, lie sixth in the fifth tier of English football.

Norwich had made six changes from the team that lost 5-0 to Liverpool in the Premier League last week in a clear statement of where the competition ranked in the club's priorities.

For 1959 FA Cup runners-up Luton, the occasion was a far cry from their last match, a 0-0 draw with Telford in the Blue Square Premier division.

The gap between the two sides, however, meant little as Luton held off a their opponents before striking late in the second half when Rendell steered home JJ O'Donnell's low cross.

"It's a lot to take in. The players were tremendous today," said Luton manager Paul Buckle, whose team beat second tier Wolverhampton Wanderers in the third round. "They held a Premier League team for 90-plus minutes.

"It's a huge day for them, for me and for our supporters. Norwich pushed us all the way but we were good for the win in the end. Scotty scored, it's what he does best, but everyone played their part."

The Premier League's bottom club QPR played a second-string team against MK Dons and were comprehensively outplayed by a side 31 places below them in English leagues.

QPR retained only two players from the side that drew 1-1 with West Ham United in the Premier League last Saturday, and were behind after four minutes when Armand Traore put through his own net.

Ryan Lowe latched on to a ball over the top and rifled home a second five minutes before the break, Ryan Harley made it three and Darren Potter profited from appalling QPR defending to fire home a fourth.

The hosts salvaged pride with late goals from Jay Bothroyd and Fabio, although the late rally did little to appease Rangers manager Harry Redknapp.

"It was bitterly disappointing, there is no excuse for conceding four goals at home to MK Dons. It was disgusting," Redknapp said.

Manchester United, seeking a 12th FA Cup triumph but a first since 2004, were far too strong for a woeful Fulham side.

The only surprise was that they were so slow to add to Giggs's penalty, although two goals from Javier Hernandez and one for Wayne Rooney put the Reds in cruise control before a Fulham consolation from Aaron Hughes.

Neighbours City were made to work hard in a dour clash with Stoke but Zabaleta's late winner spared them a replay.

City enjoyed the majority of the possession and created the best opportunities but could not find a chink in the home team's armour until the 85th minute when Zabaleta arrived late in the area to poke home at the far post.

"It's a massive win on a tough pitch and it's difficult to win here," Argentine full back Zabaleta told ITV.

Arsenal were taken the distance by Brighton, who twice came back from Olivier Giroud goals before conceding a decisive third to Walcott with five minutes remaining.

Elsewhere, minor league Macclesfield's run was stopped in a 1-0 defeat by Wigan Athletic.

© Copyright 2022 Reuters Limited. All rights reserved. Republication or redistribution of Reuters content, including by framing or similar means, is expressly prohibited without the prior written consent of Reuters. Reuters shall not be liable for any errors or delays in the content, or for any actions taken in reliance thereon.
Related News: Norwich, Zabaleta, Luton, QPR, Bolton Wanderers
COMMENT
Print this article
Zabaleta stuns Blake to set up Karlovic final
Liverpool rout Luton in FA Cup 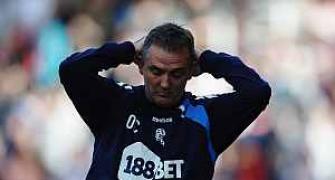 Van Persie double in vain as Arsenal held by Norwich