IMAGES from Day 2 of the 2022 French Open at Roland Garros in Paris on Monday. 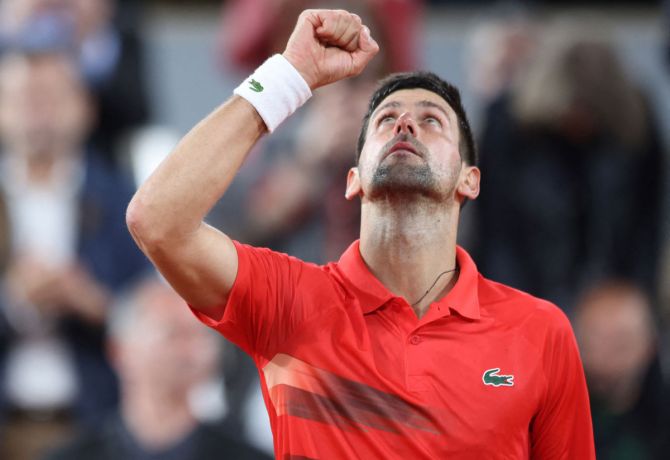 World number one and holder Novak Djokovic cruised past Japan's Yoshihito Nishioka 6-3, 6-1, 6-0 on Monday to advance to the French Open second round in a comfortable start to his quest for a record-equalling 21st Grand Slam.

The Serb, who turned 35 on Sunday, needed less than two hours to beat the Japanese world number 99 in his first Grand Slam this year after missing the Australian Open.

"I have to be pleased with the match. I struggled to adapt in the first set. He is a very quick player. The first set was close but I cruised through the second and third," Djokovic told reporters.

"I always expect the highest for myself but it was a very good start."

Fresh from his Italian Open victory without dropping a set eight days ago, the defending champion broke Nishioka, who deployed a risky strategy of playing tight angles from the start, to move 4-2 up.

Djokovic, unable to defend his Australian Open title due to his refusal to be vaccinated against COVID-19 and his subsequent deportation amid a media frenzy, squandered a set point at 5-2 but comfortably held serve to close it out.

The Serb was never really troubled by Nishioka and galloped through the next two sets, dropping one game in the process.

He wrapped up the contest when Nishioka sent another forehand long to advance to round two as he looks to match fellow title favourite Rafael Nadal's 21 Grand Slam wins.

"I looked forward to getting out on court," Djokovic said. "I have been feeling well on clay in the past few weeks. I am happy to be back. The memories from last year are fresh in my mind."

Rafael Nadal showed no signs of pain as the 13-time French Open champion marched into the second round at Roland Garros with clinical 6-2, 6-2, 6-2 demolition of Australian Jordan Thompson on Monday.

The Spaniard, who had never arrived in Paris as unprepared as this year after a rib injury and a chronic foot problem hampered the build-up to his beloved Grand Slam tournament, was never bothered on a chilly court Philippe Chatrier.

"It's incredible for me to play here again on Chatrier. I'm happy with this win. First round is always special," said Nadal.

The 35-year-old, who has a record 21 men's Grand Slam titles to his name, played down the chances of adding to his tally but his display was reminiscent of those of previous years.

Nadal broke for 2-1 with a backhand volley winner and his massive forehand helped him quickly move 4-1 up against an overwhelmed opponent.

The fifth seed looked to finish off some points quickly and made several unusual unforced errors, but they were of little consequence as he breezed through the opening set.

Nadal broke serve in the first game of the second set and again in the fifth and seventh as he started to play more neatly, bagging it with a service winner.

Thompson, who pulled a break back, looked completely worn out by then but managed to hold it together until 2-2, when Nadal broke with a forehand volley and won all the rest of the games.

Japan's Naomi Osaka crashed out of the French Open in a 7-5, 6-4 first-round loss to American Amanda Anisimova on Monday, a year after her dramatic withdrawal from the claycourt Grand Slam tournament amid mental health issues.

Up against 27th seed Anisimova, four-time Grand Slam champion Osaka never looked comfortable on her least favourite surface as she struggled to control her powerful game.

The first three games all went against serve in a tense start but Anisimova held to go 3-1 ahead.

A backhand error by Anisimova allowed Osaka to level for 3-3, but a double fault in the 11th game allowed Anisimova to move 6-5 up and she held serve to love to take the set.

After a couple of match points went begging, Anisimova finished it off with a stunning backhand winner down the line.

Osaka withdrew from the tournament in 2021 after boycotting post-match media duties for mental health reasons.

In the build-up to last year's French Open, Osaka said she would not attend the obligatory news conferences for players after matches as they impacted her mental wellbeing.

The Japanese, who at that time revealed she had been suffering from depression for almost three years, returned to competitive tennis at the Tokyo Olympics after the saga cast a spotlight on players' post-match media duties.

Roland Garros organisers conceded they could "do better" on mental health this year. 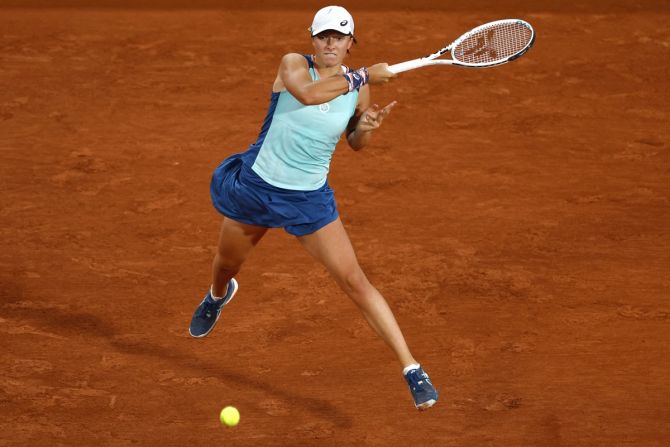 World number one Iga Swiatek put on a commanding display against Ukrainian qualifier Lesia Tsurenko with a 6-2, 6-0 opening victory to kickstart her bid for a second French Open title and extend her winning run to 29 matches.

Swiatek, who won the 2020 Roland Garros title without dropping a set, arrived in Paris having won her last five tournaments, including four WTA 1000 events, and is the overwhelming favourite to lift the Suzanne Lenglen Cup again.

"I just want to keep going. I am aware that someday my streak may stop," Swiatek said on court. "Basically I am just working every day to be 100% focused on my tennis, not on stats or not on some numbers."

"Just playing tennis and focusing on my game and being kind of in a bubble. That's going to help me be consistent. That's what I've been doing the past weeks and I'm going to continue doing that here."

On a rainy morning the Pole, who will turn 21 next week, opened play under the closed roof of Court Philippe Chatrier and got off to a blazing start in her first meeting against Tsurenko, who is ranked 119th in the world.

She was broken while serving for the opening set at 5-1 but Swiatek stepped up to break the 32-year-old Tsurenko to love in the next game to bag the set in 28 minutes.

Swiatek, who continued sporting a blue and yellow ribbon on her cap in support of Ukrainian people affected by Russia's invasion, did not lose another game in the match and wrapped up the contest in 54 minutes on her third match point with a forehand down the line winner -- her 20th of the match.

"I am really happy that I finished early. I have some media, exciting stuff, and then maybe we will go somewhere in Paris to see something," said Swiatek, who will next face the winner of the match between Alison Riske and Dayana Yastremska.

Barbora Krejcikova's French Open title defence ended in the opening round on Monday as local hope Diane Parry was roared to a 1-6, 6-2, 6-3 victory against the second-seeded Czech.

Krejcikova, who defeated Russian Anastasia Pavlyuchenkova in the 2021 final to win her maiden Grand Slam title, arrived at Roland Garros without any competitive matches under her belt since February due to an elbow injury.

But she breezed through the opening set against the 97th-ranked Parry, who was facing a top-10 opponent for the first time in her career, in 34 minutes before her rustiness showed.

The 19-year-old Parry turned the match on its head by winning the second set as errors and double faults began to creep into Krejcikova's game.

Krejcikova took a lengthy break after losing the second set and was booed by the partisan French crowd at the Court Philippe Chatrier on her return.

The 26-year-old Czech got an early break in the deciding set but Parry, urged on by the crowd, levelled things at 2-2 and then got the decisive break in the eighth game.

Krejcikova found the net on match point for her 45th unforced error as Parry completed a remarkable victory with the crowd chanting 'Parry, Parry' throughout the contest.

"It's a dream for me. It was always a dream to play on this court with the French crowd to support me," Parry said during an interview on court.

"They clearly pushed me to victory today. I'm the happiest person right now. It's never easy to start on this kind of court against the defending champion, you can get a bit tight, which happened in the first set but then I managed to relax."

She will play Colombian Camila Osorio for a place in the third round. 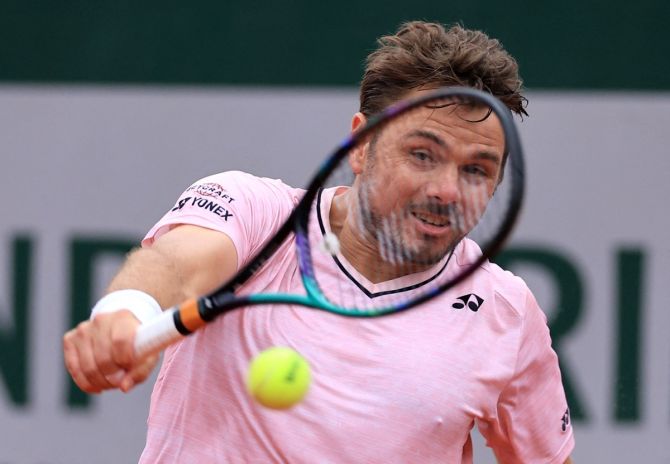 Three-time major champion Stanislas Wawrinka crashed out of the French Open in the first round to Frenchman Corentin Moutet in his first Grand Slam appearance in 18 months.

"I started well and it was a good first set but unfortunately it was disappointing to lose," Wawrinka told a news conference.

Wawrinka had only returned to action at a Challenger Tour tournament in March, yet it all started well for the Swiss, the winner in Paris in 2015.

He showed no lingering effects from his injury when he had to stretch in a full sprint to whip a stunning forehand down the line to earn a quick early break and go 3-1 up in the first set.

Two consecutive double faults by wildcard Moutet handed the first set to Wawrinka but the tables were turned with the Frenchman bagging the second set after mixing it up and charging to the net more often.

Moutet broke the Swiss again to take the lead in the third as Wawrinka's first serve faltered and unforced errors began to rise.

"The frustration does not come from a comparison of my past level but because I know I could have done more and that some things did not go well," Wawrinka said.

Moutet wasted two set points at 5-2 and survived a brief Wawrinka comeback before clinching the third comfortably in the tiebreak and racing through the fourth to book a spot in the second round. 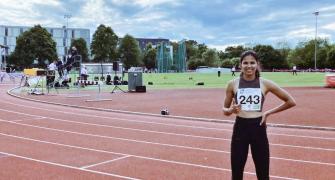 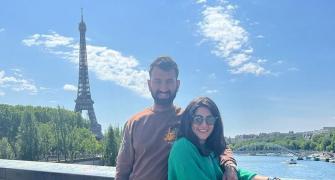 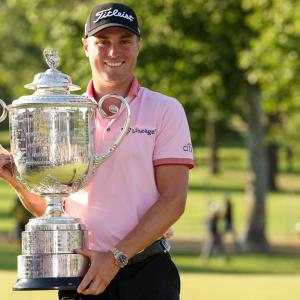 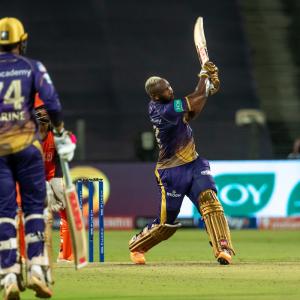