Move Over Messi, Argentina Has A New Hero

IMAGE: Emiliano Martínez's opening save from Virgil van Dijk was at full stretch and set the tone for the Argentina-Netherlands quarter-final. Photograph Elsa/Getty Images

Move over Lionel Messi, Argentina have a new hero who answers to the call of Emiliano Martínez.

Martínez saved two attempts in the penalty shootout in the FIFA World Cup quarter-final on Friday to keep Messi's chances at a World Cup win alive.

This is not the first time that Martínez has been on the money with his dives and saves.

The Aston Villa 'keeper saved three penalties in the 2021 Copa America semi-final and Argentina went on to lift the trophy. Now he's stopped two more in a World Cup quarter-final and this could just be a good omen for Messi!

Argentina play Croatia in the semi-finals on Tuesday after the 2018 runner-up beat Brazil on Friday. 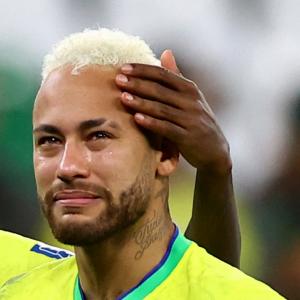 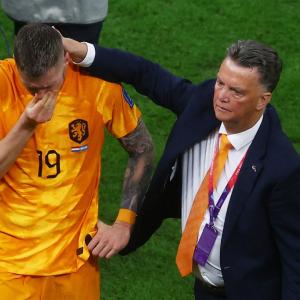