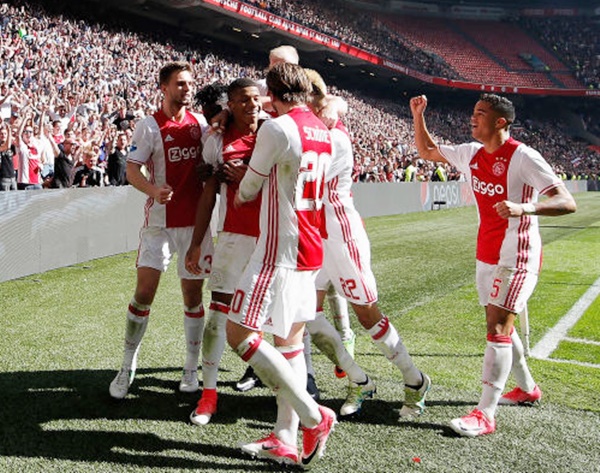 Ajax Amsterdam produced a performance worthy of the club's illustrious past when they crushed Olympique Lyonnais 4-1 on Wednesday to move to the brink of their first European final since 1996.

Bertrand Traore led the way with two goals in an enthralling, end-to-end Europa League semi-final first leg in which the Dutch side fielded a starting line-up with an average age of under 22 years old.

Danish teenager Kasper Dolberg and Amin Younes also netted for Ajax while Mathieu Valbuena replied for the French visitors who could easily have scored three or four goals themselves.

Four-times European champions Ajax were once one of Europe's biggest clubs but are no longer able to compete financially with teams from England, Spain and Germany.

Their last European final appearance was in the Champions League in 1996 when they lost to Juventus on penalties.

In a raucous atmosphere, the visitors had the best of the opening 20 minutes, pressing Ajax high up the pitch and making it difficult for the hosts to get out of their own half.

But the game turned completely after Ajax went ahead against the run of play in the 25th minute, Traore getting a glancing header to Hakim Ziyech's inswinging free kick to guide the ball past goalkeeper Anthony Lopes.

The Burkinabe forward, on loan from Chelsea, also set up Ajax's second nine minutes later when he headed a poor Lopes clearance into the path of Dolberg, who drilled a low shot past the Portuguese keeper.

Ajax extended their lead four minutes after the re-start when Ziyech played the ball through to Younes, who beat Lopes with a deflected shot.

The ball was hooked away by a defender and the goal was awarded without the help of goal-line technology which is not used in the Europa League.

Valbuena reduced the arrears in the 66th minute, scoring from the edge of the area after a headed clearance landed at his feet. Nabil Fekir nearly grabbed a second for Lyon shortly afterwards but was denied by Andre Onana.

Both teams continued to go forward with Onana making a double save to deny Lyon while Ajax had a succession of counter-attacks but were repeatedly foiled by Lopes in a breathless finale.

Spanish side Celta Vigo host England's Manchester United in the first leg of the second semi-final on Thursday.

© Copyright 2021 Reuters Limited. All rights reserved. Republication or redistribution of Reuters content, including by framing or similar means, is expressly prohibited without the prior written consent of Reuters. Reuters shall not be liable for any errors or delays in the content, or for any actions taken in reliance thereon.
Related News: Ajax Amsterdam, Hakim Ziyech, Anthony Lopes, Europa League, Bertrand Traore
COMMENT
Print this article