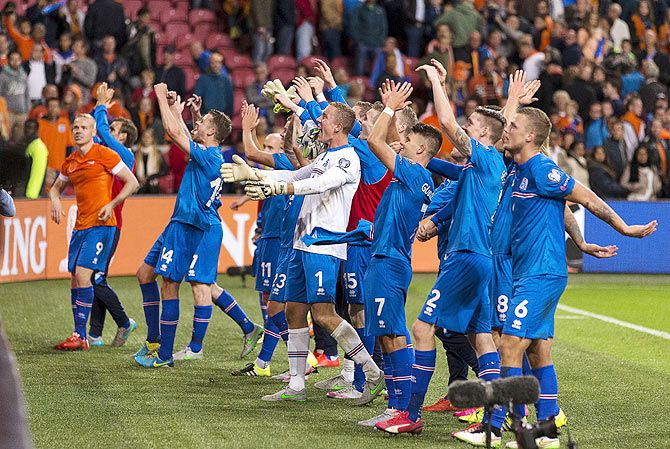 Iceland's team celebrate their victory over the Netherlands after their Euro 2016 qualifying match in Amsterdam, the Netherlands on Thursday. Photograph: Michael Kooren/Reuters

The Netherlands, just over a year after finishing third at the World Cup, have resigned themselves to battling for the third place in their Euro 2016 qualifying group and the prospect of playoffs after a horror debut for new coach Danny Blind.

Thursday's 1-0 home loss to Iceland left the Dutch third in their group standings and facing a key match against Turkey, who are only one point behind them, on Sunday.

"The reality is now we have to go for the third place. That’s the option we have left," said Blind, although mathematically the Dutch could yet win Group A but only if leaders Iceland and the second placed Czech Republic implode in their last three qualifiers.

The top two qualify automatically for the finals in France next year while all but the best third placed finisher proceed to play-offs in November.

Blind had scathing words for both defenders Bruno Martins Indi, sent off just past the half-hour mark, and Gregory van der Wiel, who gave away a penalty early in the second half.

It all went wrong for the Dutch when new captain Arjen Robben went off injured in the 27th minute followed six minutes later by Martins Indi's exit.

"It was unbelievably unprofessional, something to the detriment of the whole team. That was the turning point of the game," said Blind of the 33rd minute sending off of his central defender for lashing out at an opponent.

Italy need over an hour to break down defiant Malta 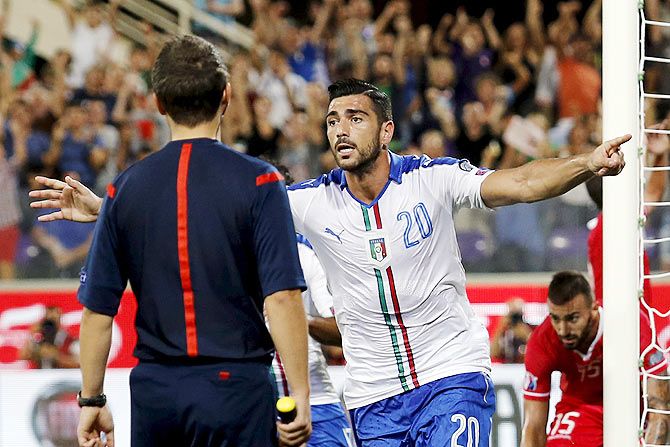 Italy needed 69 minutes to break down a stubborn, tenacious Malta before Graziano Pelle struck to give them a 1-0 win in their Euro 2016 qualifier on Thursday.

Italy, without a win in their previous four matches, struggled to find a way through a massed Maltese defence in front of a sparse crowd at the Artemio Franchi stadium.

The win took them top of Group H with 15 points from seven games, one more than Croatia who drew 0-0 in Azerbaijan earlier on Thursday.

Pelle, who scored the only goal when Italy won by the same score in Malta earlier in the group, was in the thick of the action for Italy as he had a shot deflected over the crossbar and headed over from a corner early on.

Malta, bottom of the group with one point, nearly took a sensational lead just before the half hour when Alfred Effiong curled a shot just wide of Gianluigi Buffon's far post.

As Italy continued to press forward, Pelle headed wide from an Andrea Pirlo free kick and then Malta goalkeeper Andrew Hogg did well to parry away Andrea Bertolacci's deflected shot.

Eder had Italy's best first-half effort when his low effort went just wide of the post after a run from midfield.

Malta continued to defend tenaciously after halftime and Italy struggled to create openings despite their overwhelming dominance. 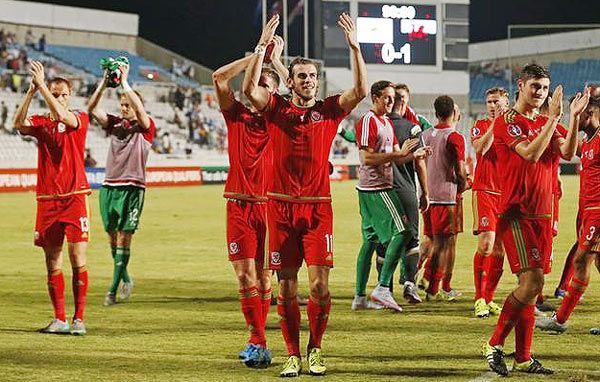 Wales' Gareth Bale and teammates celebrate at the end of the match against Cyprus at GSP Stadium, Nicosia, in Cyprus. Photograph: Andrew Boyers/Action Images via Reuters Livepic

Gareth Bale's late header gave Wales a 1-0 win over Cyprus in their Euro 2016 Group B qualifier on Thursday and kept them on course for their first major finals since the 1958 World Cup.

Wales, who have 17 points from seven games, can clinch a place at the finals in France if they beat Israel at home on Sunday. Belgium are second on 14 after beating Bosnia 3-1.

Wales thought they had taken the lead in the 27th minute when David Edwards headed home a Bale cross but their joy was short-lived as Polish referee Szymon Marciniak disallowed the goal ruling that forward Hal Robson-Kanu had pushed a defender.

Cyprus, harbouring hopes of a third-place finish which brings a playoff spot, matched Wales for most of the first hour before fading but came close to an equaliser after 87 minutes when substitute Pieros Sotiriou's attempt went just wide.

De Bruyne scores as Belgium get back on track 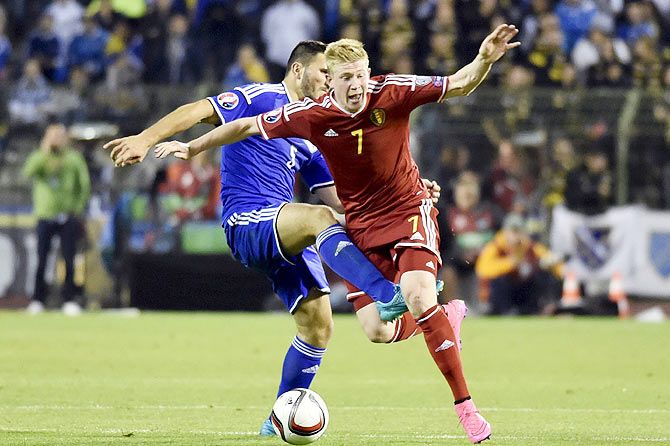 Manchester City's new record signing Kevin De Bruyne was on target as Belgium put their Euro 2016 qualifying campaign back on course with a 3-1 victory over Bosnia on Thursday.

The home team, who lost at Group B leaders Wales in June, had a wealth of possession but struggled to break down a well-organised Bosnia who also threatened on the counter attack through the menacing Edin Dzeko.

Dzeko opened the scoring with his fifth goal against Belgium, floating in a header after Mensur Mujdza was allowed to advance unchallenged.

Belgium, however, went into halftime 2-1 up thanks to a thunderous header from a corner by Marouane Fellaini and a sharp turn and shot from De Bruyne who joined City last month for an estimated 50 million pounds ($76.26 million).

The hosts needed ’keeper Thibaut Courtois to be in top form. He saved a cracking drive from Haris Medunjanin before Chelsea team mate Eden Hazard won and converted a penalty in the 78th minute to calm the nerves of the fans.

Belgium showed signs of missing injured striker Christian Benteke. Replacement Romelu Lukaku offered a similar aerial threat but was less comfortable holding the ball with his back to goal.

Wales top the group with 17 points after a 1-0 victory in Cyprus. Second-placed Belgium trail by three points with three matches left while Bosnia are fifth on eight.

The Welsh entertain third-placed Israel on Sunday, the same day as Belgium travel to Cyprus. The top two automatically go through to the finals in France. 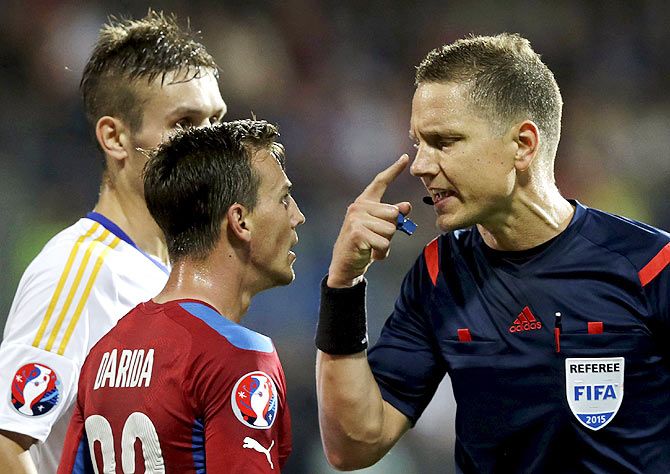 The Czech Republic snatched a 2-1 come-from-behind win against Kazakhstan thanks to two late second-half headers from substitute Milan Skoda on Thursday to stay firmly on track for the Euro 2016 finals in France.

The second-placed Czechs have 16 points and remain two behind Group A leaders Iceland, who won 1-0 away to a struggling Netherlands side stuck on 10 points in third.

The Czechs dominated much of the possession but had trouble breaking down a determined Kazakh defence.

Yuri Logvinenko had put the visitors ahead in the 21st minute when he outjumped his marker and gave a sprawling Petr Cech no chance.

The home side finally levelled in the 72nd when Borek Dockal lofted a cross that substitute Skoda headed home for his first international goal.

Skoda then added his second in the 86th minute when he rose to head a Josef Sural cross into the net.

Israel crushed Andorra 4-0 in Euro 2016 qualifying Group B in Haifa on Thursday to maintain their hopes of at least a playoff place for a chance to reach the finals in France next year.

All the goals came in the first half and began with a third minute close-range strike by Maccabi Tel Aviv ace Eran Zahavi.

Nir Biton added the second with a glancing header in the 22nd and Tomer Hemed with a penalty (26) plus a goal by striker Munas Dabbur (38) after a slalom run wrapped up the win.

Israel are in third place, which brings a playoff spot, on 12 points from seven games behind group leaders Wales, who have 17 after beating Cyprus 1-0 away, and Belgium with 14 after their 3-1 home win over Bosnia.

Cyprus have nine points and Bosnia eight with Andorra bottom without a goal or a point.

Israel laid siege to the Andorra goal for the entire second half but failed to add to the score.

Their next fixture is away to group leaders Wales, who won 1-0 in Cyprus, on Sunday where a win for the hosts will ensure they qualify for the finals.

© Copyright 2021 Reuters Limited. All rights reserved. Republication or redistribution of Reuters content, including by framing or similar means, is expressly prohibited without the prior written consent of Reuters. Reuters shall not be liable for any errors or delays in the content, or for any actions taken in reliance thereon.
Related News: Wales, Kevin De Bruyne, Gareth Bale, Andorra, Reuters
SHARE THIS STORYCOMMENT
Print this article