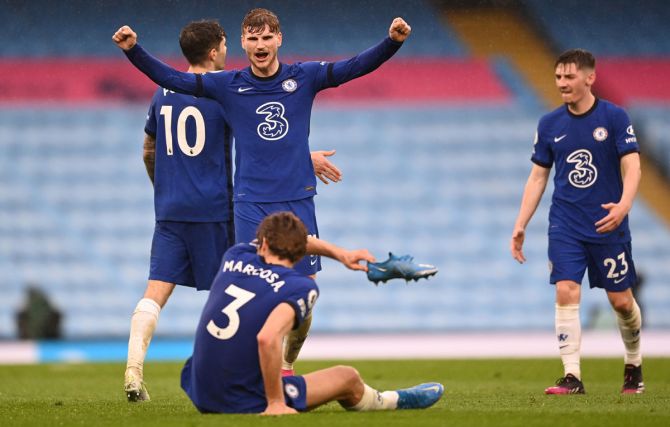 Manchester City will have to wait a little longer to be crowned Premier League champions after they were beaten 2-1 at home by Chelsea on Saturday.

City, who made nine changes for the game, could still secure the title this weekend if second-placed Manchester United lose at Aston Villa on Sunday.

With three games left to play Pep Guardiola' side are 13 points ahead of United, who have five games remaining.

United have three games coming up in five days, and even if they win all three City would win the title by beating Newcastle on Friday.

Saturday's game also offered something of a preview of the Champions League final between the two sides, although both Guardiola and Thomas Tuchel left out key players. 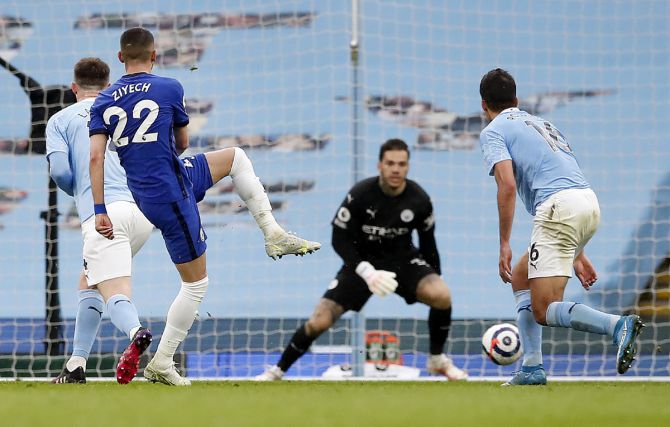 Raheem Sterling put City ahead in the 44th minute, sneaking in front of Sergio Aguero to connect with a low ball from Gabriel Jesus, who had bustled past Andreas Christensen.

Within two minutes they had a chance to double that lead from the penalty spot, but Aguero's soft chip down the middle ended in embarassment as it was easily saved by Edouard Mendy.

Chelsea drew level through a low drive from Hakim Ziyech in the 63rd minute, and then had efforts from Timo Werner and Callum Hudson-Odoi ruled out for offside.

City felt they should have had another penalty when Sterling went down in the box with Kurt Zouma behind him.

But Tuchel's team went on to grab a late winner through with Marcos Alonso's scuffed shot floating past Ederson.

Chelsea beat City in the semi-final of the FA Cup on April 17 and will face them again in May 29th's Champions League final. 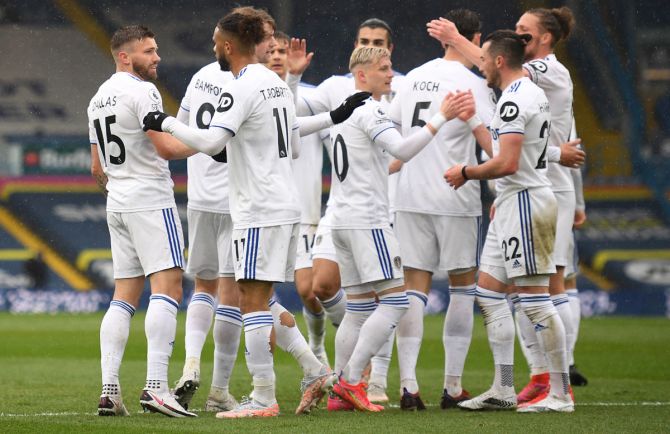 Tottenham Hotspur's slim hopes of finishing in the Premier League top four faded as goals from Stuart Dallas, Patrick Bamford and Rodrigo condemned them to a 3-1 defeat at Leeds United in a lively game on Saturday.

Spurs stayed sixth on 56 points from 35 games, while Leeds moved two places up to ninth on 50 points.

Tottenham's interim coach Ryan Mason, who suffered his first league defeat since taking over from Jose Mourinho last month, rued Harry Kane's goal being ruled out after a VAR check when the score was 1-1.

"I get it if it is an inch offside," Mason told the BBC.

"It is a tight decision but in my opinion it is not offside. You don't understand the momentum shift that can have in football. It is a totally different mindset at 2-1." 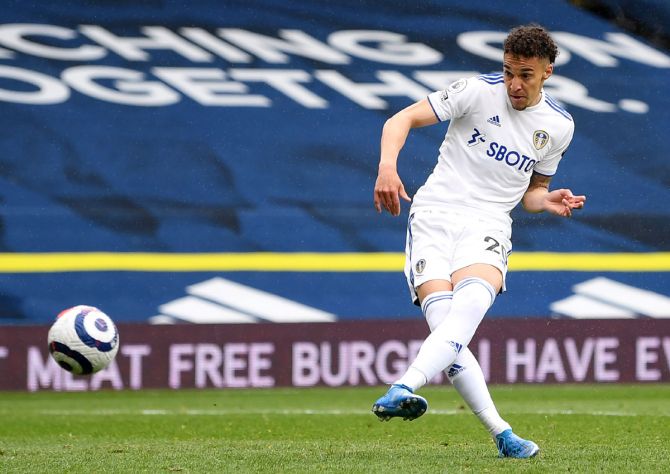 Leeds dominated the first half and Dallas fired them into a 13th-minute lead when he swept a close-range rebound into the roof of the net after Spurs goalkeeper Hugo Lloris could only parry a mis-hit clearance by Sergio Reguilon.

Son Heung-min levelled in the 25th with a classy finish after Dele Alli put him through with a defence-splitting pass but Leeds were unfazed and Bamford restored their lead shortly before halftime.

Kane had another goal scrapped for offside after the break and shaved the crossbar with a free kick as the visitors threw men forward before they were punished by a swift Leeds counter.

Raphinha raced down the left flank and squared a perfect pass across the penalty area to fellow substitute Rodrigo, who gave Lloris no chance with a clinical first-time shot in the 84th minute.

"The last few games for some reason we have been good at the back but not created many chances," Bamford told BT Sport. "It is not good for me, but today we got the balance right." 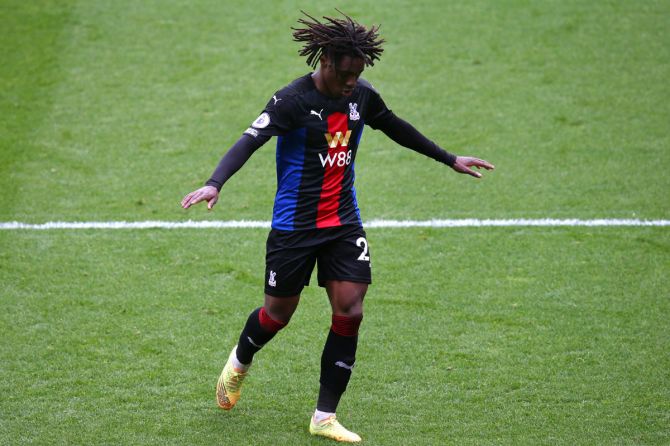 Deflected goals from Christian Benteke and Eberechi Eze gave Crystal Palace a 2-0 win at relegated Sheffield United on Saturday, snapping a run of three league defeats for the London club and guaranteeing their top-flight status next season.

The visitors took the lead in the second minute when Eze carved the Blades open with a mazy run and slid the ball to Benteke, whose effort bounced off George Baldock and dribbled over the line.

Wilfried Zaha had an effort from close range blocked before Benteke was denied a second when his powerful header was only just kept out by United goalkeeper Aaron Ramsdale.

A half-time team talk from interim manager Paul Heckingbottom momentarily sparked the Blades into life, but John Egan squandered an opportunity to draw his side level when his effort from the edge of the penalty area sailed over the bar.

Benteke came within inches of doubling Palace's lead after robbing John Fleck of possession, but his powerful strike cannoned off the post before Andros Townsend saw his effort curl wide.

Palace continued to pepper the United goal and were finally rewarded in the 88th when Eze, a thorn in the hosts' side, slid past several challenges and fired a goal-bound effort that took a massive deflection off Fleck and wrongfooted Ramsdale.

The Blades, who have netted a league-low 18 goals all season, lacked fluency going forward and failed to record a single shot on target as they slumped to their 28th defeat of the season.

The result lifted Hodgson's side to 13th on 41 points, 14 points clear of the relegation zone with four games to play. The Blades remain in last place on 17 points.

© Copyright 2021 Reuters Limited. All rights reserved. Republication or redistribution of Reuters content, including by framing or similar means, is expressly prohibited without the prior written consent of Reuters. Reuters shall not be liable for any errors or delays in the content, or for any actions taken in reliance thereon.
Related News: Chelsea, Manchester City, Leeds United, Rodrigo, Tottenham Hotspur
SHARE THIS STORYCOMMENT
Print this article 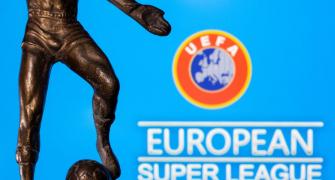 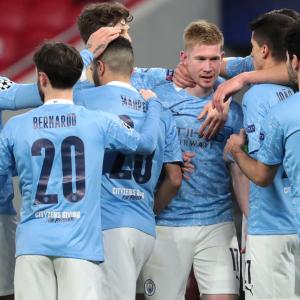 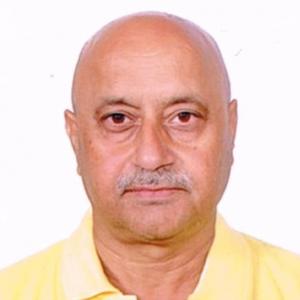