IMAGES from the English Premier League match played between Arsenal and Chelsea at Emirates Stadium in London on Sunday. 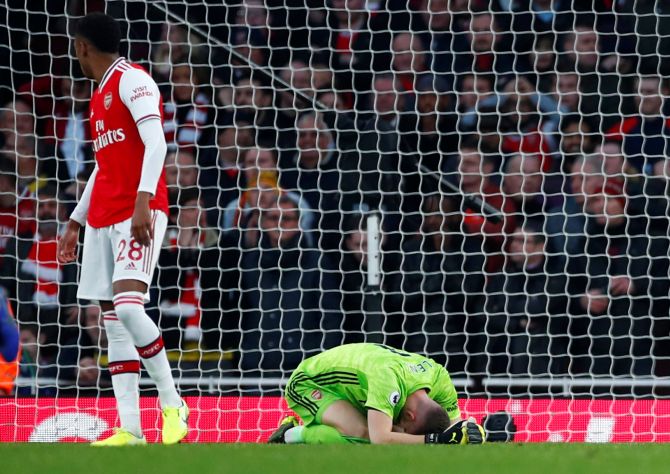 Chelsea produced a stunning late comeback to beat Arsenal 2-1 in the Premier League on Sunday, consigning Mikel Arteta to defeat on his home debut as coach of the north London side.

Pierre-Emerick Aubameyang gave the hosts the lead in the 13th minute but Arsenal goalkeeper Bernd Leno's howler handed Jorginho an equaliser on a plate after 83 minutes.

Four minutes later, Tammy Abraham settled a bad-tempered London derby when he turned in the box and drilled through the hapless Leno's legs.

Arsenal, 12th, started with great intensity, forcing Frank Lampard's tired-looking Chelsea back, until Aubameyang broke the deadlock after 13 minutes with an acrobatic header. 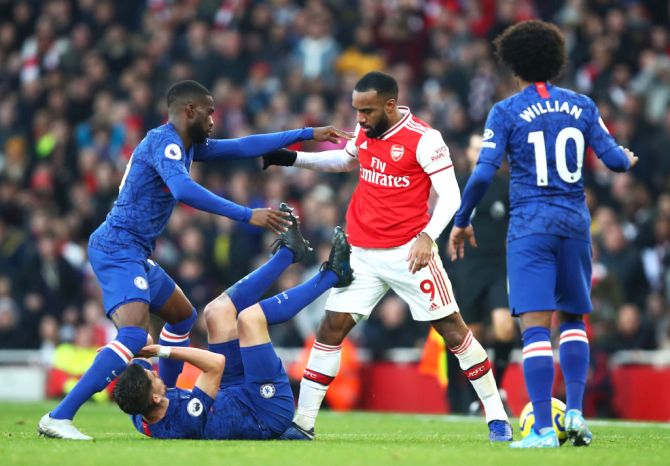 IMAGE: Arsenal's Alexandre Lacazette is restrained by a Chelsea player as he clashes with Chelsea's Jorginho. Photograph: Julian Finney/Getty Images

Lampard brought on Jorginho after 34 minutes and changed from a 3-4-3 formation to 4-3-3, as he did on Boxing Day against Southampton, and it helped the visitors find a foothold at a fired-up Emirates Stadium.

Fourth-place Chelsea, who lost five of their previous seven league games, had the better of the second half and when Leno blundered they quickly turned the screw to leave Arteta still hunting for his first win, following a draw at Bournemouth.

After Aubameyang's opener, Alexandre Lacazette came close to adding a second but N'Golo Kante made a vital interception in front of goal.

The hosts showed more spark than in recent weeks but could not capitalise and Jorginho's presence helped Chelsea turn the game around after the break. 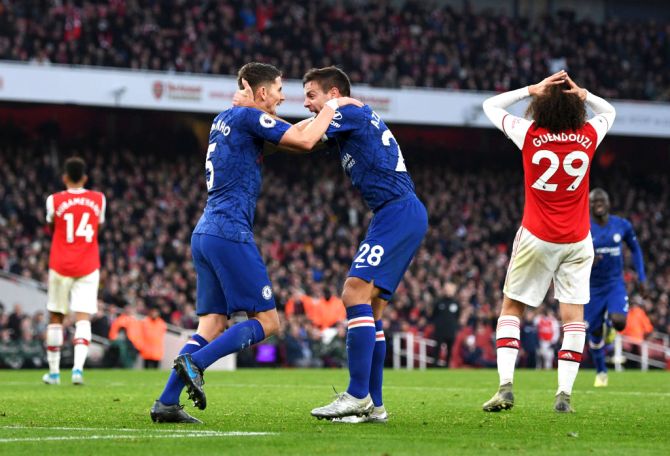 "I give credit to the boys, credit to Jorginho," said Chelsea striker Abraham.

"In the first 30 minutes they dominated the ball... then this man (Jorginho) comes on and it's a whole different ball game. Him coming on lifted us as a team."

Abraham saw one effort blocked and another saved by Leno in the second half, while Arsenal substitute Joe Willock fired narrowly wide.

Then with the clock ticking down Leno missed his punch as he tried to reach Mason Mount's free kick, allowing Jorginho a simple tap-in at the far post.

Abraham and Willian broke at lightning pace and combined for the English striker to net the second against a shell-shocked Arsenal, his 12th league goal of the campaign.

© Copyright 2020 Reuters Limited. All rights reserved. Republication or redistribution of Reuters content, including by framing or similar means, is expressly prohibited without the prior written consent of Reuters. Reuters shall not be liable for any errors or delays in the content, or for any actions taken in reliance thereon.
Related News: Chelsea, Jorginho, Arsenal, Tammy Abraham, Bernd Leno
SHARE THIS STORYCOMMENT
Print this article 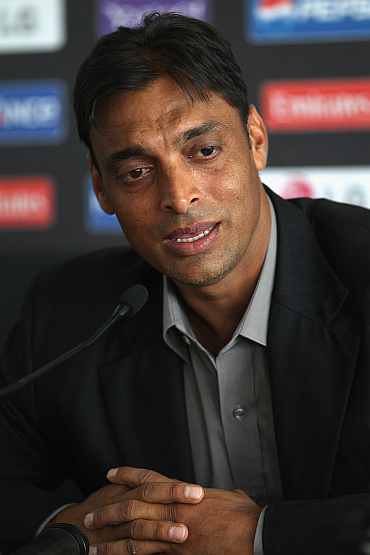 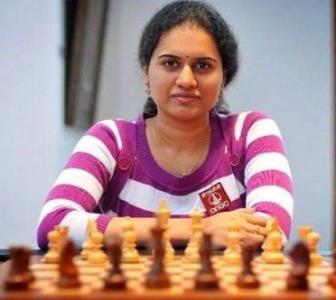 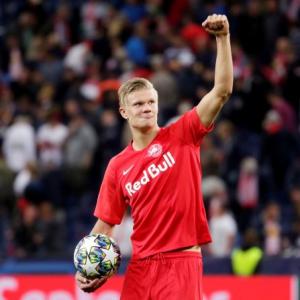 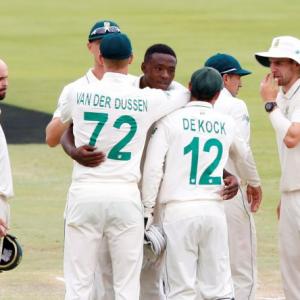