Man United on top after draw at Birmingham

Manchester United extended their unbeaten Premier League run to 18 games and regained top spot on Tuesday but there were no celebrations after they gave away another late goal in a 1-1 draw at Birmingham City.

United looked on course to leapfrog them with a two-point cushion after Dimitar Berbatov scored in the 58th minute but Lee Bowyer levelled a minute from time to leave the visitors with seven draws and one win from their eight away games.

The draw took them to 38 points from 18 games, ahead on goal difference of Manchester City, who have played 20. Arsenal, in action at Wigan Athletic on Wednesday, have 35 from 18 with Tottenham Hotspur fourth on 33 after beating Newcastle United 2-0.

Champions Chelsea, who have taken just six points from the last 24 having lost to Arsenal on Monday, slip to fifth on 31. They are also in action on Wednesday against Wigan Athletic.

United had the chance to pull nine points clear of Chelsea but were cautious in their approach at Birmingham, who started the game in the bottom three.

Alex McLeish's team, beaten at home only once and victorious over Chelsea last month, also seemed content to play it safe until Berbatov opened them up with a neat backheel then finished the move with a low, drilled shot for his 15th goal of the season.

Having conceded late goals in draws at Fulham and Everton earlier in the campaign, the visitors looked nervous as Birmingham finally pushed bodies forward and levelled with a goal that United claimed had been set up with a foul and a handball by giant substitute Nikola Zigic.

"I think it's terribly harsh, we outplayed them second half and we didn't deserve that," Ferguson told Sky Sports.

"Handball and foul for their goal and if the referee can't see that what chance have you got?"

There were no such problems for City, who were totally in control against a poor Villa side.

Balotelli was brought down after eight minutes and scored the penalty, with Joleon Lescott heading the second five minutes later.

Balotelli tapped in the 27th-minute third after the impressive David Silva had a shot parried and the striker showed some uncustomary enthusiasm to snatch up the ball before returning to type with a casually-converted penalty early in the second half.

"He is not a complicated guy, he is a good guy, he likes to look serious but he isn't," Mancini said of Balotelli, rumoured to be unsettled after his summer arrival from Inter Milan.

"Today I think we took a step forward, he smiled after the first goal, for the first time, and I hope it will continue."

Spurs struggled to break down Newcastle until Aaron Lennon struck after 57 minutes but the Londoners were reduced to 10 men when Younes Kabul was sent off for a butt eight minutes later.

However, just as in their Boxing Day win at Villa Park, Spurs still went for it and got their reward when Gareth Bale scored their second nine minutes from time with another trademark run and low shot.

© Copyright 2022 Reuters Limited. All rights reserved. Republication or redistribution of Reuters content, including by framing or similar means, is expressly prohibited without the prior written consent of Reuters. Reuters shall not be liable for any errors or delays in the content, or for any actions taken in reliance thereon.
Related News: Mario Balotelli, Chelsea, Manchester United, Dimitar Berbatov, Birmingham City
COMMENT
Print this article 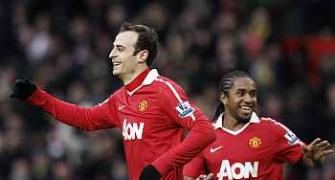 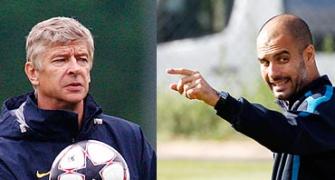 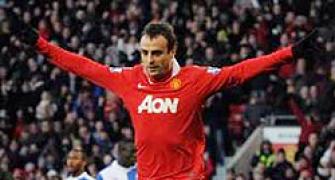 Berbatov urges scribes to stop voting for him

Scholes ruled out of Man United's trip to Chelsea