Hull City and Swansea City earned valuable victories in their battle for Premier League survival but Middlesbrough slid further towards the drop after a 4-0 hammering at Bournemouth on Saturday.

Hull's 2-0 win over Stoke City and Swansea's identical scoreline against Watford increased the pressure on Crystal Palace and Burnley, who are hovering above the relegation zone and play Liverpool and Manchester United respectively on Sunday.

With four games remaining 17th-placed Hull are just a place above the drop zone with 33 points to the 31 of Swansea. Boro are in 19th spot on 24 points and Sunderland are bottom on 21.

Hull had a tough task after Oumar Niasse was surprisingly shown a straight red card after 25 minutes for a challenge on M'Baye Niang.

down on the goal line. 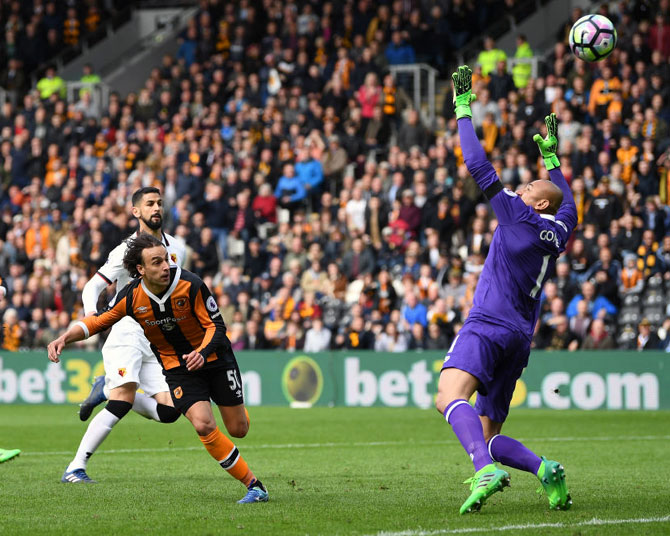 Hull made sure of the points nine minutes later when Sam Clucas found the top corner with superb 30-metre shot. They have now won four consecutive home league games.

Spanish striker Fernando Llorente gave Swansea the lead with a trademark header from a corner in the 10th minute and the Welsh side were given a break when Marko Arnautovic missed a second-half penalty.

Swansea made sure of the win when Tom Carroll's shot found the top corner via a deflection off Joe Allen.

Time is running out for Boro who have not won in 16 league games and they endured a nightmare opening 20 minutes in which they conceded two goals and had midfielder Gaston Ramirez sent off for a second booking.

Josh King scored just 96 seconds into the match and Benik Afobe doubled the advantage for the Cherries.

Winger Marc Push made it 3-0 and Charlie Daniels completed the rout.