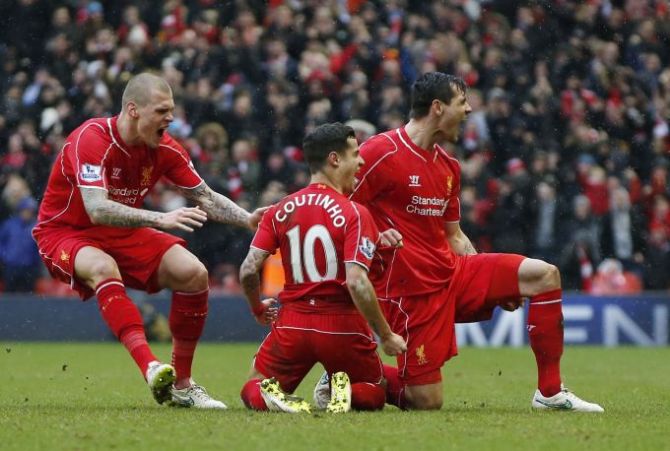 Liverpool's Philippe Coutinho celebrates with Dejan Lovren and Martin Skrtel after scoring the second goal for his side against Manchester City. Photograph: Phil Noble/Reuters

Liverpool's Philippe Coutinho produced a moment of Brazilian magic to dent Manchester City's Premier League title aspirations in a 2-1 home win on Sunday as Arsenal moved up to third with a 2-0 victory against Everton.

Coutinho found the corner with a stunning curling effort to extend Liverpool's unbeaten run to 11 league games after Henderson's excellent first-half strike had been cancelled out by City's Edin Dzeko.

It was a serious blow to City manager Manuel Pellegrini and his second-placed team's hopes of retaining their title as they missed the chance to close the five-point gap on leaders Chelsea, who play Tottenham Hotspur in the League Cup final later on Sunday. Tomas Rosicky of Arsenal (second from left) celebrates with team mates as he scores their second goal during the Premier League match against Everton at Emirates Stadium. Photograph: Ian Walton/Getty Images

Arsenal got over Wednesday's 3-1 home defeat by AS Monaco in the Champions League when France striker Olivier Giroud, who missed a glut of chances in that loss, swept in a corner after 39 minutes in a tight game against Everton at the Emirates Stadium.

Substitute Tomas Rosicky added a late second with a long- range strike to make sure of the win for the north London side. 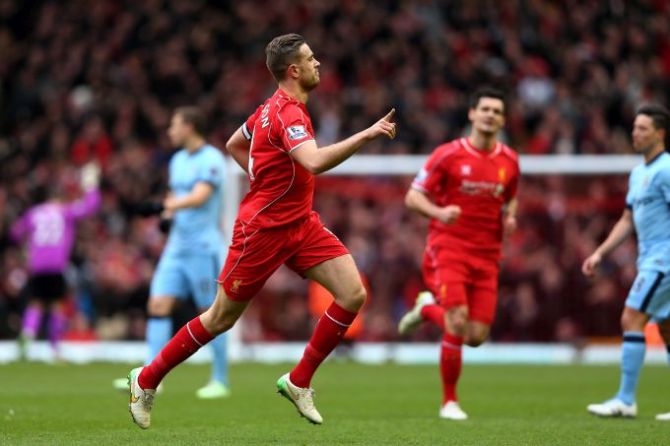 Liverpool manager Brendan Rodgers had expressed concerns over the fitness of his team ahead of City's visit after they had just two days to recover from a penalty shootout loss at Besiktas in a Europa League last-32 tie on Thursday.

Yet they showed no ill-effects from that match when Henderson, who passed a late fitness test, bent an excellent effort from 20 metres into the top corner to give the hosts the lead after 11 minutes, shortly after Adam Lallana had a goal ruled out for offside.

City equalised when Dzeko slotted the ball past Simon Mignolet after Sergio Aguero and David Silva had combined well to create the chance. Lallana saw another goal chalked off nine minutes after the interval when he was again flagged for offside after he tapped in Martin Skrtel's headed knockdown from close range.

As both teams appeared to be tiring after an open and attacking match, Brazil's Coutinho found the breakthrough with a brilliant goal, curling the ball beyond a despairing dive from Joe Hart with 15 minutes remaining.

"I have to take my hat off to the players," Rodgers told Sky Sports. "To get back at half four in the early hours of Friday morning -- by the time they got to bed it was six, and they had to sleep all of Friday.

"We then did some light work yesterday, but to come out and play like they did -- they were relentless."

For City, who last week had gained two points on Chelsea as the leaders drew, it was another step backwards and a further disappointment after Tuesday's 2-1 Champions League home defeat against Barcelona. Olivier Giroud of Arsenal celebrates as he scores their first goal during the Premier League match against Everton at Emirates Stadium. Photograph: Paul Gilham/Getty Images

Arsenal had to contend with their own misery in Europe but they set about 14th-placed Everton in the mood to atone for their mistakes.

Many had questioned Giroud's finishing after a dismal display against Monaco but the Frenchman had no problems putting 14th-placed Everton to the sword.

The visitors, who at times looked jaded after their 3-1 home win against Young Boys in the Europa League on Thursday, threatened occasionally through Belgian striker Romelu Lukaku but Rosicky's goal quelled their hopes of a late equaliser.

"You could see we suffered on Wednesday night against Monaco and that was still in our mind but we were patient, that got us a good chance and we got a good win today," Wenger told the BBC.

© Copyright 2021 Reuters Limited. All rights reserved. Republication or redistribution of Reuters content, including by framing or similar means, is expressly prohibited without the prior written consent of Reuters. Reuters shall not be liable for any errors or delays in the content, or for any actions taken in reliance thereon.
Related News: Manchester City, Liverpool, Jordan Henderson, Edin Dzeko, Philippe Coutinho
SHARE THIS STORYCOMMENT
Print this article