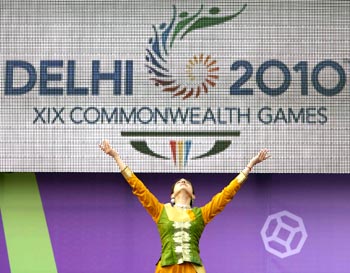 Starting the 100-day countdown to this year's Commonwealth Games, the Queen's Baton Relay arrived in India from Pakistan through the historic Wagah Border in Amristar, on Friday.

The QBR, which was launched by Queen Elizabeth at the Buckingham Palace in London on October 29 last year in the presence of Indian President Pratibha Patil, will now start a 100-day national tour which would culminate in New Delhi for the Games from October 3 to 14.

With this, the baton is nearing the end of its 190,000-km journey, covering 71 nations and territories across the world.

"It's a great day for sports in India. The baton has gone 170,000 kms all around the Commonwealth. We have received it in a very big manner," Kalmadi said after passing the baton to a host of dignitaries including CGF CEO Mike Hooper and Olympic bronze medallist boxer Vijender Singh.

"It's a big day for India and Pakistan. It is because of Pakistan's efforts that India got the Games and it shows that our relationship with Pakistan will improve if we concentrate on the sporting angle," he added.

Among those to whom the baton was passed on being received at around 0930 hrs IST at the border, were four-time world champion woman boxer M C Mary Kom.

Kalmadi once again allayed fears about the delay in infrastructure construction that have marred the build-up to the Games.

"I am grateful to Mr Fennell and Mr Hooper, who have been supporting us. This also happens to be 100 days before the Games. Let me tell you that everything is in place, including the infrastructure. Everything is on track," he said.

POA chief Hassan said the Games would help in getting rid of the hostilities between India and Pakistan.

"It's a historic moment for us. It would get rid of the hostilities of the past," he said.

Among others who were present at the relay included Punjab Chief Minister Prakash Singh Badal, Delhi Chief Minister Sheila Dikshit and a host of top politicians and bureaucrats.