IMAGE: Life-size cardboard figures with the photos of football fans are positioned on the stands of the Borussia Moenchengladbach soccer stadium in Moenchengladbach, on Wednesday. The Bundesliga will be the first major European league to resume when it gets going following a two-month break due to the coronavirus pandemic. Photograph: Thilo Schmuelgen/Reuters

Bundesliga teams will be allowed up to five substitutions per match when it restarts on Saturday after the coronavirus stoppage, while teams will be relegated provided the season is completed, the German Football League (DFL) said on Thursday.

Short-term venue changes will also be permitted if health reasons dictate such a need and the season will continue beyond its re-scheduled finish date of June 30 and into July if necessary, the DFL said following a general assembly.

The Bundesliga will be the first major European league to resume when it gets going following a two-month break due to the coronavirus pandemic. The second tier 2 Bundesliga will also get under way.

All matches will be played behind closed doors, and progress will be closely watched around Europe.

However, when three players at Cologne tested positive, only the players affected were isolated. Under German law, the final decision in such cases lies with local health authorities.

Soccer's rule-making body IFAB ruled earlier this month that teams could make five substitutions instead of the usual three as a temporary measure but said the final decision lay with competition organisers.

The DFL became the first major league to implement the change which is designed to help teams cope with fixture congestion as they rush to complete the season.

The DFL said that all but one of its 36 member clubs voted in favour of maintaining relegation.

"(The assembly) unanimously confirmed, with one abstention, the intention to carry out the current 2019/20 season in its entirety, including relegation, as far as legally possible and, if necessary, to continue beyond 30 June in July," it said.

No decision was taken on what would happen if the season had to be called off for health reasons.

"In the event that... the season has to be abandoned prematurely, a regulation regarding the sporting classification is to be developed within the following two weeks," it said.

Venues could be changed should a local outbreak make it inadvisable to stage a match. "There will be the possibility of a match being played in another stadium at short notice for overriding compelling legal, organisational and/or security reasons," the DFL said.

Bayern Munich, chasing an eighth successive title, currently lead the table with 55 points from 25 games, four ahead of Borussia Dortmund with RB Leipzig third on 50. There are nine rounds of matches to play.

At the bottom, Werder Bremen and Paderborn are in the drop zone with Fortuna Duesseldorf in 16th, which is the relegation/promotion play-off spot.

© Copyright 2020 Reuters Limited. All rights reserved. Republication or redistribution of Reuters content, including by framing or similar means, is expressly prohibited without the prior written consent of Reuters. Reuters shall not be liable for any errors or delays in the content, or for any actions taken in reliance thereon.
Related News: DFL, IFAB, Werder Bremen, Borussia Moenchengladbach, Bayern Munich
SHARE THIS STORYCOMMENT
Print this article 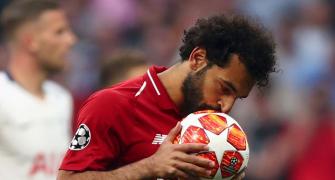 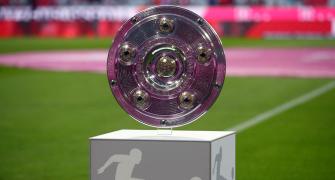 'Returning to training felt like being a child again'