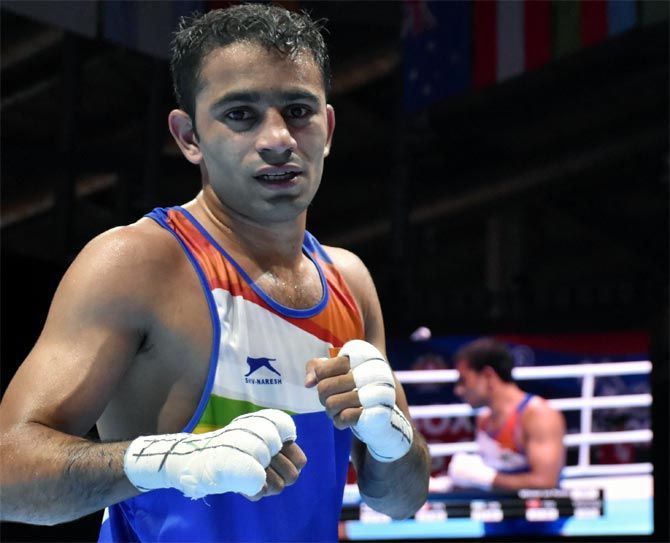 IMAGE: Amit Panghal defeated the Philippines's Carlo Paalam 4-1 to make sure of at least a bronze medal at the AIBA men's World Boxing Championships.

India were assured of an unprecedented two medals at the AIBA men's World Boxing Championships after Amit Panghal (52kg) and Manish Kaushik (63kg) entered the semi-finals with impressive victories, in Ekaterinburg, Russia, on Wednesday.

Both boxers sealed their maiden medals at the World Championships.

India had never won more than one bronze medal in a single edition of the World Championships. The overall medal count for the country was four bronze medals, was Vijender Singh (2009), Vikas Krishan (2011), Shiva Thapa (2015) and Gaurav Bidhuri (2017).

The second-seeded Panghal, who had earlier defeated Paalam in the Asian Games semi-finals last year, wasn't off to the best of starts and trailed Paalam at the end of the opening round.

But the Armyman from Rohtak did not take long to get his act together and become the more aggressive in the next two rounds.

"I started slow but I think I dominated the second and third round. I was told by my coaches to be aggressive and I tried to be that. I had fought against him earlier so that gave me a fair idea of his game plan as well," Panghal said after the bout.

In the last-four stage, the Haryana-pugilist will be up against Kazakhstan's Saken Bibossinov, who stunned Armenia's European gold medalist and sixth seed Artur Hovhannisyan in his quarter-final.

"He is a southpaw and has a long reach, I will work out a strategy for him," the 23-year-old Panghal said.

The Indian was beaten in the quarter-finals in the last edition of the World Championships after a fiercely-contested bout to then defending champion Hasanboy Dusmatov in the 49kg category.

Kaushik, a former National champion making his debut at the world event, was the next to take the ring and produced a composed performance against a flamboyant opponent, who paid the price for a very poor defence.

The Indian was sharp with his counter-attacks and not for once seemed fazed by his opponent's attempts at trying to draw him in with a low guard.

Cruz was the light welterweight (64kg) category gold-medallist in the 2017 edition and is also a two-time Pan American Games gold-winner.

Sanjeet, also making his debut at the event, did come up a spirited show against Torres but the Ecuadorian put more power in his punches and displayed sharp reflexes in avoiding the Indian's counter-hits to prevail in a thoroughly entertaining contest.

In the last Indian bout of the day, Asian silver-winner Kavinder Singh Bisht (57kg) was up against fourth-seeded Englishman McGrail, a former gold medalist at the European Championships. The boxer from Uttarakhand fought with a deep gash above his right eye but wasn't perturbed.

However, McGrail was just too good for him with a deadly left hand, which regularly struck scoring uppercuts.

It was Bisht's second successive World Championships appearance; he finished a quarter-finalist even the last time around. 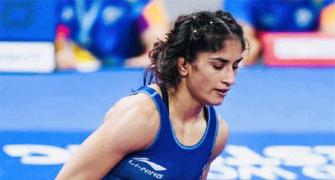 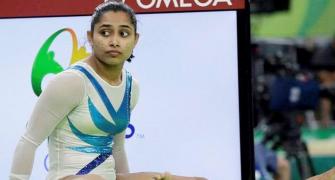 Dipa is down but not out, insists coach 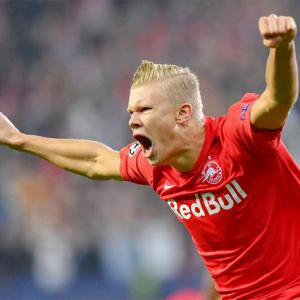