Olympic double silver medallist Yohan Blake completed the sprint double at the Jamaican Championships when he easily won the men's 200 metres on Sunday.

In the absence of the injured Usain Bolt, Blake covered the field by the 120-metre mark, before pulling away to win in 20.29 seconds, his best time since finishing second to Bolt at the London 2012 Olympics in 19.44 seconds.

"I know I was working really hard in training and I just needed to get the race out of the way early, so I just relaxed and took it home, given that the wind was against me," Blake, who claimed the 100m in 9.95 seconds on Friday, told Reuters.

"As you can see I'm very consistent last night in the semi and today is the same time, so I'm good," added the second fastest man in the history of the half lap event with his time of 19.26.

He said he definitely plans to run the sprint double at the Rio Olympics next month.

Behind Blake, Nickel Ashmeade and Julian Forte finished in second and third respectively, leaving Forte's Olympic hopes hanging in the balance. The Jamaica Athletics selection committee is set to meet on Thursday to pick the team and decide if defending Olympic champion Bolt, who has a medical exemption, replaces Forte in the 200m.

Bolt pulled out of the championships on Friday, citing a minor hamstring tear.

In the women's 200m final on Sunday, Simone Facey won in 22.65, ahead of two-time Olympic champion Veronica Campbell-Brown, 22.86.

In the women's 100m hurdles, world champion Danielle Williams crashed out at hurdle six, after being in a close race with eventual winner Megan Simmons, who clocked a career best 12.79. Commonwealth Games champion Stephenie-Ann McPherson returned the sixth fastest time this year, 50.04 to win the 400m, while Javon Francis won the men's 400m in 44.95secs.

© Copyright 2021 Reuters Limited. All rights reserved. Republication or redistribution of Reuters content, including by framing or similar means, is expressly prohibited without the prior written consent of Reuters. Reuters shall not be liable for any errors or delays in the content, or for any actions taken in reliance thereon.
Related News: Yohan Blake, Julian Forte, Bolt, Reuters, Stephenie-Ann McPherson
SHARE THIS STORYCOMMENT
Print this article 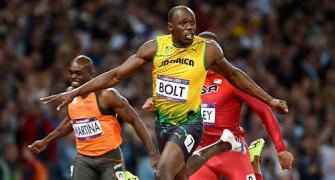 My records are not meant to be broken, declares Bolt in Bangalore 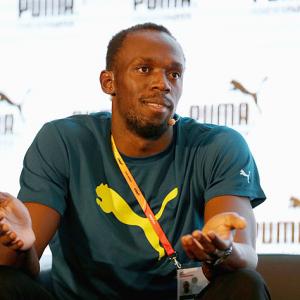