News
Business
Movies
Sports
Cricket
Get Ahead
Money Tips
Shopping
Sign in  |  Create a Rediffmail account
Rediff.com  » Sports » Bindra on how India can emerge as a sporting nation

Bindra on how India can emerge as a sporting nation

The Indian shooters fired a blank at the Rio 2016 Olympics with Abhinav Bindra missing the medal by a whisker but the 2008 Beijing Olympic champion said he has high hopes for Tokyo. 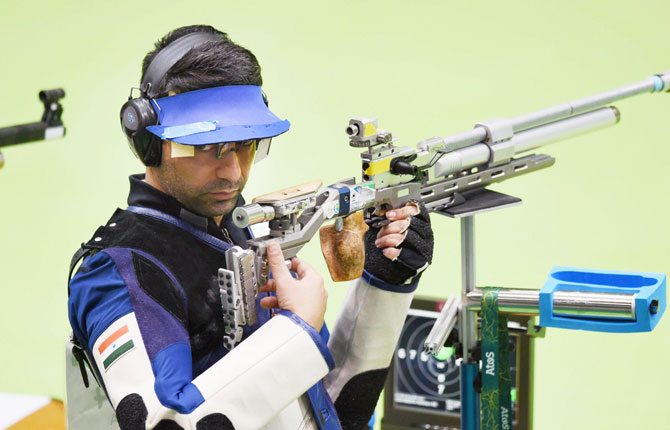 Celebrated Indian shooter Abhinav Bindra says everything needs to evolve around 'sports science' if India has to enjoy success at the highest level and emerge as a sporting nation.

Bindra, who won the gold medal at the Beijing Olympic Games in 2008, said miracle don't happen in a short period and sustained efforts in the right direction are required to produce better results.

Bindra, India's only individual Olympic champion till date, asserted that results should not be the sole criteria to identify talent and if needed western methods must be followed for the purpose.

"Unearthing talents has to be a scientific process. You can't just look at results as the parameters of success at the a young age. I was hopeless as a 12-year-old but I went on to win a gold medal in Olympics. You have to go about in a scientific way to identify talents," Bindra said.

"Western countries do with a lot of scientific testing -- of the kid's gene, body structure, what sport would he be best suited for. We need to bring those systems into our country. Everything has to evolve around sports science and medicine. If you want high level of success those are factors that cannot be ignored," he added.

"I see a significant change in attitudes, in recognition and support for athletic journeys, a commitment to better governance, high class infrastructure and knowledge. It is now for us to bring this all together and I genuinely believe that each one of us has a role to play," the chairman of the Target Olympic Podium committee said.

Further emphasising the role of technology for improvements in an athlete, Bindra cited the example of use of TecnoBody.

"With Tecnobody I found a machine which tells me the same about my body. I had built the skill to tell if my rifle is imbalanced by a gram. When I stood on the round metal plate on Tecnobody's stability device, a string of sensors measured the minute oscillations in my body. It told me where my centre of gravity was and which way my body was leaning. It helped me fine-tune my stability with real-time feedback."

Bindra also recalled how a misalignment of the upper and lower sides of one's jaw contributes to bio-mechanical errors.

"I visited a dentist, who X-rayed my jaw and made a splint for me to wear while sleeping and training. A sort of plastic denture. The result was incredible.

"When I wore the splint the range of motion in my neck improved by 15-20 degrees and this helped me perfect my alignment. I wouldn’t have believed this until I experienced it. You could call my story one of ‘high performance’. That is a term used quite liberally in elite sport," Bindra said.

"Athens 2004 was a wake-up call. In perhaps the most defining incident of my career I came a disappointing seventh in the Olympic final after shooting what I thought was the perfect game. Only much later did I find out that the lane position I was allotted had a loose tile underfoot.

"Months later, I had two obvious choices – one, quit the sport or, two, carry on and accept the incident as ‘bad luck’. I chose a third and it defined me. I chose the quest for adaptability -- to try and be perfect on the imperfect day.

"It worked for me and came to my rescue even at Rio when my carefully-chosen sight broke minutes before my event. I was able to remain composed and made it to fourth," he said.

The high-profile Indian shooters fired a blank at the Rio 2016 Olympics with Bindra missing the medal by a whisker but the 2008 Beijing Olympic champion said he has high hopes for Tokyo.

"I don't think we missed the bus for Tokyo. I have a lot of belief in my athletes for Tokyo. I'm an athlete and I'm conditioned to hope, and I'm hopeful. But obviously, but if you are looking at larger picture, and make changes that go down to grassroots level it's going to take time and not overnight.

"We can't really make many changes for Tokyo. We have a system in place and a lot of things in place, it's a question of implementing. It takes time to streamline. You can't really change anything but implement."

A member of the Sports Ministry's task-force Bindra said they need to start planning for future.

"But if you think to change something miraculously overnight for 2020, that too in our country, it may be a little too optimistic. Larger change can happen in long term.

"We need to start the ball rolling now. In 2020 we have to make best use of what we have, perhaps to try to implement things better, but beyond that we can hope to bring in larger systematic changes which will take time to develop. That work needs to start now."