Pan-American champions Argentina defeated Poland 5-1 to set up a Champions Challenge semi-final with Belgium, who outplayed Canada 4-0 in the quarter-finals on Thursday.

Argentina, at world No. 8 the highest-ranked team in the tournament, and Belgium have both already secured direct entry to the 2012 Olympic Games.

Argentina had clinched the lone spot available at the Pan-American competition while Belgium qualified as one of Europe's three teams when they advanced to the semi-finals of the European Cup.

Britain, as hosts of the London Olympics, have an automatic spot in the in the Games' line-up.

Poland surprised Argentina by taking the initial lead in the fourth minute through a field goal by Bartosz Zywicka but the Argentines asserted their authority with three goals in the space of 10 minutes to surge 3-1 ahead at half-time.

In the second half, Argentina's relaxed play allowed Poland some leeway into their circle, but did not concede another goal. At the other end Lucas Rafael Rossi (56th minute) and Lucas Martin Vila (68th minute) made field strikes to round off Argentina's scoring.

Belgium, who were pushed to second spot in Pool A due to India's superior goal difference despite finishing level on points, packed too much fire for Canada after opening the scoring in the 23rd minute through a penalty-corner conversion by Florent van Aubel.

Restricted to one goal in the first session, Belgium hammered three after half-time with flash field goals by Thomas Briels in the 49th minute and tournament's top-scorer Tom Boon in the 59th.

The other goal came through a penalty stroke conversion by Jerome Dekeyer in the 52nd minute.

Canada and Poland, both now pushed to minor placing playoffs, feature in the same Olympic Qualifier as India, to be staged in New Delhi in February. 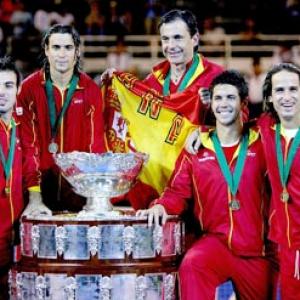