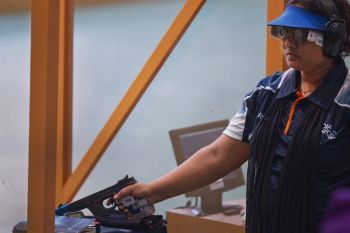 World cup gold medallist Heena Sidhu was in third position in the precision round of 25 meter women pistol event, which was topped by Commonwealth Games gold medallist Anisa Sayyed at the 57th National Shooting Championship in New Delhi on Monday.

Ahead of the finals on Tuesday, Sayyed of Haryana was leading with a good score of 289 points, followed by Sonia Rai (287) of Himachal pradesh, while Heena of Punjab was third with a score of 286.

Rahi Sarnobat of Maharashtra and Anita Devi of Haryana shot identical scores of 286 to be in the fourth position at the Karni singh shooting Ranges, Organising Secretary.

Shreya Gawande of Maharashtra was on top of the 25m Pistol Junior event with 285 points, while Haryana's Gauri Sheoran (283) is in second place, followed by Chinki Yadav (282) of Madhya pradesh.

In Air pistol men's 10 meter range event, Praveen Kumar of Haryana was leading with 579 points, while Kapil Kumar of Air Force was behind him with 578 score, followed by Army's Jitu Rai and Neeraj Kumar with same score of 577 points.

In the junior men category of 10m Air pistol event, Kapil Kumar of Air Force was on the first position with 578 points, Army's Arun was on second place with 571 and Karan Pratap Singh of Punjab was third with the same score.

Final of the both events will be held on Tuesday. 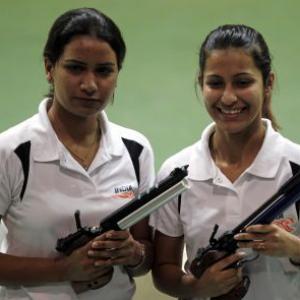