Amul, the dairy cooperative managed by the Gujarat Cooperative Milk Marketing Federation Ltd, will sponsor the Indian contingent for the London Olympics.

The Indian Olympic Association entered into an agreement with the country's largest food brand in this regard in Delhi on Monday. It was signed by IOA secretary-general Randhir Singh and R S Sodhi, Managing Director, GCMMF.

"Under this agreement Amul, the official sponsor, will provide Rs 1 crore which will be spent on athletes who have already qualified for the London Olympics. Rupees two lakh each would be given to them. So far, 45 athletes, including 16 hockey players have been selected. In all, 75 persons will go to London as part of the contingent," Vijay Kumar Malhotra, acting president of the IOA, told journalists.

"Amul is committed to strengthening the Olympic movement in India and encouraging the young generation from all corners of the country to take up Olympic sports," said Sodhi.

He ruled out raising the sponsorship amount this year, saying the company will take stock of the situation next year.

"It all depends on how we perform," he added.

Asked why the IOA has not yet named a chef-de-mission for Indian contingent to the Games, Malhotra said there is still time.

"We have received requests and recommendations from a number sources; we will have to take a decision," he added.

Commenting on the Indian hockey team's 8-1 victory over France in the final of the Olympics qualifier on Sunday, Randhir said "the team deserves all the praise and a pat on the back".

"I hope that the team continues to play in the manner in which they played against France. If that happens, the team will give good account of itself," he added.

The IOA will meet on March 1 to take decisions regarding some crucial issues. 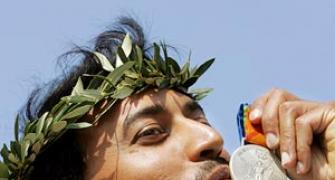 'IOA may decide on London participation under protest'