News
Business
Movies
Sports
Cricket
Get Ahead
Money Tips
Shopping
Sign in  |  Create a Rediffmail account
Rediff.com  » Sports » How I slayed my demons and won an Olympic medal

'Sport is cruel, as is life, which is why winning becomes sweet.' 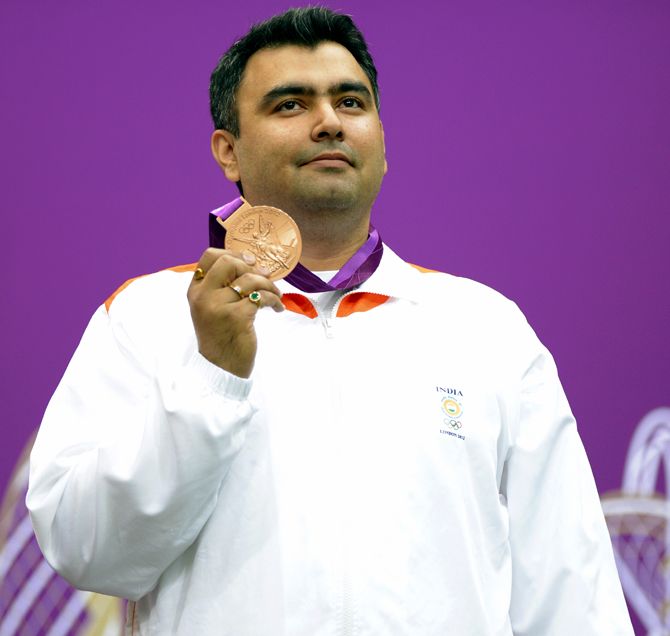 Gagan Narang etched his name in the annals of Indian sport by winning a bronze medal in the 10m air rifle event at the 2012 Olympic Games in London.

That medal somewhat made up for the disappointment of narrowly missing out on the final at the Games in Beijing four years earlier.

It was a thrilling battle in the final in London, but Narang brought upon all his experience to win the elusive medal by the slimmest of margins. He missed out on a silver medal by 000.4 points.

That was India's first medal at the 2012 Olympics, kicking off a record haul of six medals -- the most won by the country at any Olympics.

Narang, 37, has also been instrumental in grooming young shooters through his Guns for Glory Foundation, which he established in 2011.

The Gagan Narang Sports Promotion Foundation, which was conferred the Rashtriya Khel Protsahan Puraskar last year, trains nearly 1,000 shooters every year and has 15 centres across India.

Elavenil Valarivanis, one of his wards, is already making waves in the sport, having won a gold medal at the ISSF World Cup in Rio de Janeiro last year.

"Holding out till the end is the test of one's character and we as sportsmen and women have to show that time and again," Narang tells 's Harish Kotian/Rediff.com.

Tell us about your achievement at the London Olympics.

Winning an Olympic medal is about following a process, a road map.

I started planning for London almost a month or two after Beijing finished. I had set myself the task of finishing on the podium. I went on a reverse engineering mode to achieve it.

I was helped by my team and coaches to prepare a roadmap and the good thing is that I could follow it well.

Shooting is a cruel sport where the smallest of margin matters. You narrowly missed out on a silver medal in London. You had to endure a tough fight from China's Wang Tao in the final. You showed great composure when it mattered, shooting 10.7 in the end to clinch the bronze medal.

I guess sport is cruel, as is life, which is why winning becomes sweet.

Holding out till the end is the test of one's character and we as sportsmen and women have to show that time and again.

There is very little difference between the one who finishes first and fifth and that's what makes sport cruel.

Did you draw from your experience of narrowly losing out on a place in the final at the 2008 Olympics at the London Games?

By the time I reached London, I was three Olympics old and had peaked, matured well as a shooter to win a medal.

Happy that I could slay the demons of Beijing (in London).

How did you take up shooting?]\

As a child I dabbled in a lot of sports... cricket, hockey, tennis, table tennis. I have tried my hand at each of these sports as I was encouraged by my parents.

But it was shooting that grabbed my attention.

I started shooting at a fair on the Marina beach in Chennai, like many ten year olds would do.

In school I got a teacher who encouraged me to continue the sport. Persistent effort begun to yield results in the following years. 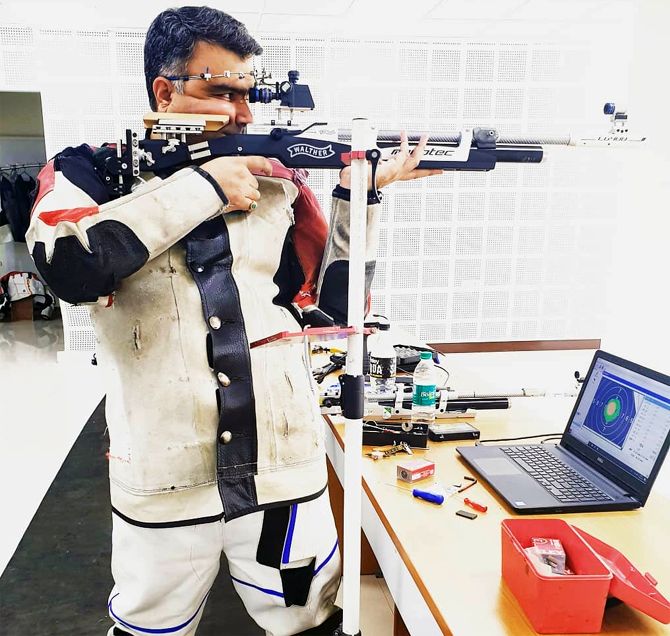 You are inspired greatly by Barack Obama. What is the connection?

There is no connection really. But yes, I am greatly inspired by him, by his oratory.

I won my World Cup final medal with a world record score in 2008 the day he was elected. So the moment was special for me.

You founded the Guns for Glory academy to provide a platform for young shooters in the county. Your wards Shreya Agarwal and Elavenil Valarivan have done well. How does it feel when your wards do well at the top level?

The idea of the Gagan Narang Sports Promotion Foundation and helping the shooting fraternity through GFG was to spread the sport at the grassroots, to enable shooting to become a mass sport.

Elavenil and Shreya came from our effort to take the sport to the hinterland.

Elavenil was from the Gujarat state sports programme. Shreya, a product of the Jabalpur academy, was our first branch.

You founded the academy when you were an active shooter. Did it help your shooting as you trained young kids?

I have never actively trained anyone.

It's a huge full time responsibility which while I was training myself is not fair on my part to take.

But I did train with them, mentored them, motivated them and shared my experiences.

When I did so, they picked up my method and progressed well.

It also helped me stay in touch with what was happening at the time. Even now I train with them.

Was the 2010 Commonweath Games in New Delhi the turning point for Indian shooting?

The 2010 Commonwealth Games set the system and pace for all sport in the country and gave us opportunities to spread our wings and fly and perform to our hearts's content.

It did set the pace and our current sporting performances across all sport are the result of the constant changes, evolution of sport in the country through Khelo India and top schemes.

India has won 15 quota places in shooting for the Tokyo Olympics. Could this be India's best performance in an Olympics if out shooters live up to expectations?

Most definitely. Fingers crossed for that. 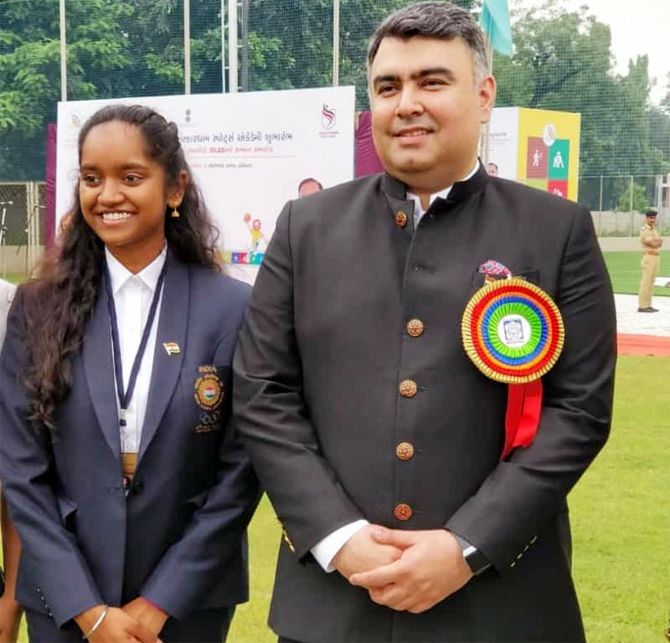 Was it the right decision to postpone the Tokyo Olympics by a year?

It was the best decision under the given circumstances.

There was no way that the Olympics could be held this year because of the coronavirus pandemic.

First, the graph has to flatten, then the epidemic has to be eradicated and then the question of having sports events. It has been cancelled in the best interest of sportspeople.

Everyone understands the importance to stay home and stay safe for themselves and for the safety of others when we are dealing with an invisible enemy right now.

Given that shooting is as much a mental as technical sport, will this delay of a year affect the shooter's psyche?
I am asking this because though a shooter participates in many World Cups and other big events, the ultimate goal is the Olympic Games and everything in the course of four years is meticulously planned towards it.

That is true for most of the Olympic disciplines where the ultimate pinnacle of glory is the Olympic Games.

So everyone wants to be at their peak and best prepared for the event.

I am sure everyone will work on the mental aspect of the game while being on a break .

Given that you have been a successful shooter yourself and also been coaching some of the top young shooters in the country at your academy for the last so many years. How do you think this delay will affect the shooters? What will your advice be to the shooters?

It will be very individualistic. Very difficult to say collectively how it will matter to people.

How are you spending your time locked down at home? Are you training at home?

I have my parents to take care of. I have a lot of backend jobs to run GFG and this is what I am doing sitting at home.

Besides springcleaning out old equipment, cleaning out all the junk I have accumulated over the years living out of my suitcase.