'I will study at a private English medium school and become an IAS officer, my aim is clear.' IMAGE: Sonu Kumar implores Bihar Chief Minister Nitish Kumar to listen to him during the CM's visit to Kalyan Bigha in Nalanda district, May 14, 2022. All Photographs: ANI Photo

At an age when most children in Bihar are playing games on mobile phones or playing in the streets and fields, a 11-year-old Class 6 student at the Kalyan Bigha Middle School in Harnaut, Nalanda district, is giving tuitions to younger students so that he can earn some money and support his school education.

Sonu Kumar has made up his mind to leave the government school he attends and enrol at a private English medium school so that he can achieve his dream of becoming an IAS/IPS officer.

When Bihar Chief Minister Nitish Kumar visited his ancestral village Kalyan Bigha in Nalanda district on Saturday, May 14, 2022, Sonu was among the villagers who gathered to see him. Sonu's repeated entreaties of 'Suniye na Sir' caught Nitish Kumar's ear and he stopped interacting with other villagers to listen to the child.

The quality of education imparted at his government school, Sonu told the chief minister, was of poor quality, and asked if Nitish Kumar would help secure him admission at a private school.

Sonu says he informed "Nitishji" and local media representatives that his father, who is employed as a milkman, does not have the financial means to educate him.

"I want quality education for a career as IAS or IPS," Soni insists, adding, "Hopefully, the government will fulfill my dream."

Since his encounter with the chief minister, several officials, including district education officers, have met Sonu following Nitish Kumar's instructions that they help the child pursue his education.

"As the teachers in my school lack knowledge and are hardly able to teach me properly," says Sonu, "I have purchased books, a smart mobile phone and Internet connection for my studies." "We know Sonu is brilliant and wants to study in a good school," says his mother Leela Devi, "but we can't do anything. This forced him to request Nitish Kumar for help."

Leela Devi has not been to school herself, but knows that if Sonu gets quality education he will achieve something in his life.

"Since early childhood Sonu has been impressing people, particularly outsiders, by his knowledge and confidence to communicate with young and old," says Ramnaresh Prasad, an elderly villager. IMAGE: Sonu Kumar speaks to the media about his meeting with Nitish Kumar.

Another villager, Ganesh Kumar, says Sonu needs to be carefully nurtured with proper education and environment.

"Sonu is a gifted child and has been working hard," says Ganesh Kumar.

Sonu's school teachers are unhappy over his revelation that the school has poor quality education and the teachers lack knowledge.

No school teacher agreed to speak to this correspondent for this feature.

"Sonu is right," says Ganesh Kumar. "The teachers are not able to teach children." 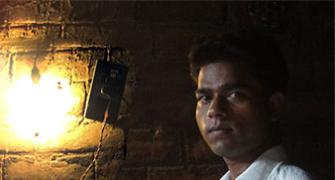 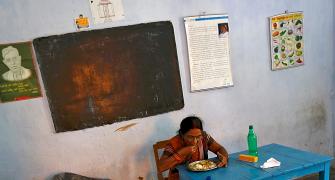 Why Bihar's students are angry