External Affairs Minister SM Krishna who wrapped up his three-day visit to Nepal on Friday said his meetings with the country's top political leadership was useful. Though Krishna emphasised on the importance of completing the peace process and the growing anti-India rhetoric in Nepal, the big questions remains -- are these concerns going to see any fruition in the near future? Shubha Singh reports.

External Affairs Minister SM Krishna's visit to Kathmandu last week provided him an opportunity to meet the political leadership of Nepal at a time when the term of its Constituent Assembly is nearing an end. The Constituent Assembly is likely to complete its extended term at the end of May without a draft constitution in sight -- a situation that will lead to a constitutional crisis jeopardising the peace process.

The external affairs minister had a simple message for the leaders of the political parties. He spoke of India's abiding interest in developments in Nepal and said that the peace process must be completed at an early date. He stressed on the crucial importance of preserving the professional integrity and apolitical nature of the Nepal Army.

Krishna also conveyed the Indian government's "serious concern" at the attacks on the Indian ambassador to Nepal as well as Maoist chief Prachanda.

His meeting with Prachanda was described as "free and productive" exchange of views. An anti-Indian mood is at its highest among some sections in Nepal; India is accused of 'interfering in Nepal's internal affairs' at almost any development in the country. The Maoist cadres have been on a campaign of defacing foundation stones and the tricolour at Indian assistance programmes.  Maoist supporters have been showing black flags to the Indian ambassador when he travels out of Kathmandu. They have also been targetting Indian businesses and joint ventures.

Krishna told the Nepalese media just before his departure from Kathmandu, "I conveyed that the peace process must be completed at an early date and that it was essential to move ahead with resolution of other political issues. I was assured by the Nepalese leadership that they recognised the crucial importance of preserving the professional integrity and apolitical nature of the Nepal Army."

The minister added that he conveyed India's serious concern on the attacks on the Indian ambassador and requested the Government of Nepal to provide adequate safety to Indian diplomats and diplomatic premises in Nepal. He also pointed out that Indian investment would dry up if the investors were harrassed in Nepal.

Nepal is heading for a constitutional crisis at the end of May. Squabbling leaders have resulted in revolving-door governments as each of the major political formations has headed a government in turn. The highly contentious issue of integrating the armed Maoist combatants in the Nepal Army still remains unresolved with the potential of derailing the peace process.

The two-month old Jhalanath Khanal government is still to settle down as the tussle over the home ministry portfolio continues. Once promised to the Maoist party under a deal with Prachanda, internal wrangling within the UML at giving the sensitive department to the Maoists has stymied the proposal.

The election of the Khanal government ended eight months of a stalemate with a caretaker government. Repeated rounds of polling in the Constituent Assembly could not elect a prime minister after the Maoists protests forced Madhav Nepal's UML led government to quit.

Finally, Prachanda struck a secret deal with Jhalanath Khanal of the UML with the condition that the home portfolio was go to the Maoists, and a rotational system whereby the Maoists would get their turn to head the government will be in place. It was agreed that a separate or mixed force would be created for the armed Maoist combatants. However, the angry reaction within the UML on the home portfolio and "a private army for the Maoists" has delayed cabinet formation.

Having joined the mainstream and contested elections, Maoists are confronted with the problems of dissidence that are a normal part of political activity. The hardline group among the Maoists advocates a return to the people's revolution while Unified Communist Party of Nepal -Maoist Vice Chairman Dr Baburam Bhattarai favours working with the mainline political parties for a democratic constitution.

Prachanda, while addressing party meetings has often spoken of using the present interregnum for preparing for a people's takeover. Prachanda blames India for the loss of his government when he sought to sack the then army chief over the issue of integrating the armed cadres into the Nepali Army. He also blames India for using the small Madhesi parties to block his election as prime minister. Prachanda is believed to have put forward his views during his meeting with Krishna.

The external affairs minister described his Nepal visit as "useful". During his official meetings, Krishna took up the subjects of terrorism and smuggling of fake currency, the revised extradition treaty and the finalising of boundary maps. He also discussed the security of Indian investments in Nepal. He offered India's "supportive psychological role" in early conclusion of the peace process and constitution drafting.

Some Nepali Congress leaders have called for fresh elections to be held if the Constituent Assembly does not complete its task of drafting a constitution. Some of the Madhesi political parties have also voiced similar opinions.

The expectation is that fresh elections would reduce the number of seats the Maoist hold in the legislature since the Maoists actions in the government have eroded their support among the people. There have been talks of the president taking over with the help of the army -- this could lead to a confrontation with the Maoists. 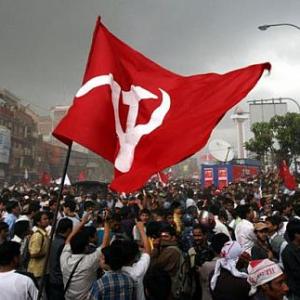 Why India fears democracy in Nepal