The Election Commission sent a notice to Mangal Prabhat Lodha, the BJP's Mumbai chief. This is probably because a leading newspaper highlighted his utterances on its front page.
Jyoti Punwani reports. The Mumbai riots have suddenly been resurrected this election season.

It is not just the Babri Masjid case in the Supreme Court that arouses memories of those dark days. Politicians have found them useful 26 years later to woo voters.

Last week, Nationalist Congress Party candidate Ajit Pawar regretted the arrest of Shiv Sena chief Bal Thackeray for his riot-related writings in 2000. The arrest had been ordered by his party leader Chhagan Bhujbal as Maharashtra's then home minister in the Congress-NCP ruling coalition.

On Thursday, the Indian Express reported (external link) that the Bharatiya Janata Party's Mumbai president and Malabar Hill MLA Mangal Prabhat Lodha reminded a Hindu audience in the BJP bastion of Mumbadevi, an old area dominated by small shops, of the violence of that time with these remarks:

The 'person who will be elected with votes from these lanes' (where mostly Muslims live), referred to Amin Patel, the Congress MLA.

The man Lodha was campaigning for was Pandurang Sakpal of the Shiv Sena, the party indicted for the 1992-1993 riots by the Justice B N Srikrishna commission of inquiry.

That's not the only irony in Lodha's tirade against 'these lanes', a tirade reminiscent of Bal Thackeray's poisonous editorials during the riots.

Lodha's description is true. Those lanes were awash with violence, but violence by whom?

One of the first incidents of the 1992 riots took place barely a kilometre from where Lodha was inciting his audience.

Muslims came out late that night too, enraged by the Babri Masjid demolition, from the lanes mentioned by Lodha. Unarmed, they vent their fury on bus stops, BMC vans, policemen and temples.

Expecting this reaction, the police were ready, and reacted predictably. Five Muslims were injured in police firing that night.

Why were the Shiv Sainiks obstructing traffic?

The police could give no explanation. They reacted to the Sainiks's lawlessness too, predictably: They did nothing.

Similarly, they did nothing as the Rashtriya Swayamsewak Sangh created hostility towards Muslims in the six months preceding the Babri Masjid demolition, in the 5 km radius Lodha referred to (as well as in other parts of the city).

The Vishwa Hindu Parishad and Bajrang Dal freely held rallies in that area, exhorting audiences not to let 'Ramdrohis' go alive; they put up boards that incited Hindus to attack Muslims.

On December 6, the VHP held ghanta nads (ringing of temple bells) to coincide with the attack on the Babri Masjid. The police told the Srikrishna Commission they regarded these as religious programmes.

In January 1993 too, these '5 kms' were engulfed with violence -- from both sides. This was the phase in which maha aartis were held on the roads, organised by the RSS and the Shiv Sena. Some maha aartis held around Mumbadevi led to violence against Muslims.

Of course, the BJP city chief cannot be expected to recount these incidents of violence by Hindus. But he forgets perhaps that the events of those days have been meticulously documented by a then Bombay high court judge.

Lodha referred to the bomb blasts after 1992. Here too, his allegations were untrue.

Were the bombs that exploded across the city on March 12, 1993, manufactured in the lanes surrounding Mumbadevi?

It is now well-known that after receiving training in Pakistan, the core group involved in executing those blasts assembled the bombs at prime accused 'Tiger' Memon's residence at the Al Hussaini building, Mahim, north central Mumbai.

More than 5 kms away from Mumbadevi, for sure.

Or was Lodha talking about the Zaveri Bazar blasts (near Mumbadevi) of 2003, for which three persons, including a married couple, were sentenced to death?

According to the prosecution, the bombs used in the blasts were manufactured in the couple's Andheri home -- north west Mumbai, even further away from Mumbadevi than Mahim -- and carried by taxi to the blast site.

Perhaps Lodha was referring to the 2011 Zaveri Bazar blasts?

Charges were framed in that case just last month. The 11 accused hail from all corners of the country, including one who was said to be working for the Delhi police special cell and the Intelligence Bureau! Newspaper reports at that time quoted the police as saying that the explosives were sent from Delhi.

So which bombs were manufactured in the lanes where Amin Patel's voters live?

The BJP city chief is no spring chicken, so the false accusations he made could not have been born out of ignorance.

Indeed, these provocative remarks are in keeping with some of his past actions.

In 2013, just before Bakri Eid, Lodha led a Bajrang Dal dharna at the Agripada police station, demanding that the police seize the buffaloes and bulls brought to the Muslim areas nearby for sacrifice.

According to municipal rules, big animals can only be slaughtered at the Deonar abattoir, north east Mumbai, which is far from the old Muslim areas of Mumbai.

Acknowledging that slaughtering big animals near their residence was against the rules, Muslims pointed to the many violation of rules by Hindu devotees during Ganesh Chaturthi, Holi and Diwali.

Why the double standards, they asked.

In fact, the police would have turned a blind eye to this violation had it not been for Lodha, who is not just a BJP leader, but also ranked the richest builder in the country.

The area's Muslims, incensed at Lodha's demand, were ready to confront the BJP chief and his Bajrang Dal. It was only the frantic efforts of mohalla committee members that averted a riot.

The next year, this man was elected MLA.

This elected representative who has sworn to uphold the Constitution made some more communal and inflammatory remarks during his Mumbadevi speech, talking about the 'burden' Amin Patel would be for 'us'. Considering there was a BJP-Sena government at the Centre, state and municipal corporation, how would they accept another 'flag in the middle', he asked?

Did Lodha mean the Congress tri-colour would mar the sea of saffron flags he envisaged throughout Mumbai?

Saying that the drums of war had been sounded, and that the 'shaitaan' was at the border, Lodha urged his audience, many of them traders, to wipe out the name of 'paapi Pakistan' from the map.

The Election Commission has sent a notice to Lodha and Sakpal for Lodha's remarks. This is probably because a leading newspaper highlighted them on its front page.

For, even when it was independent and powerful, the Election Commission never took note of Bal Thackeray's election writings, not even when they were brought to its notice.

Interestingly, two-term MLA Amin Patel refused to comment on Lodha's speech though it was directed solely against him and his community.

The BJP MLA's words in fact amount to an offence under Section 153 A (creating communal enmity). But then that is an offence the Congress has never taken seriously. 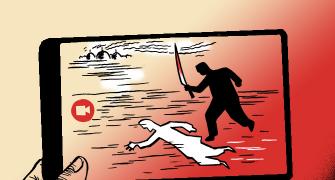 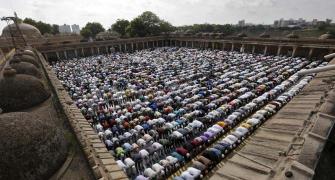 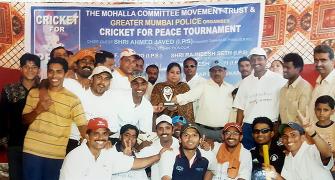 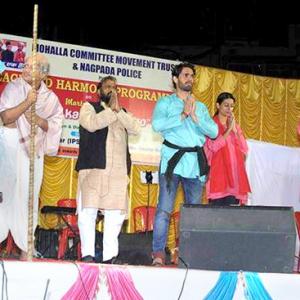