On August 31, a fresh report was supposed to be submitted, and his plea for bail on health grounds was to be decided.
Before that could happen, the 81-year-old poet was stealthily discharged and taken back to the Taloja jail hospital on August 25.
Not even his lawyer on record, Advocate Satyanarayanan, was informed.
Jyoti Punwani reports. 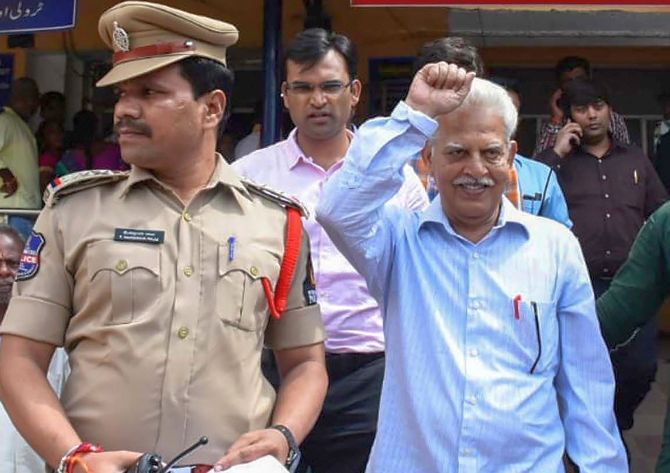 IMAGE: Professor Varavara Rao after he was produced in a Pune court last year in connection with the Bhima Koregaon case.

The last few days have shown that the Right to Health, defined by the Supreme Court in more than one judgment as an integral part of the Right to Life, is being denied to the jailed intellectuals awaiting trial in the Bhima Koregaon case.

Varavara Rao's is the starkest illustration of this denial.

The only medical report on him, dated July 30 and submitted on court orders by the Nanavati hospital in north west Mumbai, states that Professor Rao's health needs close monitoring.

On August 31, a fresh report was supposed to be submitted, and his plea for bail on health grounds was to be decided.

Before that could happen, the 81-year-old poet was stealthily discharged and taken back to the Taloja jail hospital on August 25. Not even his lawyer on record, Advocate Satyanarayanan, was informed.

Does that mean Varavara Rao is fine?

Those following his case have their doubts. For, as Advocate Satyanarayanan points out, this sequence of events is disturbingly similar to what happened the first time Rao was hospitalised.

On May 28, Professor Rao was admitted to the government-run J J Hospital after he fainted in jail.

His bail hearing was scheduled for June 2.

On June 1, the octogenarian was discharged and taken back to Taloja jail.

On June 2, the court was told he was fine as the hospital had discharged him. His bail was denied.

The reality was quite different. He was not fine. Tests prescribed by the J J Hospital were not done at the Taloja Jail Hospital.

By the end of the month, the man who has spent his life travelling across the country, addressing meetings and writing poetry despite long spells of imprisonment, could neither brush his teeth on his own nor speak or write one coherent sentence.

After a public outcry forced the jail authorities to admit him to the J J Hospital on July 13, his family found him sitting in soiled clothes on a soiled bedsheet, unable to recognise his wife.

He was also found to be Covid positive.

Under pressure from the National Human Rights Commission, Professor Rao was admitted to the super speciality Nanavati Hospital on July 19.

On July 30, the hospital reported that he had persistent hyponatremia, suffered from paroxysmal bouts of coughing, and would require close monitoring.

Hyponatremia is defined by Wikipedia as low sodium concentration in the blood; mild symptoms are a decreased ability to think.

Now, he is back in jail. On August 31, when his bail petition comes up for hearing, will there be a repeat of what took place on June 2?

Will the court be told that he is fine, and being looked after in the Taloja Jail Hospital, the very place under whose care Rao became a wreck? 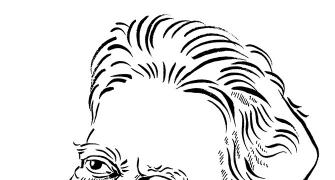