Its 'failure not just affects the military's effectiveness but could also be politically vulnerable for the BJP,' observes Ajai Shukla. 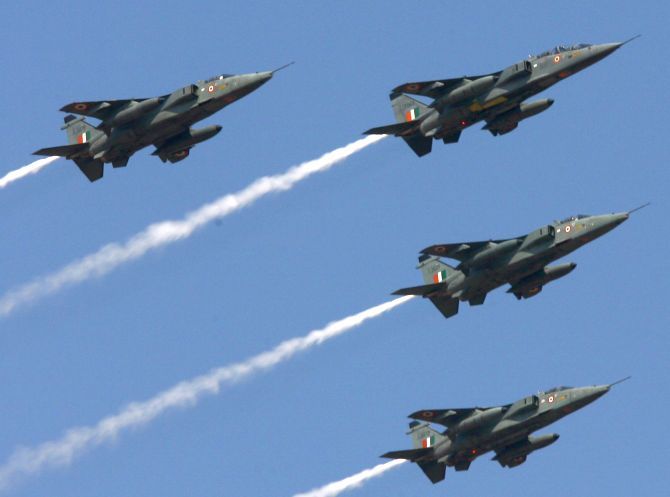 With the current National Democratic Alliance government's five year custodianship of national defence drawing to a close, the acquisition policy landscape is littered with grand initiatives that failed to reach a conclusion.

When he was defence minister, Manohar Parrikar repeatedly promised a simplified defence procurement procedure that would expedite weaponry purchases.

Eventually issued after more than a year's delay, DPP-2016 turned out 9 pages longer than its already gargantuan, 421-page predecessor, DPP-2013, and aimed no higher than reducing procurement time from 137 weeks to 126 weeks.

By that year, India is to increase defence exports ten fold to $5 billion, while becoming self-sufficient in building fighter aircraft, helicopters, warships, armoured vehicles, missiles and other systems.

This draft DPrP 2018 was attended by such urgency that stakeholders were given just one week to submit their responses. Nothing has been heard of it since then.

Then, in April, the ministry of defence issued a draft offsets policy that proposed allowing vendors to discharge offsets by creating defence manufacturing infrastructure (such as testing laboratories, ranges and skill centres) through sponsoring projects that generate high-technology, and through transferring critical technologies that do not exist in India.

It proposed special incentives for investments in Sitharaman's hobby horse -- two defence industry corridors she is pushing in Tamil Nadu and Uttar Pradesh.

This draft policy too has sunk without a trace.

In February, Sitharaman set up the 13-member Raksha Mantri's Advisory Committee on Ministry of Defence Capital Projects to review critical weapon procurements and identify why they were facing delays. It was to submit an 'initial status report' by March 31, 2018, but the committee has never once convened.

Given this depressing consistency, it should not be surprising that the initiative to establish an effective Defence Procurement Organization, too, has made little headway.

This failure is especially significant since it not just affects the military's effectiveness but could also be a political vulnerability for the Bharatiya Janata Party.

Accusing the Congress-led United Progressive Alliance of slothfulness in procuring weapons for the military, the BJP's 2014 election manifesto had promised to: 'Modernise armed forces, and increase the research and development in defence, to develop indigenous defence technologies and fast track defence purchases.'

Even so, it took the National Democratic Alliance government almost two years to kick off procurement reform. After the Dhirendra Singh Committee in 2015 articulated the need for setting up a DPO outside the MoD structure, Parrikar referred the question to another committee.

Constituted in April 2016 under a respected former defence acquisitions chief, Vivek Rae, that committee quickly ran into a disagreement.

While the MoD had directed the committee to envision a brand-new DPO, Rae believed it would be better to refashion and strengthen the existing defence acquisition structure.

Given this fundamental disagreement, Rae resigned in September 2016 and Pritam Singh, who the MoD described as a 'management expert', became chairman.

In March 2017, the MoD told Parliament the committee had 'recommended the creation of a central, autonomous, empowered professional organisation to build up indigenous defence capability as a strategic imperative for long-term self-reliance'.

Since then, there has been silence. The report is said to be circulating from one MoD desk to another on a slow journey to oblivion.

However, whether for this government or the next, there is no avoiding DPO reform, for which four important aspects must be kept in mind.

First, the new DPO must holistically focus on defence acquisition, not just procurement.

While procurement involves the straight purchase of existing defence equipment from global or domestic 'original equipment manufacturers', acquisition includes meeting the military's need through channels such as indigenous development.

The Defence Research and Development Organisation is currently pursuing 52 mission-mode projects involving an outlay of over Rs 370 billion. But these rarely feature in the formal defence acquisition process since the DRDO funds those projects and the lines of authority run through DRDO Bhawan.

Because the military gets a free ride on MMPs, it is not a stakeholder and does not seriously consider MMPs as acquisition options.

To overcome this, the military must take financial stakes in MMPs and participate in their oversight.

The reformed DPO must be empowered to meet a service requirement through direct purchase, manufacture under technology transfer, or through an MMP nearing fruition.

The chasm between the DRDO’s efforts and those of the acquisition managers must be bridged.

Second, DPO reform must be wary of setting up a brand new structure and midwifing a new acquisition cadre to man a monolithic new organisation.

Each acquisition is a separate undertaking, with different requirements that must be met through purpose-built Integrated Programme Teams, headed by programme managers who remain in position for the duration of the acquisition.

Each IPT -- depending on whether it is acquiring a submarine, tank or communication grid system -- should include the specialists needed for that specific task.

The specialist requirement will vary not just from project to project, but also at different times within the same project.

The IPT, therefore, must be constituted and re-constituted continually, in order to optimise the use of manpower -- which can be drawn from diverse sources -- to contribute to IPTs when required.

Such flexible IPT structures should eliminate the rationale for a rigid and centralised DPO.

In fact, IPTs are already part of the 'Make' procedure under the DPP and have been used in the Indian system for major programmes like the Tejas fighter and the Arihant-class nuclear submarines. But these have not been constituted optimally.

Full in-house capability and rigid project management structures are a luxury that India cannot afford, as this adds significantly to the cost of acquisition.

Third, a refurbished DPO must focus exclusively on equipment acquisition, while freeing up other senior MoD officials from the time-consuming involvement in procurement.

The current procurement structures pull in all the service chiefs and the secretaries of defence, defence production and defence R&D.

The defence secretary, who ought to focus on a long-term strategy, force planning and structuring, defence diplomacy and other strategic tasks, spends 60 per cent of his time on procurement.

The answer is to upgrade the defence acquisition wing, which is currently under the department of defence, into a full-fledged department under a secretary-level official. This does not necessarily require the creation of an additional secretary's post.

Instead, the department of ex-servicemen welfare, which has elicited a high level of dissatisfaction amongst veterans, could be placed under the defence secretary who -- relieved of his acquisition responsibilities -- would have the mind space to give it a new direction.

The final, and perhaps trickiest, issue is the proposal to man the new DPO with a cadre of specialist acquisitions managers.

On one hand, the Indian Administration Service will resist any proposal for senior acquisition posts to go to another cadre.

And on the other, bright officers will resist prolonged tenures in acquisition, which is widely regarded as a high-risk assignment with little to recommend it in terms of power, influence or contact building.

This is a 'human resource' problem that the United States system has grappled with unsuccessfully for half a century. An answer is not readily forthcoming. 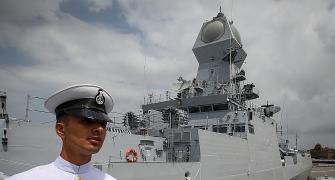