Thiruvaiyuru, where composer-saint Tyagaraja lived, is an annual pilgrimage for Carnatic musicians, eminent and unknown, young and old, points out V Ramnarayan. These words from a verse by Purasu Balakrishnan reflect the ecstatic joy experienced by musicians and audiences alike during the annual Tyagaraja Aradhana at Thiruvaiyaru on the banks of the Kaveri in the Thanjavur delta region of Tamil Nadu.

The occasion commemorates bard-saint Tyagaraja (1767-1847), widely regarded as primus inter pares among the Trinity of vaggeyakaras or composers (Muthuswami Dikshitar and Syama Sastri, his contemporaries, being the other two).

All three were both born in the temple town of Tiruvarur, not far from Thiruvaiyaru where Tyagaraja lived, and sang of his ishta devata, Rama, while pioneering the development of a sophisticated art form that has come to be known as classical Carnatic music.

The anniversary is observed in January, on Bahula Panchami day, January 15 this year. IMAGE: A painting of Tyagaraja from the Jaganmohan palace in Mysuru. Photograph: Kind courtesy Wikimedia Commons

It is a marvel of syncreticism that Tyagaraja, whose parents migrated from Telugu country, has been revered by succeeding generations of Tamil-speaking music aficionados.

Also significant is the fact that his samadhi is preserved immaculately thanks to the devotion and munificence of Bangalore Nagaratnamma, a woman of devadasi descent, something that warring upper caste factions did not or could not accomplish.

Supported through the decades by the family of the late Congressman G K Moopanar, the festival is a pilgrimage for Carnatic musicians young and old, men and women, vocalists and instrumentalists, who congregate in a spirit of surrender -- to their gods, to their music and, above all, to Tyagaraja.

A highlight of the Aradhana is the traditional unchavrutti, a procession of bare-chested vidwans and sari-clad women around the samadhi.

Each of them then performs Tyagaraja's kritis without improvisation or embellishment, all eventually coming together in a majestic climax of a choral rendering of the composer's pancharatna (five gems) kritis in the ragas Nattai, Gowlai, Arabhi, Varali and Sri.

Over the years, the homage has acquired elements of razzmatazz, a televised spectacle marred by garish backdrops and banners and hoardings, even protests by groups affiliated to political parties alleging anti-Tamil or casteist machinations on the part of the organisers.

The Festival of Sacred Music presented by the Prakriti Foundation, a month or so after the Aradhana, is held at beautiful, tastefully decorated venues like the Diwanwada palace and the Panchanadeeswara temple, and is not limited in scope by Tyagaja's compositions or even Carnatic music.

My own favourite Thiruvaiyaru experience was to travel there by road from Chennai to attend the 24-hour-long akhandam of Tyagaraja songs on Maha Shivaratri (on February 21 this year).

It culminates in a stirring finale of ritual at dawn followed by the distribution of delicious prasadam at the humble Tyagaraja temple some distance from the samadhi, on the banks of the Kaveri.

This is a mercifully low-key affair, and is still beautifully devout in the way the musicians pay obeisance to Tyagaraja.

The unchavrutti proceeds from Tyagaraja's little home -- with an internal wall partitioning it between him and his brother Jalpesa -- to the temple, where the musicians make their offerings to the saint all night long, never repeating a song, thanks to the eagle-eyed attention of the trio of Ramanathan, Viswanathan and Gopal and their unobtrusive team of volunteers.

Sitting on the cool sands of the riverbank and listening to song after song through the night was magical.

My friends and connoisseurs, Ramanathan (a son of past master Ramnad Krishnan), Jayaraman and Raja, had been trying to persuade me for years to join them on this journey.

I finally succumbed in February 2018, travelling in a luxurious SUV, listening to some other-worldly singing by the late Krishnan all the way.

We took an inland route and not the scenic East Coast Road, which then allows you to visit some magnificent temples including the Brihadisvara and Gangaikondacholapuram temples at the tailend of your journey.

My e-mail friend William Jackson, American biographer of Tyagaraja and other great South Indian saint-composers, has written a delightful description of his journey by train, first to Chidambaram, home to the famous Nataraja temple, and on to Thiruvaiyaru, back in the 1980s, accompanied by T Sankaran, music scholar and station director in All India Radio, and cousin of celebrated dancer T Balasaraswati.

Sankaran was a fund of stories that expanded and illuminated the enquiring mind of the young American student of music and theology. Every sight and sound was an eye-opener to him.

The pinnacle was the sight of Sankaran's veshti fluttering in the wind from a bus window after they had both bathed in the Kaveri.

What a serene image from the past! 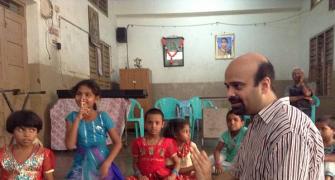 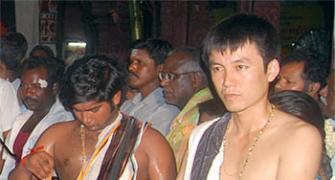 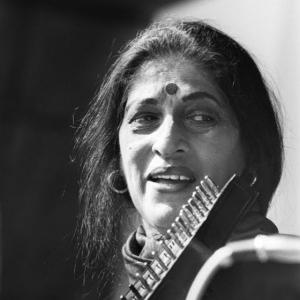