Sign in  |  Create a Rediffmail account
Rediff.com  » News » When Panditji played, women went weak and the gods sat up

When Panditji played, women went weak and the gods sat up 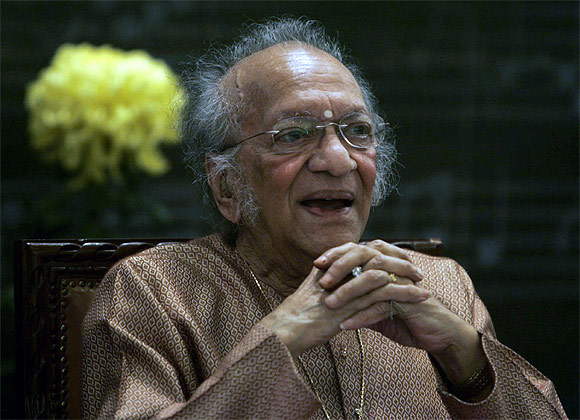 Pandit Ravi Shankar, the man who perhaps symbolised India to the world along with Mahatma Gandhi, passed away in San Diego, California, on Tuesday night.

For the last five years or so, he could not bend his legs, could not raise his arm too high, and had hearing problems. So he sat on the edge of the stage, legs dangling, used two tabla players, had his stage monitors close to him, played a smaller sitar. But he never stopped performing.

"Ami bajate bajate chole jete chai (I want to pass away while playing)," he would say. 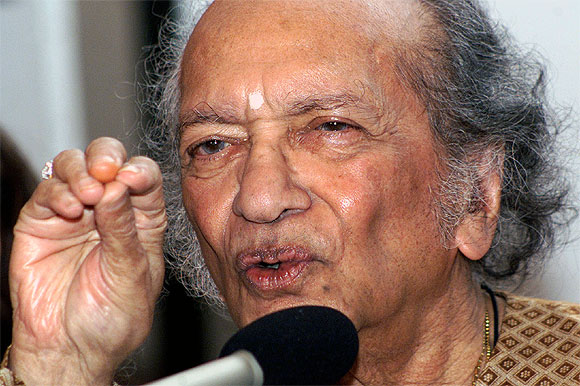 Through his life, he showed the world the power of Indian music -- through his concerts in tandem with Ustad Alla Rakha and Ustad Ali Akbar Khan, and his collaborations with global musical giants like violinist Yehudi Menuhin.

Pandit Ravi Shankar's journey from Kolkata to Varanasi to the world is probably the story of the journey of Indian music and, by extension, India.

He was India's cultural ambassador to the world. He was a musical guru to George Harrison and The Beatles, as well as jazz legend John Coltrane, who named his son after Panditji.

To his extended family of disciples, students, and well wishers, Pandit Shankar was always Guruji.

He nurtured talent whenever and wherever he could (I know of at least one Danish 20-year-old walking into his Delhi house to play his guitar; Guruji patiently heard him play, and then told him if he wanted to take some lessons in Indian music he could go to one of his students).

He took Indian music global and wrote the rules of the modern Indian classical performance.

And when Pandit Ravi Shankar bent that string and flashed his smile, women went weak and the gods sat up.

Music was always divine to him 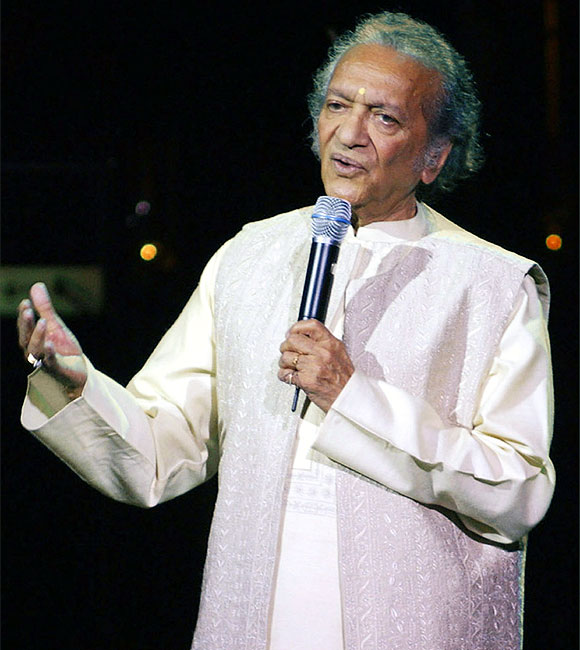 Image: It hurt him that he was sometimes looked at as Mr Rock 'n Roll
Photographs: Reuters

His words -- 'If you like our tuning so much, I hope you will enjoy the playing more' -- at the Concert for Bangladesh in New York in 1971 are as rockstar as it gets. Even now.

But he was deeply rooted. At a birthday party thrown for him by his friends, he once refused to cut a cake because it had been made in the shape of a sitar.

Music was always divine to him, and it hurt him that he was sometimes looked at as Mr Rock 'n Roll.

I met Panditji twice, once over a meal at his house in Delhi in 2002, and once at a performance at his centre in Delhi.

His presence was larger than life.

He had found peace in life too 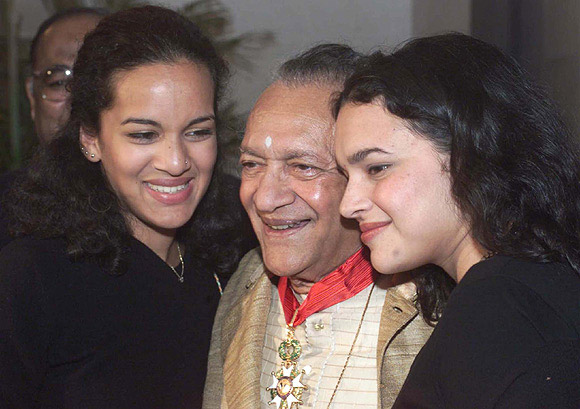 He also said could not listen to much jazz because the harmonies used (the 1 and flat9, he pointed out as an example), sometimes put pressure on his ailing heart.

>He discussed topics from literature to music to art to cinema. Hindi movies, he told me in 2002, were getting smarter. He referred to Dil Chahta Hai as an example.

And he said he regretted that not many people knew he had composed the tune for Sare Jahaan Se Accha.

A lot was made out of his personal life, but I think anyone who has heard the theme tune for Satyajit Ray's film Pather Panchali will be happy that the man who could wrench so much emotion from a metal string found peace in life too.

"We (her father and I) are very close now," Norah Jones, Pandit Ravi Shankar's Grammy-winning daughter, told me when I interviewed her for The Times of India in 2003.

"For the past five years we have reconciled and it has been really good. The only frost within the family is from the press. They are just trying to stir this stuff up, I don't know why. It's sad and they (the media) should leave her (Anoushka Shankar, Panditji's youngest child) out of it. Whether they like my music or not doesn't matter, but leave her out of this."

"She has got her own career, and is very talented. I am very proud of her and she is proud of me. We get along really well, even though we do very different things," she said.

Loving, gentle, razor-sharp, till the end 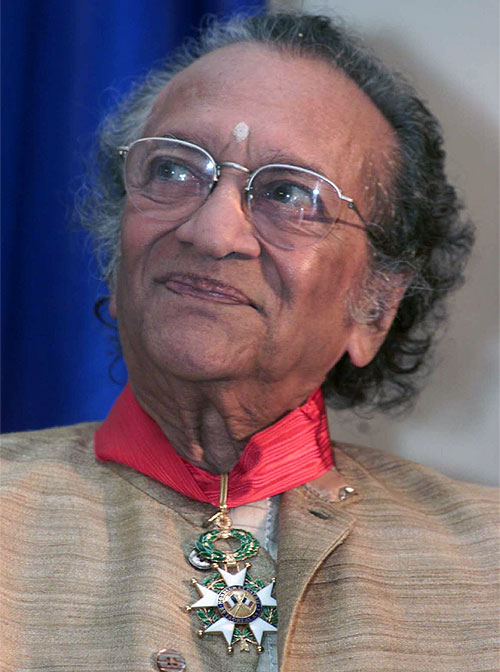 Image: One of the greatest musicians of our time
Photographs: Reuters

He loved children, and I remember both him and Chinnamma, as his wife Sukanya Shankar is to his extended family, being very upset with a Hindustan Times front-page photograph of a child who had been hospitalised after his teacher beat him up.

The day after my wedding ten years ago, when my father-in-law was distraught at his only child going away to another city, Pandit Ravi Shankar had called him up from somewhere abroad; my father-in-law has been his student since 1982.

"Why are you sad?" Guruji told him. "You are not losing a daughter, you are gaining a son."

Before his surgery last week, Guruji insisted to Chinnamma that he speak to certain people, including my father-in-law, who heads the faculty at the Ravi Shankar Centre for Music and Performing Arts in New Delhi, over the phone. They had a long chat, in which he asked about the health of my mother-in-law, who is ill.

That was the kind of man Pandit Ravi Shankar was -- loving, gentle, razor-sharp, till the end.