‘Jaitley was one of the earliest politicians to sense the changing political scenario in Delhi. He had closely watched the rise of the BJP and declining fortunes of the Congress party during the L K Advani era. But it was between 2009 and 2014 as the Leader of the Opposition that he began to read the tea leaves.

‘And thus it was that he introduced the Narendra Modi-Amit Shah duo to Lutyens Delhi,’ says senior journalist R Rajagopalan who had known Jaitley since 1975. 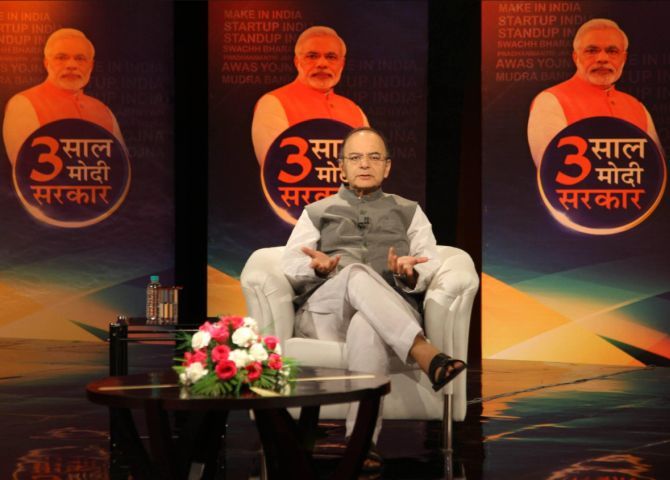 Sushma Swaraj’s sudden passing away on August 6 gave Arun Jaitley a rude shock. As he saw the breaking news on TV, Jaitley began to cry, making doctors tell his family not to give him any emotional shock that will affect him and upset the medical treatment he has been under.

Arun Jaitley had been suffering for more than five years, though he seldom spoke about it. In his passing on Saturday, the national capital has lost one of its finest sons.

How does one describe Jaitley? As a gentleman? Sure. Best strategist ever? Sure. Good planner? That, too. Friendly and courteous with the Capital’s media? Yes and yes. Always helpful? Of course.

But there was so much more to Jaitley than all of the above.

It was he who coined the BJP’s catchy slogans and one-liners thanks to his quick wit.

Jaitley it was who, from 2012, started projecting Modi as a face of the BJP for the post of prime minister -- way before anyone else did, proving he was a cross swimmer against strong tides.

When LK Advani’s name was being discussed in 2013 and at a time when Modi refused to visit New Delhi for deliberations, it was Jaitley who imported the then Gujarat chief minister from Gandhi Nagar to New Delhi.

As a successful Delhi lawyer, Jaitley owned a fleet of cars, all with the the same registration number -- 6666. This wasn’t a typical display of influence and wealth or even superstition, but the essential character of a man who was open, transparent and wore his beliefs on his sleeves.

He led a full life, had a large circle of friends across sectors -- in politics, corporates, legal profession, diplomacy and journalism. And he leveraged them to shape his own career and India’s contemporary politics.

Jaitley was one of the earliest politicians to sense the changing political scenario in Delhi. He had closely watched the rise of the BJP and declining fortunes of the Congress party during the L K Advani era. He had been a minister in Atal Bihari Vajpayee’s cabinet where he learnt the ropes of governance. But it was between 2009 and 2014 as the Leader of the Opposition that he began to read the tea leaves.

Jaitley realised that the ground was shifting in Indian politics. The Advani-Vajpayee era was coming to a close and the nation was looking for a change. The Congress party was embroiled in serious cases of corruption and mismanagement, and was clearly losing the plot. The slogan “government in deep paralysis” represented by Prime Minister Manmohan Singh was hitting home and it was time to change the horses.

Jaitley quickly shifted his political allegiance, left Advani and backed Modi as the prime ministerial candidate. He successfully convinced other second-rung leaders like M Venkaiah Naidu, Sushma Swaraj, Gopinath Munde and Ananth Kumar, to do the same as they were all ardent followers of Advani.

In 2012-13 he assiduously begun the task of reshaping Modi’s image. Using his training as a lawyer, he read up and argued the legal cases stacked against Modi. He began to build a narrative saying how false and politically motivated the cases foisted by the Congress party to tarnish Modi’s image were. He spoke in Parliament, wrote blogs, addressed press conferences and networked with Opposition leaders, all to explain his point of view.

Besides constructing Modi’s external image, Jaitley begun to push for his candidature within party forums. As a result of these efforts, in 2013 Modi was declared as the BJP’s prime ministerial candidate at the party’s Goa session. All along Jaitley was also actively providing legal counsel to Amit Shah who too was caught in a plethora of cases. Since Shah was barred from entering Gujarat during the Sohrabuddin encounter trial, he would often land up in Jaitley’s Bengali Market office in Central Delhi to seek legal help.

In the run-up to 2014 elections, Jaitley began to put his network to use. In 2013, during his morning walks at Lodhi Gardens, he would connect with his lawyer friends and diplomats. In the afternoon he would brief BJP spokespersons on what to say during press conferences and television appearances.

A whole new generation of spokespersons was created by him who would speak in one voice and effectively take up the party line. He would write blogs which became the guide for spokespersons in the southern states such as Andhra, Karnataka and Tamil Nadu.

Jaitley promoted and encouraged younger leaders like Nirmala Sitharaman, Piyush Goel, Bhupendra Yadav, Dharmendra Pradhan, Meenakshi Lekhi and Kirron Kher, and some of them went on to became important ministers in Modi’s Cabinet. In the late afternoons Jaitley would meet up journalists at his Bengali Market office for a “Tikki” party. He loved the Aloo Tikki, hot samosa and tea ferried from nearby joints. Journalists were fed gossip items and news points.

Jaitley knew well how to win friends and influence people. In fact, Jaitley did even better. He understood his own strengths and weaknesses and decided to be the power behind the throne -- an intellectual who would facilitate the rise of a mass leader.

He continued this trait even after Modi assumed power in 2014. In the first two years of Modi 1.0, he guided him from behind the scenes, explained him the way Delhi works, used his network to source career bureaucrats and officials in various professions. Though Modi was well versed in governance as chief minister, he required Jaitley’s support to understand the ropes in Delhi’s corridors of power.

Jaitley also networked closely with regional leaders. He was friendly with almost all politicians, from Nitish Kumar and Lalu Yadav to Sharad Pawar. His role in the Board for Control of Cricket in India as an active player in India’s cricketing world brought him closer to several politicians and corporate honchos. One of them was Farooq Abdullah.

He, however, quietly removed himself from the scene when the cricketing management got caught in various controversies.

Jaitley was the one who brought Modi closer to Jayalalithaa. He won her confidence by advising her in the disproportionate assets case. Whenever he would visit Chennai, Jayalalithaa would always meet him warmly. He also played a crucial role in the BJP tying up with the Telugu Desam Party in 2014.

Modi made Jaitely India’s finance minister and gave him the crucial portfolios of defence and information and broadcasting. He also sought his help on crucial decisions such as cabinet formation, drafting internal cabinet notes, etc. In the first two years of Modi 1.0, Jaitely was his closest collaborator. In fact Modi confided in Jaitely his desire to invite Saarc leaders for his swearing-in ceremony.

Jaitley would also clear the list of journalists who would meet Modi.

But Jaitley did not demur when crucial segments from the finance ministry such as Enforcement Directorate and other investigative wings were brought directly under the Prime Minister’s Office. He was aware of the broad contours of the demonetisation move, but not its timing or announcement.

He accepted Modi’s leadership and respected the massive people’s mandate he had obtained. Though Jaitley was six times finance minister and had held various portfolios and enjoyed various posts, direct elections eluded him. He was always a Rajya Sabha member.

His two major achievements were rolling out the One Rank One Pension scheme for the armed forces and introduction of the Goods and Services Tax. He kept his cool even when senior party leader Subramanian Swamy kept taking pot shots at him, as he knew he had the full backing of the prime minister.

Jaitley’s health started deteriorating from 2017 onwards. In fact that year in a departure from custom he presented the Union Budget while seated. In September 2014 he underwent a bariatric surgery as he was overweight. But health issues kept cropping up. He had a bypass surgery, a kidney transplant and got afflicted by cancer.

He effectively handed over all his responsibilities to Amit Shah long ago in the second half of Modi 1.0. He did not join the Modi 2.0 government citing health reasons, but remained active by writing blogs and voicing his opinion on various issues. In fact his last blog was on scrapping of Article 370 which he describes as “achieving the impossible” by Modi and Shah.

Jaitley, however, would always be remembered as a liberal within the BJP family. He was never a votary of hardcore Hindutva values. He avoided extreme positions and therefore was looked at suspiciously by the RSS leadership in Nagpur.

He was described by some of his friends as the “right man in the wrong party” which he completely disliked.

He wished to be remembered as the intellect behind the powers-that-be, and he succeeded in it.

In sum, would be remembered as someone who smoothened the edges of his party’s mainline leaders and brought them closer to the ways of Lutyens Delhi.

R Rajagopalan, a senior correspondent in New Delhi, had known Arun Jaitley since 1975. 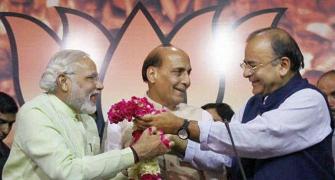