The Shelter Home in the Nilgiris 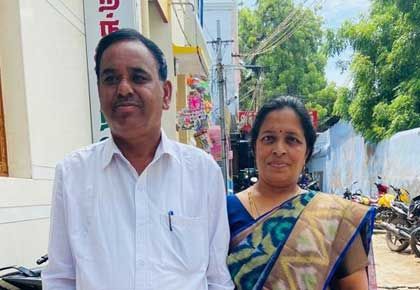 'The people who stay with us were not born orphans; they have been abandoned.' 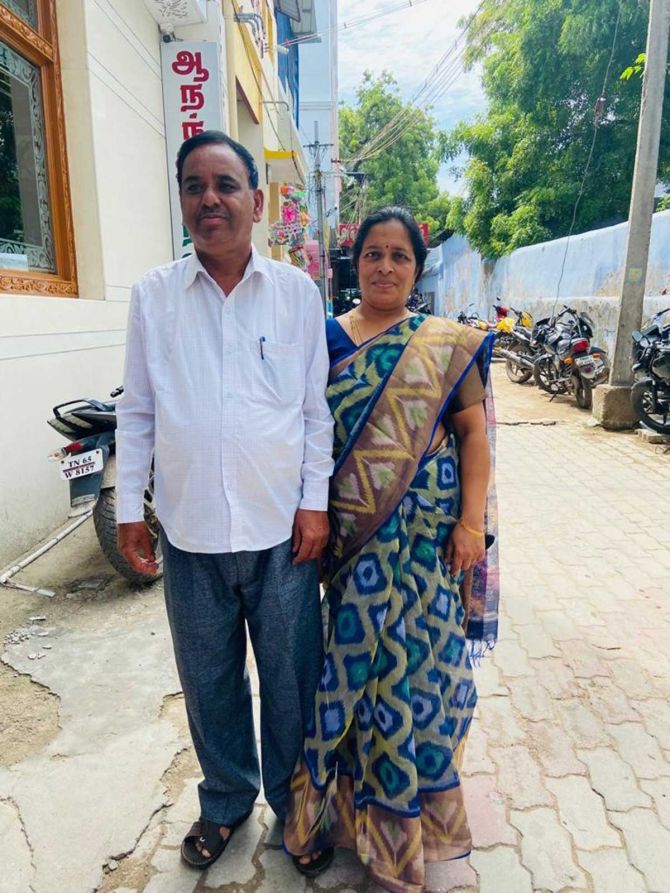 Nineteen years ago, N Ramamurthy -- with the support of his wife Rajeshwari -- took a decision.

He brought home an abandoned, elderly, handicapped, lady who was afflicted with leprosy.

"My parents had passed away," he tells Rediff.com's A Ganesh Nadar. "I could accommodate her in my home."

Ramamurthy was not worried about the fact that she had leprosy and that he had two young children at home. "As a part of my job, I have been working with leprosy patients for 33 years," says Ramamurthy, who recently retired from the Tamil Nadu health department.

What he didn't know then was that this decision would change his life. Forever.

Two days later, another hapless woman came to his door. "She told me she had been abandoned by her family. Thankfully, she didn't have any illness."

He let her stay.

A few days later, another lady landed up at his home, begging for shelter.

Though he didn't expect this, Ramamurthy was not surprised.

Tenali -- which is part of Tamil Nadu's beautiful district, Nilgiris -- is a village and word of his kindness had spread quickly.

But his home was not big enough for three new members. So he shifted them to his uncle's home, which was nearby and not occupied.

Over time, more destitute people reached out to him for help.

As the number of people the couple were helping increased, their well-wishers advised them to take permission to run a home. That's when they formed the M N Trust and built a shelter home on a parcel of land they owned.

That 45 cents of land (one cent is 0.01 acres; 100 cents make an acre) was formerly part of a tea estate -- which the Nilgiris are famous for -- in Tenali. "We sold some jewellery and took a loan. My salary helped as well," he says.

Today, the shelter houses 53 elderly people; Ramamurthy, his wife and their five employees live there as well. While they used to look after the leprosy-afflicted, there are no leprosy patients in their shelter now. 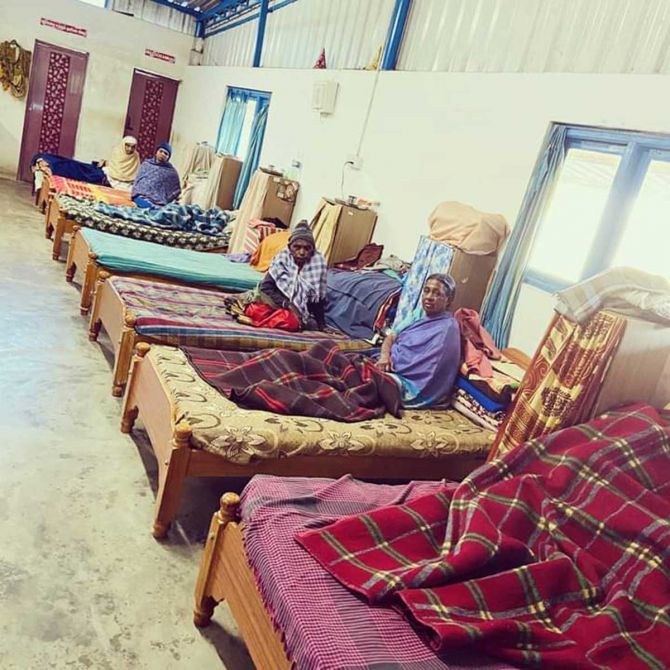 IMAGE: Inside the shelter home.

Ramamurthy's biggest challenge, especially in the initial days, was the health of the residents. As most of them were elderly, they suffered from varied ailments.

"I had to take them to hospital regularly. Some used to faint and we didn't know the reason," he recalls.

Some, he adds, are stubborn and set in their ways. "How do we deal with them?" he laughs. "We maintain a positive approach as we deal with all the problems we face."

Everyday, they spend around Rs 5,000 on food, which is vegetarian. The shelter's monthly expense is around Rs 170,000.

The climate in the Nilgiris, which is a hilly area, is cold for eight months of the year and warm for the remaining four.

To ensure the cold weather doesn't affect their health, hot water is available 24 hours a day. The residents are provided with blankets and sweaters. Each person staying there has their own bed. And they are given hot tea or coffee three times a day.

"This is a shelter home, not an orphanage. The people who stay with us were not born orphans; they have been abandoned," he underlines the difference.

Since they don't have any form of identification on them when they arrive, Ramamurthy has got them registered locally and provided them with Aadhar and voter identity cards.

"It is not easy to get this from the government, but we have managed to do so with the shelter home as their permanent address." 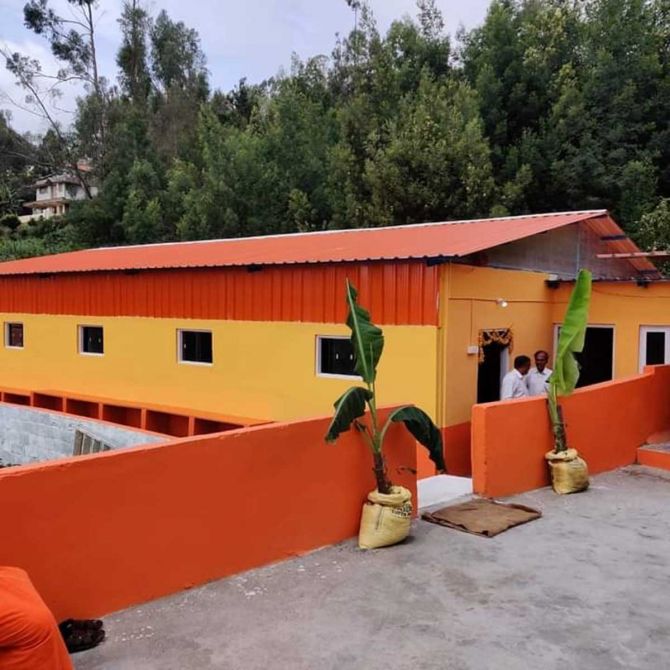 IMAGE: The outside of the shelter home is painted in bright colours.

"At present, we have 15 members who have mental health issues; we found them wandering on the road."

Most of them, he says, don't have close family members though distant relatives sometimes visit. The shelter does not receive, or expect, any financial help from the relatives since most of them are poor.

As to how the trust is funded, Ramamurthy explains, "We have a credit account at the provisions store. I put in Rs 80,000 every month.

Even though the government has granted approval to start the trust, the couple do not get any financial help from the state or the Centre.

Managing during the pandemic was difficult; they pulled through because of the help they received from the locals.

People from their village and the surrounding villages helped them with rice, wheat and other provisions. 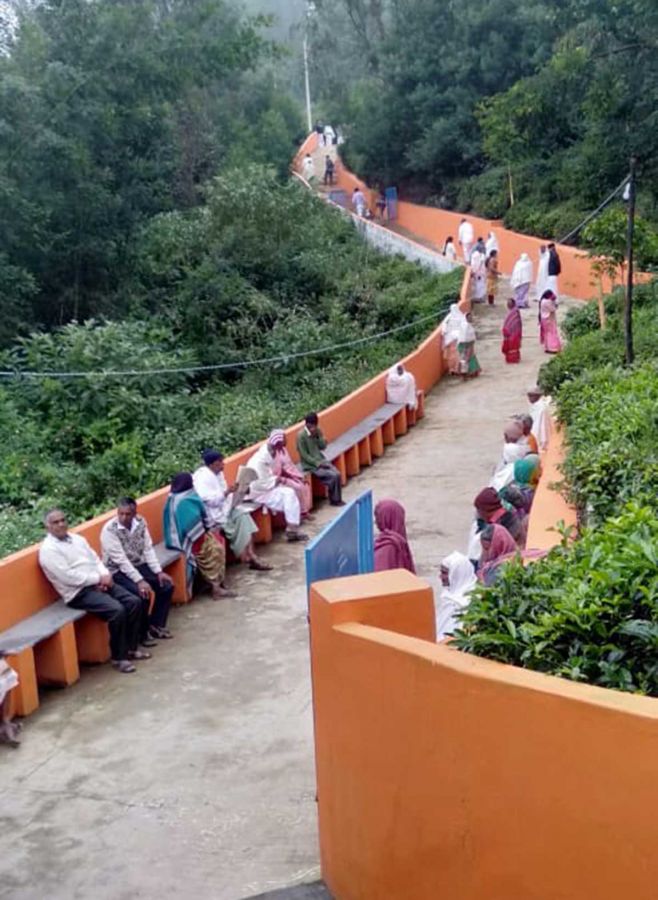 The residents are served tea at 7 am and breakfast -- thrice a week, it's idli; upma or pongal are served on other days -- at 9 am.

Dinner takes place between 7-8 pm. While chapati and bhaji is served on two days, it's fried rice on the other days.

Bath time is scheduled for later in the day -- between 11.30 am and 1 pm -- as most of the residents are elderly and it is quite cold in the morning.

"At present," says Ramamurthy, "there are 25 men and 28 women staying with us." The youngest is 46 years old while the oldest is 96 years old.

The shelter staff take attendance every day and maintain a history of every member in a register. Each member also has their individual medical file.

Temperature, blood pressure and sugar levels of all residents are checked thrice a week.

Doctors visiting the shelter home are paid for their time.

The shelter owns a Maruti Omni van which is used when a resident needs to go to the hospital.

"When someone dies, we conduct their funeral," says Ramamurthy. "We keep their death certificate in our records, but hand it over if a relative asks for it."

School children and NSS volunteers regularly visit the shelter home. "We always tell them that they should look after their parents," smiles Ramamurthy.

As for the future, he has just one desire; that the shelter home will always provide a roof to those who need it. And he is sure his dream will be fulfilled. "We are maintaining the shelter home well," he says, "and both my daughters are committed to it."

Readers have asked how they could help Mr Ramamurthy's shelter home. If you would like to help, you could send your contributions to: 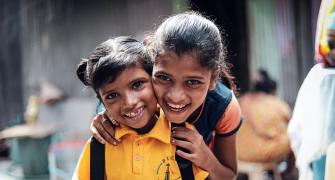 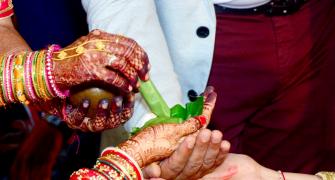 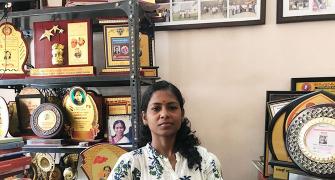 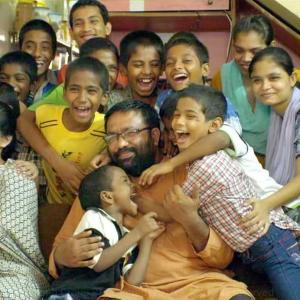 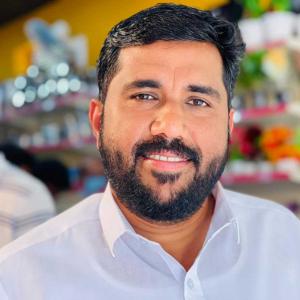