Fifty years ago, India's first prime minister passed into the ages. On his death anniversary, May 27, Lieutenant General Eric A Vas (retd) commenced rediff.com's series to evaluate Jawaharlal Nehru's legacy with a perspective of the premier's relationship with the military.

Talleyrand, the illustrious foreign minister of Napoleon and the Bourbons, prescribed one basic rule for pragmatic foreign policy: by no means show too much zeal. In India's case, gushy expectations, self-deluding hype, and oozing zealousness have blighted foreign policy since Independence, constituting the most enduring aspect of the Nehruvian legacy, other than the hold of the Nehru family dynasty over the Congress party and the continued strength of Indian democracy.

Zeal is to Indian diplomacy what strategy is to major powers. India has rushed to believe what it wanted to believe. Consequently, India is the only known country in modern history to have repeatedly cried betrayal, not by friends but by adversaries in whom it had reposed trust.

Reflecting India's decline in its own eyes, however, while one 'betrayal' in 1962 hastened the death of Jawaharlal Nehru, another in 1999 kept Atal Bihari Vajpayee going as if it did not happen despite his public admission that his 'bus to Lahore got hijacked to Kargil.' It was finally the voters who decided they had had enough of Vajpayee.

Earlier, in 1972, even the strategist Indira Gandhi slipped up at Simla by trusting her opponent's word on Kashmir.

Also Read: The Errors of Simla

The strength of any nation's foreign policy depends on the health of its institutional processes of policy-making, on realistic goals, strategies, and tactics, and on the timely exploitation of opportunities thrown up by external conditions. Indian foreign policy, regrettably, has been characterised by too much ad hocism, risk aversion, andpost facto rationalisations.

Institutional processes are operationally weak and there is no tradition of strategy papers to aid political decision-making. An uncritical media only encourages a political proclivity for off-the-cuff decisions.

In the absence of a set of clear, long-term goals backed by political resolve, Indian foreign policy has not been organised around a distinct strategic doctrine. Without realistic, goal-oriented statecraft, the propensity to act in haste and repent at leisure has run deep in Indian foreign policy ever since Nehru hurriedly took the Kashmir issue to the UN Security Council without realising that the Security Council, as the seat of international power politics, has little room for fair dealing.

From the Rediff Archives: 'Jawaharlal, do you want Kashmir, or do you want to give it away?'

The India-China territorial dispute is another problem bequeathed by Nehru to future generations of Indians. Nehru's first blunder was to shut his eyes to the impending fall of Tibet even when Sardar Patel had repeatedly cautioned him in 1949 that the Chinese Communists would annex that historical buffer as soon as they had installed themselves in power in Beijing. An overconfident Nehru, who ran foreign policy as if it were personal policy, went to the extent of telling Patel by letter that it would be a 'foolish adventure' for the Chinese Communists to try and gobble up Tibet -- a possibility that 'may not arise at all' as it was, he claimed, geographically impracticable!

In 1962, Nehru, however, had to admit he had been living in a fool's paradise. 'We were getting out of touch with reality in the modern world and we were living in an artificial atmosphere of our creation,' he said in a national address after the Chinese aggression.

Nehru had ignored India's military needs despite the Chinese surreptitiously occupying Indian areas on the basis of Tibet's putative historical ties with them and also establishing a land corridor with Pakistan-occupied Kashmir through Aksai Chin. Although Indian military commanders after the 1959 border clashes began saying that they lacked adequate manpower and weapons to fend off the People's Liberation Army, Nehru ordered the creation of forward posts to prevent the loss of further Indian territory without taking the required concomitant steps to beef up Indian military strength, including through arms imports. Nehru had convinced himself grievously that China only intended to carry out further furtive encroachments on Indian territory, not launch a full-fledged major aggression.

In fact, Nehru accepted the Chinese annexation of Tibet in a 1954 agreement without settling the Indo-Tibetan border. While Nehru thought he had bought peace with China by accepting Chinese rule over Tibet on the basis of the five principles of peaceful co-existence, Mao and his team read this as a sign of India's weakness and a licence to encroach on strategically important areas of Ladakh.

So betrayed was Nehru by the 1962 attack that he had this to say on the day the Chinese invaded: 'Perhaps there are not many instances in history where one country has gone out of her way to be friendly and co-operative with the government and people of another country and to plead their cause in the councils of the world, and then that country returns evil for good.'

Four decades after Nehru's death at the age of 74, the Nehruvian legacy in foreign policy continues to influence Indian policy-making. Much before the recent national election made Sonia Gandhi the most powerful political figure in India, the Nehruvian legacy was intact in Vajpayee's foreign policy. In fact, nothing pleased Vajpayee more than to be compared with Nehru.

Nehru and Vajpayee mistook casuistry and word games for statecraft, with the latter addicted to parsing and spinning his words. Both valued speech as a substitute for action or camouflage to concession. Vajpayee's fascination with telling the world about the 'greatness' of Indian culture was his rendering of Nehru's moralistic lectures to the mighty and powerful. Like Nehru, he was so enthralled by his own illusions and desire for international goodwill that he could not deal with ill will from India's implacable adversaries. Even in war, Vajpayee declined -- unlike Lal Bahadur Shastri -- to take the fighting to the aggressor's territory, battling the enemy on the enemy's terms and relying on the United States to midwife a 'victory' in Kargil.

Except for a period under Indira Gandhi, India has found it difficult to kick its 'hug, then repent' proclivity. Take the case of the past decade. The 1990s began flamboyantly with the famous I K Gujral hug of Saddam Hussein and ended spectacularly with Jaswant Singh's hug of the thuggish Taliban, as the then foreign minister chaperoned three freed terrorists to Kandahar. In the midst of the IC-814 hijacking saga, Jaswant Singh fed to the media his hallucinations about driving a wedge between the Taliban and its sponsor, Pakistan.

Also Read: The Hijacking of Flight 814

Until India fully absorbs the fundamentals of international relations, it will continue to get 'evil for good.' The fundamentals include leverage, reciprocity, and negotiating strategies that do not give away the bottom line. For five decades, India has put itself on the defensive by publicly articulating its Kashmir bottom line as the starting line -- turning the LoC into the international border.

Some nations have a built-in craving for revision or hazardous gain, while others want only the status quo. Randall L Schweller, in his brilliant study Deadly Imbalances, labels the revisionist nations 'wolves' and 'jackals', while the status quo states are either 'lambs' or 'lions'. India certainly qualifies as a 'lamb,' surrounded by 'wolf' China and 'jackal' Pakistan. The 'lamb' status is in keeping with its intrinsic disposition and meek objectives. Although its borders have shrunk since Independence and it is a poor state, India is, lamb-like, content with the status quo.

Only a 'lamb' state will make unilateral concessions and deal with invaders and hostage-takers on their terms. Again, only a 'lamb' will accept the outside portrayal of Kashmir as a bilateral dispute between India and Pakistan, condoning the third-party role of China, in occupation of one-fifth of J&K. A 'lamb' state is wary of traditional friends, but wishes to cuddle up to elusive new buddies or even enemies. Its diffidence makes external affirmation and certification important for its policies. A 'lamb' also assumes that others change their beliefs and policies as rapidly as it meanders to a new course.

Earlier in this series:
Lt Gen Eric A Vas: Truly, an extraordinary fellow 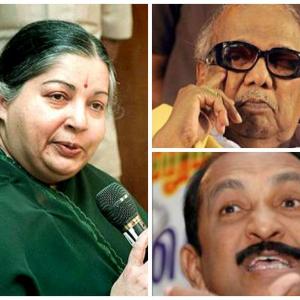 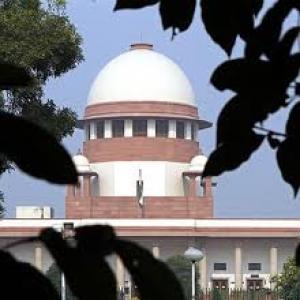