Sheena Bora Trial: The man with the pistol

'He had a carry bag made of plastic. One pistol came out of it. There was also a magazine which had three rounds. And a mobile and a Rs 100 currency note.'
No prizes for guessing who that was...
Vaihayasi Pande Daniel reports from the Sheena Bora murder trial.
Illustration: Uttam Ghosh/Rediff.com 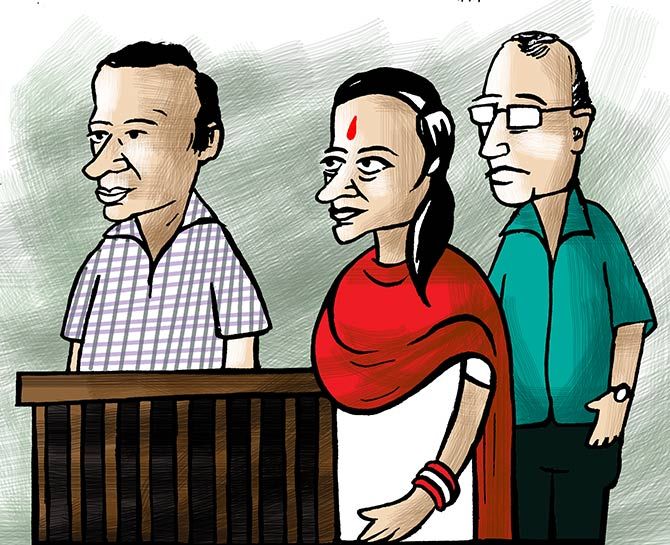 How many Saturdays, since the Sheena Bora murder trial drowsily began, in a start-stop manner, in early February 2017, has there been hearing?

Probably, as far as one can remember, none.

A man who seems to believe: Give Saturday. And you will find Sunday.

The tall, academic-looking Khan, of sombre but kindly demeanour, the owner of thick glasses and a luxuriant moustache, who took over as CBI special prosecutor in early May, is certainly showing himself to be the man of action for this trial.

He, in conjunction with CBI Special Judge Jayendra Chandrasen Jagdale, are really stirring up things.

As a result, the power equations in the courtroom, and in the case, appear to be changing imperceptibly but indisputably.

He had already given his short testimony to the court a day earlier.

Rao, who ran and owned a firm called Dotcom Services India Pvt Ltd had as clients, through a digital contract, INX Global some years ago. This company (the first one has heard of it) was apparently owned and jointly run by Indrani and Peter Mukerjea, in addition to INX Media and INX Services.

Rao was asked in 2015 by a police inspector named Chavan of the Khar police station, north west Mumbai, that was handling the investigation into the murder initially, to retrieve all the e-mail communication belonging to INX Global.

A letter establishing this request was produced in court and subsequently a 90-page document of INX's e-mail exchanges was sent by Rao to the police.

The contents of these e-mails were not the focus of either Rao's testimony or cross-examination.

It was about establishing the authenticity and authority with which he retrieved them. Rao said: "When I sent the letter dated 25th September 2015, I had not sent a certificate under 65B evidence Act. Or any authority letter to retrieve data."

According to a 2018 Supreme Court clarification, that has come five years after the Sheena Bora murder was investigated, Section 65(B) of the Indian Evidence Act declares 'electronic records needs to be certified by a person occupying a responsible official position for being admissible as evidence in any court proceedings'.

The importance of Rao's cross examination, which had been so vigorously argued about the previous day between the lawyers and the judge, seemed to have faded a bit come Saturday.

Indrani's lawyer Gunjan Mangla, conducting the 'cross' in absence of her senior colleague Sudeep Ratnamberdutt Pasbola, finished her examination, with assistance from Peter's lawyer Anoop Pandey, in under half an hour, before this correspondent could even reach the courtroom.

The burning questions of Rao's 'cross' were, I was told, about his interactions with Sameer and Sohail Buddha.

Rao packed up that never-ending mystery with two simple 'No's, although the defence seemed to have refrained, perhaps for strategic reasons, from probing him any further.

But Rao made it clear that there had not been any communication between him and the Buddha brothers, neither Sohail nor Sameer.

Did he know them? That question was never asked.

Sameer Buddha was once an employee of INX Media, handling its technical operation and his brother Suhail, a former Mumbai police officer, had worked at Star India, where Peter had been the CEO. Sameer, the defence had been trying to establish, was alleged to have a connection with Sheena's murder.

Rao, a man in maybe his late 30s, with a gentle, knowledgeable manner, turned out to be something of a tech tycoon.

He had begun, along with his partner Pankaj Ramchandra Jaiswal, two end-to-end Web solutions companies, the first 22 years ago with seed money of just Rs 50,000, as per media reports. Today they were servicing approximately 1,000 clients worldwide, he told the court.

Rao is also the head of operations and technology of an online payments gateway called Aktis. One of his companies received an award for being the most promising Web solutions outfit back in 2009 from the India Leadership Conclave and further appreciation in 2017 as one of the 10 top IT services firms.

He would not disclose the remuneration he received from these companies and the question was deemed irrelevant by the prosecution.

Rao: "We receive requests from the police to provide data whenever any crime takes place. I don't recall any other case where such a request was sought... I informed the other director regarding the summons orally."

Later, he added: "The summons received by police was addressed to the company. I don't recollect if it was sent to Dotcom. It could also have been sent to the other company."

While concluding the cross-examination, the defence declared Rao had no authority to retrieve the said data and that he had provided false data.

True to his word, Khan, in a kind of show of bravura, with the aim of keeping the tempo of the trial fast-moving, brought yet another witness to the stand on Saturday.

Ashok Yadav -- a driver, who said he worked for an Andheri, north west Mumbai, dentist named Sanjay Thakkar was diffident and nervous in the witness box.

Wearing a white short-sleeved shirt, its tails hanging out, and jeans, Yadav lived in Mira Road, a township further north west of Andheri.

Yadav was yet another panch (the witness of a police panchnama or record of observation).

On August 21, 2015, Yadav was -- coincidentally, providentially, luckily, conveniently, fortunately, fortuitously, accidentally, serendipitously; is there any other Luck By Chance kind of word that one has not yet used for the inimitable Khar police panchas, -- standing/loitering along north west Mumbai's sea promenade Carter road, Khar, when he was summoned by constables/officers belonging to the Khar police station.

He was told they planned to conduct a body search of another man walking along the promenade and required Yadav to be a witness.

Yadav recalled in Hindi in his testimony: "He had a carry bag made of plastic. One pistol came out of it. There was also a magazine which had three rounds. And a mobile and a Rs 100 currency note."

No prizes for guessing who that was... (Answer a few paras down.)

All of this material, Yadav remembered, was sealed by the police.

Khan checked with Yadav: "Seal kiya, sign liya? (It was sealed and you signed?)"

The senior prosecutor turned Yadav over to Mangla for cross-examination. She had a few preliminary questions about where he worked. He had been working for Dr Thakkar for eight or nine years and before that at a garage.

She then queried him about his wife Renu's name and his children.

Judge Jagdale, suddenly irritated, cut her off abruptly, maybe worried about wasting time. Annoyed, he enquired of young Mangla how these questions were relevant to be asked of a man who was merely acting as a panch in the case.

Slightly flustered, Mangla attempted to defend her line of questioning, but then instead soldiered on, checking with Yadav about his duty hours, before closing her 'cross' with an open-ended question to Yadav, that he had never been at Carter road that day in August 2015, when the police nabbed the Mukerjeas's driver Shyamvar Pinturam Rai, Accused No 3 and approver in this case.

Niranjan Mundargi, the lawyer representing Sanjeev Khanna, Accused No 2, began his examination of Yadav with a few queries before he critically queried: "Yadavji, pistol ko kabhi handle kiya hai? (Yadavji, have you ever handled a pistol before?)"

Yadav shook his head in a dismal way, his face glum.

Yadav again offered a desultory shake of his head.

Mundargi, his face beaming with a kind of lively curiosity he displays when he knows he is onto a good line of questioning, then speculated aloud if Yadav knew the difference between a magazine and a round (of ammunition).

Yadav then lit up like a CF light bulb, eager to share what he knew or else happy that he had one solid answer for the defence. Knowledgeably, he propounded: "Magazine bahar nikalta hai (A magazine comes out)."

Yadav's answer tickled Judge Jagdale, who commented with a giant grin that the witness had mentioned a magazine in his testimony, but that he was subsequently explaining what kind of magazine it was.

Mundargi proceeded to put a few more questions to Yadav about the distance at which Yadav was standing and what he was doing exactly.

Judge Jagdale lost his patience once more and chided Mundargi in a gentle tone, smiling: "You are a senior lawyer. The defence should know what kind of questions to ask?"

Perhaps taking it as signal, Mundargi quickly wound up his interrogation too.

Mangla asked Khan when they would be bringing "Mr Mukerjea" to court and gingerly mentioned to the judge that they would need first some time to prepare and two weeks to question him.

She was referring to Rahul Mukerjea.

The judge, taking up for Mangla, told Khan that he needed to pencil in at least ten days for Rahul Mukerjea's examination by the defence.

Khan to Mangla in a pacifying tone: "Hum aapko batainge (I will tell you). Don't get bothered."

Indrani and Sanjeev came forward to meet their advocates.

Sanjeev, dressed in a bright turquoise shirt and dark slacks, also took the stand to yet again request the judge to grant him permission for a chair in his cell at Arthur Road jail, central Mumbai.

"I want one chair for myself to sit on during the day."

Hampered by spine issues, Sanjeev finds it difficult to sit on the floor all day in his anda cell that he now shares with three others. "Either I am alone in that cell or it will be an odd number of us there," he commented later amusedly.

The judge said he didn't want to countermand the orders of the jailers. Sanjeev persisted, clarifying that he had been told by the jailers that only the judge could grant him a chair and prisoners in cells in the same block had chairs. As did Peter.

Judge Jagdale was not entirely convinced. He said he had not seen any chairs when he visited the jail on his rounds. And declared that Peter had a chair now for a good reason.

Sanjeev contradicted that: "Peter has had a chair for the past two years. Your predecessor gave him one."

Taken aback, but smiling, the judge queried what Sanjeev meant and then promised to check if he could get Sanjeev a chair finally.

Peter has still not resumed his trips to court, after his bypass surgery in late March. According to his lawyers he is recovering well, but will return only after his cardiologists give him the green signal.

Indrani, looking very much like a girl from Guwahati, even if she is heading towards the wrong side of 50, was in her Saturday festive best, as if she was off to a picnic -- a white and red kurta and a bright red chunni, her hair done with a side parting, in an attractive sideways pony tail. White and red bangles jingled on her wrists. A big red tikka was planted on her forehead.

A Saturday hearing was no doubt an unexpected outing for the accused.

If Ejaz Khan keeps this spanking pace, the accused will have many more trips to court each week and more opportunities to eat special food they have missed. Swap books. Or meet dear friends or relatives. 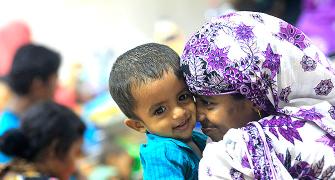 '700 children die of diarrhoea or pneumonia every day' 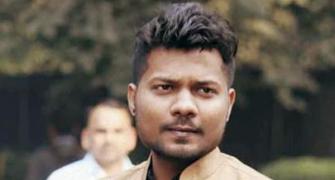 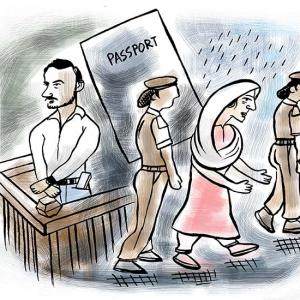 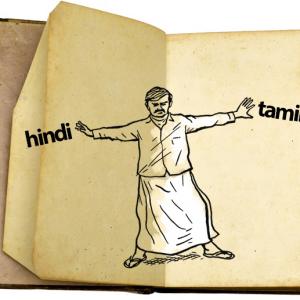