From loudspeakers to helicopters, poll businesses is booming

The EC limits campaign expenses incurred by a candidate to Rs 50 lakh to Rs 70 lakh.
But there is no such limit on spending for parties.
The vendors aren't complaining.
Ritwik Sharma and Dhruv Munjal report. 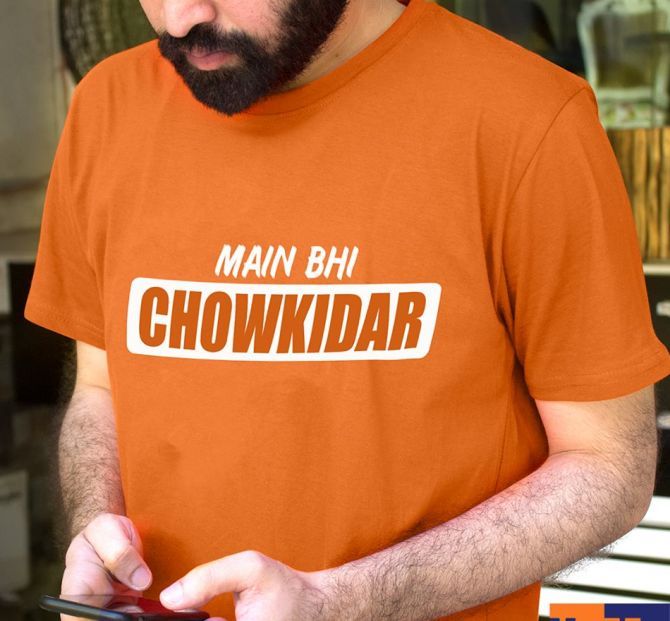 Far from the hurly-burly of election campaigning that is the source of his bread and butter, Gulshan Khurana leans back on a leather chair and stares into his smartphone at his tiny office in New Delhi's Sadar Bazar.

A TV set and pictures of Khurana and his daughter posing with political bigwigs separate the mounds of display material.

This is a hectic time for Khurana, who is among the dozens of suppliers of election campaign material in what is one of Asia's largest wholesale markets. 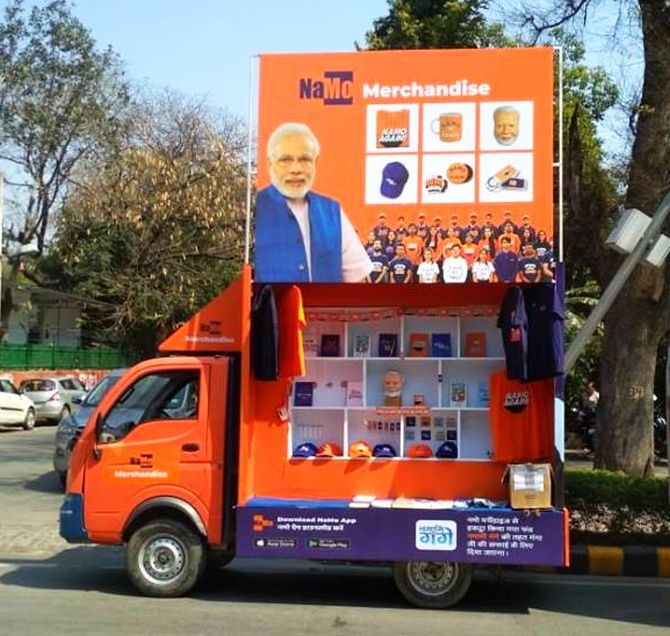 His shop, Krishna Printers, has been in business since the 1950s. Back then, his father sold tin badges to politicians.

In this election season, he reckons, vendors like him would easily surpass the Rs 200 crore business they did five years ago.

Khurana is part of a subcontracting economy; he buys the material from factories and sells it to political parties.

He is also a senior member of a lobby group that has fought off Election Commission guidelines that tried to curb the use of campaign material -- a trade of cheap items that relies on high volumes. 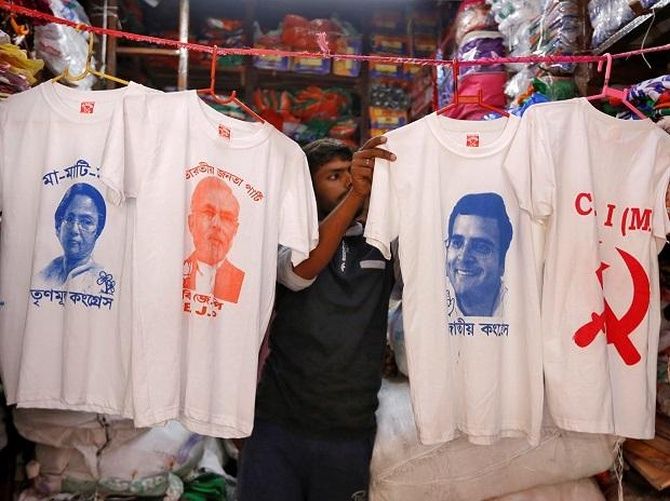 As India votes in what could well be the world's costliest election -- the Centre for Media Studies estimates it to be a Rs 50,000 crore ($7 billion) affair -- an opaque system riding on money power has thrown up opportunities for a range of businesses: from those supplying campaign material, tents and mics to those selling or renting out armoured vehicles and helicopters to political parties.

The scene outside the Bharatiya Janata Party headquarters on Ashoka Road in Delhi offers a tiny peek into this unorganised but thriving economy.

Around midday on April 11, the first day of polling, 22-year-old Shah Rukh -- he goes only by his first name -- announces enthusiastically: "Modi will come back." 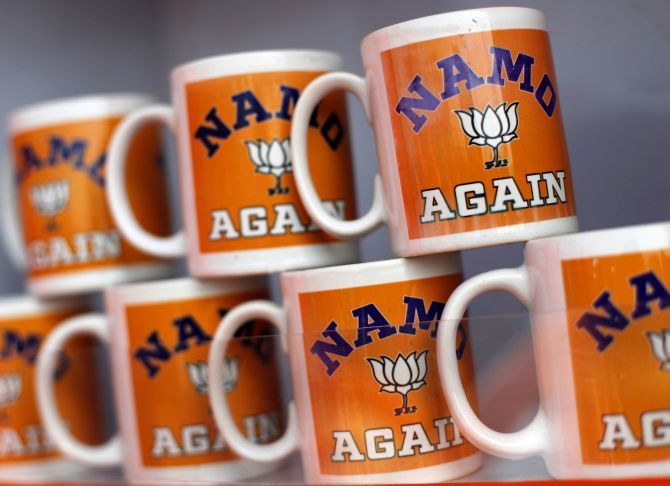 Shah Rukh and his subordinate, Shankar, are in charge of a mini-truck selling official NaMo merchandise across the street from the BJP office.

A cutout of Prime Minister Narendra Damodardas Modi keeps vigil from the top. 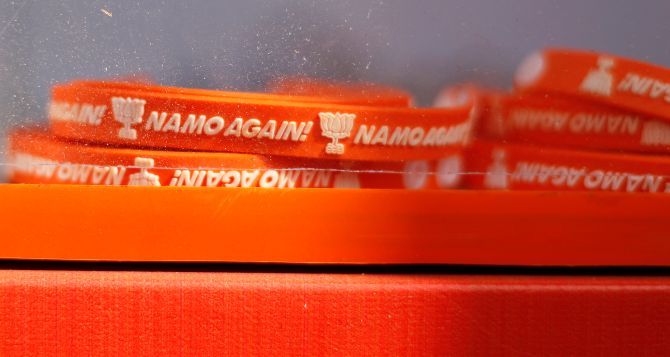 Business has been brisk since the duo set up shop over a month ago, with sales touching Rs 5,000 on average days and Rs 10,000 on good days -- impressive returns considering that the most expensive item is a T-shirt worth Rs 300.

Modi personally endorsed the merchandise on Twitter last month, a move for which he faced widespread flak on social media.

Expectedly, the Main Bhi Chowkidar tee is a rage; the NaMo Again cap is another bestseller.

There are four other such mini-trucks vending BJP merchandise across the capital.

The proceeds from sales, it is claimed, will go to the Namami Gange Programme, a central government conservation project for the rejuvenation of the Ganga. 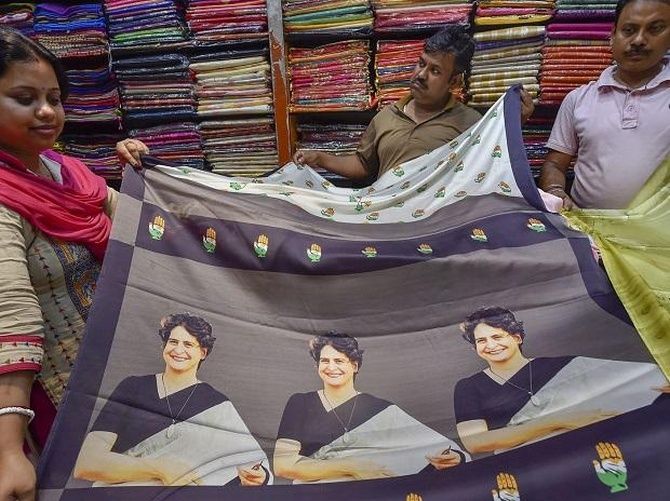 Over at the Congress headquarters, Lokesh Guraiya has seen his share of electoral battles.

For 20 years, Guraiya, 35, has been selling merchandise outside the party's office at 24 Akbar Road.

At Guraiya's pavement store, which has a variety of promotional goods spread across a white sheet, Priyanka Gandhi Vadra is a clear favourite among merchandise seekers.

At Rs 100, a sash with her beaming face plastered on it is the costliest item on offer. 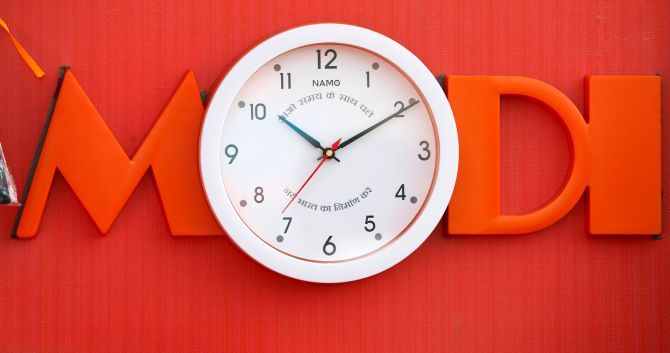 IMAGE: What time is it? According to this one, it's time for NaMo again.... According to reports, funds from the sale of the merchandise would be used for cleaning the Ganga. Photograph: Adnan Abidi/Reuters

"When the tickets were being distributed, a lot of politicians used to stop by and buy sashes in bulk -- plain ones are available for as little as Rs 8," says Guraiya.

Sales were rocketing till last month, when Guraiya was comfortably doing business worth Rs 2,000 every day.

For aspiring politicians seeking essential election material, his is a one-stop shop -- he even sells khadi at Rs 200 a metre. 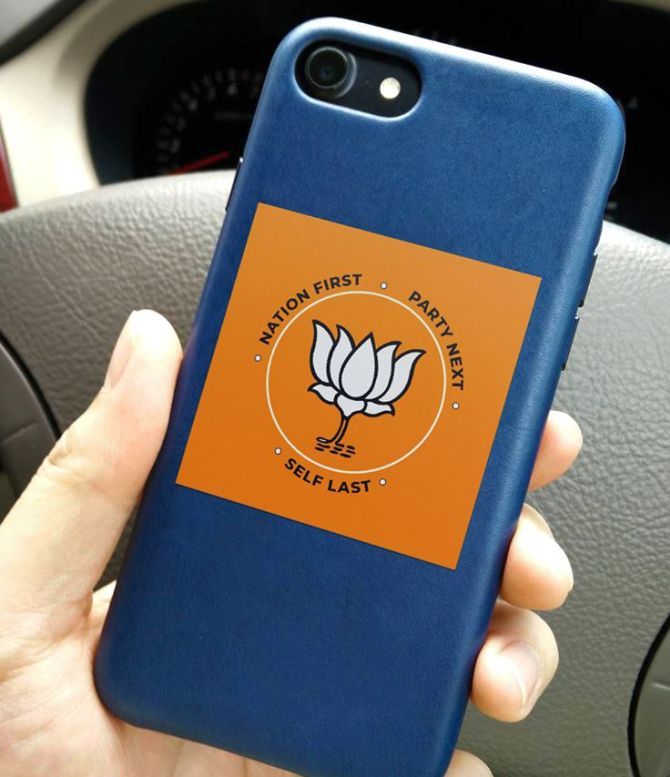 The festival of democracy is a profitable time for tent-wallahs too, says BJP leader Sudhanshu Mittal, who runs a family tent business.

From staging conventions for various political parties, his company, Delhi Tent and Decorators, has moved on to putting up infrastructure at the counting centres and polling booths, at Modi's rallies and at big-ticket events such as the recently concluded Kumbh Mela.

Mittal claims that medium and small businesses could witness up to a 100 per cent jump in revenue during the general election.

Yograj Bagga, 64, who provides tents and the accompanying paraphernalia including tables, chairs, acoustics and lighting on rent, is expecting 10 to 15 such orders during this election. 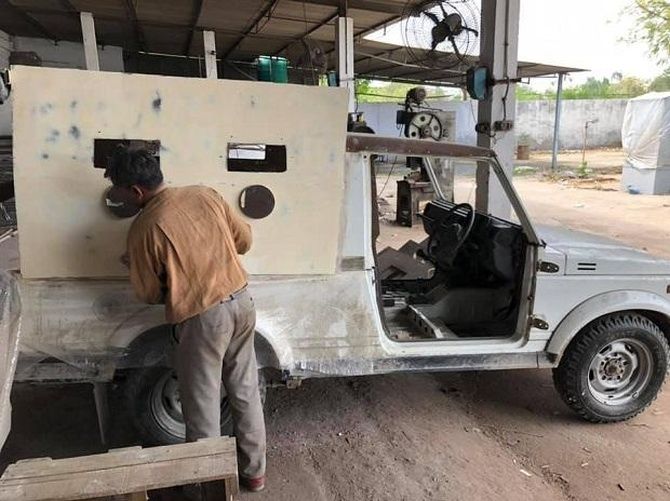 Another important cog in this giant wheel is the audio contractor.

Days before Modi's rally in Dehradun earlier in April, the city's Parade Ground was given a makeover.

Among the embellishments were more than 500 speakers and a handful of sound boxes.

The audio contract was given out to Lucknow-based Tayal Sound, a veteran of sorts when it comes to supplying acoustics for election rallies -- its reliability dates back to the days of Indira Gandhi.

Given the high security, preparation for Modi's address was tougher than usual, says Nirmal Agarwal, who handles the Uttarakhand operations for the company.

"We spent almost three days setting up the equipment. We had to work with the SPG (Special Protection Group) and many security drills had to be followed."

The acoustics employed were state-of-the-art; the microphone on the dais alone ran into a couple of lakh rupees.

Interestingly, Tayal Sound was once a fixture at all of Mayawati's rallies.

Since 2014, however, when it bagged a contract for Modi's debut rally in Ranchi, it has become a regular feature at most BJP events in the region.

Its presence, though, cuts across party lines: it was Tayal Sound that did the acoustics at Rahul Gandhi's Dehradun rally last month.

While Agarwal refuses to disclose figures, one rally is estimated to cost a party Rs 10 lakh to Rs 15 lakh. 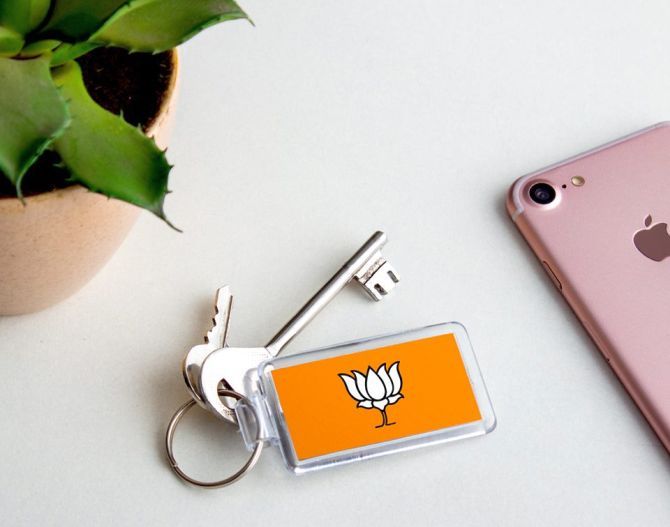 Campaigning during election time, after all, calls for special security measures -- last fortnight, a BJP MLA in Chhattisgarh was killed when an improvised explosive device ripped through his convoy.

This election season has been particularly busy for Sobti, whose Laggar Industries has been supplying armoured vehicles for nearly three decades.

Orders for customisation started piling up as early as the middle of last year. "The run-up to campaigning is the most hectic for us. We've customised more than 200 vehicles in the last eight months. We just have five or so more to go," says Sobti.

The level of ballistic sophistication varies, he explains. Some like to go for just the basics -- bullet-proof glass with blast-resistant doors -- while others opt for roof protection and advanced features such as explosive-resistant fuel tanks.

In rare cases, Sobti has even fitted cars with a mine protection system, the kind that armed forces use in highly militarised zones. 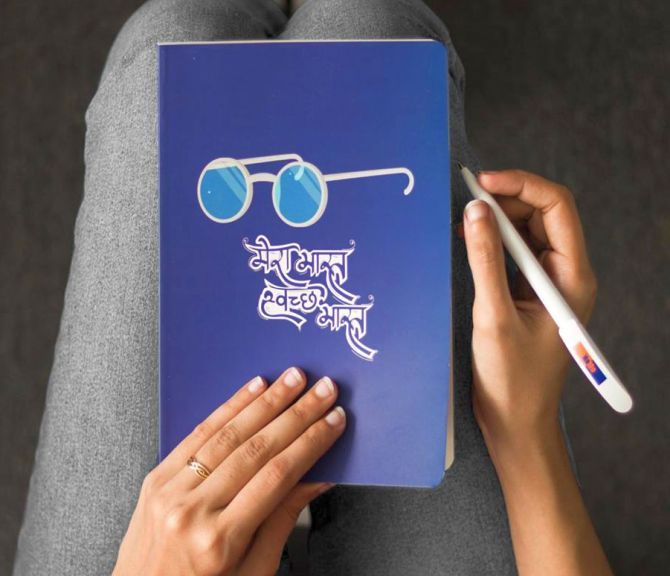 Sobti, whose father first started supplying armoured cars to local politicians during the days of insurgency in Punjab in the mid-1980s, understands the enormity of what's at stake.

Precision is key at his workshop, with one vehicle sometimes taking as many as three months to get battle-ready. "It's a long process that requires a lot of elements to come together. We can't take chances," he says.

Sobti's customer base has expanded to big builders and businessman in recent years -- he is almost never out of work.

The cost of protecting the vehicle from gun fire, grenades and shrapnel can be steep.

A fairly rudimentary safety pack for the car at Laggar comes with a price tag of Rs 700,000. With some vehicles, it can go up to Rs 60 lakh.

Without getting into the specifics, Sobti says orders have been trickling in from political parties across the state. "Even with police protection available, people want to be doubly sure," he says. 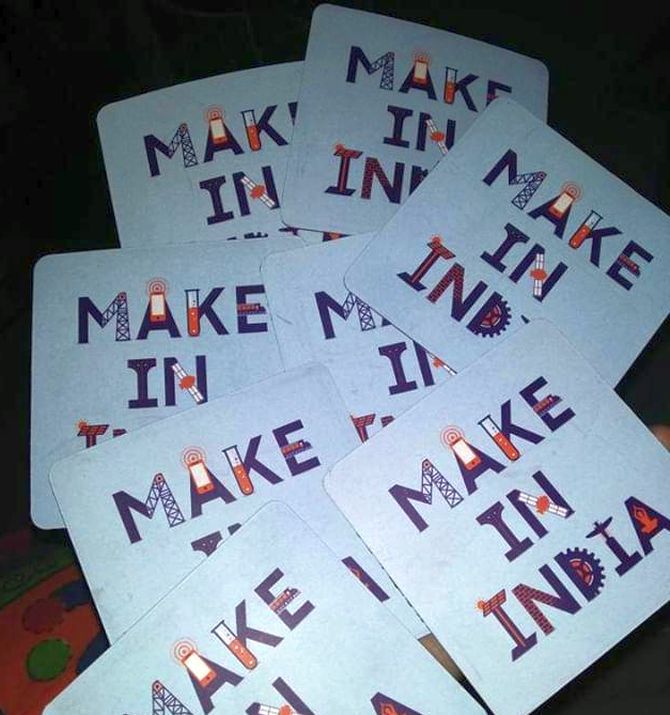 Both industrialists and politicians own aviation companies that rent out these choppers and chartered planes.

According to reports, the number of civilian helicopters with charter companies is well below 100, which isn't commensurate with their growing demand.

This election season, the allegation from Opposition parties is that the BJP has booked most of them, leaving very few for the others.

Ashish Bhushan, who retired as squadron leader from the air force and runs an aviation and charter company, says, "Political parties are very good paymasters. They pay in advance unlike regular clients. It also helps that their schedules are confirmed."

With rates and utilisation up during elections, charter companies catering to political activity see a sizeable increase in revenue.

"Parties typically commit to fly the machine -- chopper or jet -- exclusively for a couple of months. In normal circumstances, people seek 40 to 50 hours of fly time a month, but during election time parties look for up to 90, 100 or even 120 hours," adds Bhushan, who does not want to reveal the name of his company.

High-end chopper rates can exceed Rs 300,000 an hour, and carriers on average clock up to 75 hours a month for parties, says Bhushan.

The EC limits campaign expenses incurred by a candidate to Rs 50 lakh to Rs 70 lakh, depending on the state one is contesting from.

But there is no such limit on spending for parties. The vendors aren't complaining. 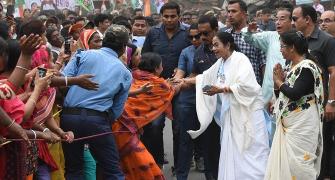 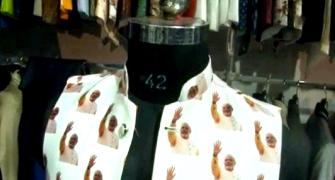 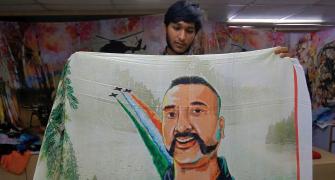 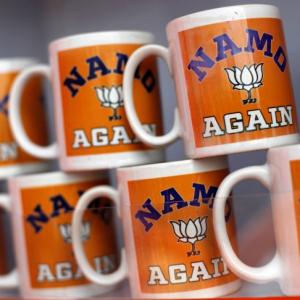 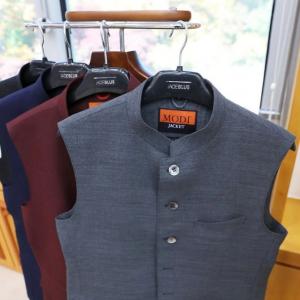