'They are our go-to men, our trouble-shooters.'
'They draw their strength from remaining low-key and accessible only to our workers.' 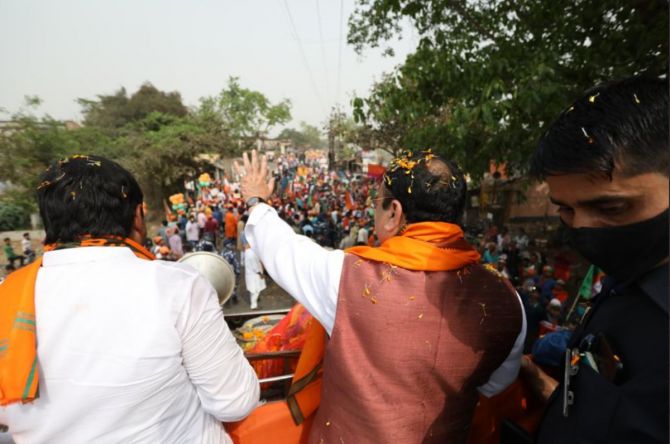 The canvas is also peopled with individuals who, unbeknown to those outside the BJP, pull the strings. "They are our go-to men, our trouble-shooters. They draw their strength from remaining low-key and accessible only to our workers," a source said.

The movers and shakers span a range of responsibilities: From keeping the organisation in ship-shape and plugging the loopholes, to catching out Mamata when she "trips up" and working on the TMC's "rebels" and "fence-sitters".

Barring exceptions, the "go-to" men are rooted in the Rashtriya Swayamsevak Sangh and its student front, the Akhil Bharatiya Vidyarthi Parishad, and have since moved to the BJP organisation. Shishir Bajoria, an industrialist who was in the CPI-M, is an outlier to make it to the state BJP's inner circle.

Who are these silent operators? Among the significant ones are:

Arvind Menon: Guruvayur-born Menon is Vijayvargiya's back-up person who was put to test in West Bengal in the 2019 Lok Sabha polls by Amit Anilchandra Shah, the then BJP president.

Menon travelled without security and was allegedly attacked by TMC workers a few times, including once at a Siliguri hotel where he was addressing BJP workers. Central security forces reportedly moved him to safety.

Menon remained so low profile that he didn't open a social media account until recently and did not prefix 'Chowkidar' before his name, unlike his BJP peers, for fear of drawing the TMC's attention.

Menon, who speaks Bangla fluently because of an earlier stint in West Bengal, spent his time in villages before the last Lok Sabha polls, and stayed at the homes of BJP sympathisers to create rural networks. His 'silent' operation was codenamed 'Chup chaap, Kamal chaap (vote the lotus without making a noise)'.

Among Menon's purported 'achievements' was enlisting CPI-M workers to augment the BJP's workforce. He is currently a national secretary, a post he worked hard for, because in the years he spent in Madhya Pradesh as organisational general secretary, he was identified with Chief Minister Shivraj Singh Chouhan. In 2016, Shah moved him to Delhi.

Shiv Prakash: The joint general secretary (organisation), who hails from Thakurdwara (Moradabad district), is an RSS pracharak who was 'loaned' to the BJP in 2014 before the Lok Sabha election.

Prakash was a pranth pracharak of Uttarakhand from 1986 to 2000 when the hill districts were still part of UP and later kshetra pracharak of west UP.

In 2014, Shah assigned him the charge of west UP which the BJP swept in successive elections.

In West Bengal, Prakash was mandated to set up committees at 78,000 original booths (the numbers are up because of the pandemic) which he has reportedly carried out.

Although J P Nadda, BJP president, asked Prakash to mind a cluster of states that included West Bengal, he is grounded in the eastern state for the past several months.

Sunil Bansal: A Shah favourite since 2014. A former organisational secretary of the ABVP, Bansal, who hails from Rajasthan, caught the leadership's attention when he convened a 'youth against corruption' movement in 2010.

As UP prabhari (minder) before the 2014 polls, Bansal reached out to influencers in villages, expanded the BJP's booth presence, and mobilised support among the backward castes, the most backward castes, and the Dalits.

Bansal's three-pronged strategy is the cornerstone of the BJP's West Bengal blueprint, as well.

Pradip Joshi: Since 2015, the RSS office on Kolkata's Beadan Street is as much a hub of political activity as the BJP's on College Square. Joshi, a pracharak, was assigned the charge of West Bengal during the RSS' Akhil Bharatiya Pratinidhi Sabha at Nagpur in 2014.

Joshi has kept an X-ray eye on the BJP because unlike other states where the RSS works from behind-the-scenes for its political progeny, it is more upfront about its involvement in West Bengal, where it based itself before 1947. Joshi was earlier the Sangh's pranth pracharak of Arunachal Pradesh.

Amitava Chakraborty: He was the major beneficiary when the state BJP organisation was shuffled in October 2020. Chakraborty replaced Subrata Chattopadhayay as general secretary (organisation), a coveted post in the BJP.

The decision was interpreted as a way of clipping the wings of state party president Dilip Ghosh, who Chattopadhayay was close to.

A graduate from Balurghat College in South Dinajpur, Chakraborty moved to Kolkata in 1990. After doing a spell as an RSS pracharak, he was inducted into the ABVP.

In 2000, he organised the ABVP's first major demonstration on Bankim Chatterjee Street, opposite the Sanskrit College, where the assemblage raised Vande Mataram and Bharat Mata ki Jai slogans in a big way for the first time in Kolkata.

Chakraborty came into the BJP in 2016. He reportedly 'worked hard' to propagate the Centre's welfare schemes among the urban and rural poor and played a role in crafting the BJP's Sonar Bangla campaign theme.

Anirban Ganguly: Director of the Syama Prasad Mookerjee Research Foundation, a BJP think-tank in Delhi. An alumnus of Puducherry's Sri Aurobindo Ashram International Centre of Education and Jadavpur University, Ganguly canvassed support in the town hall meetings in cities and towns beyond Kolkata. 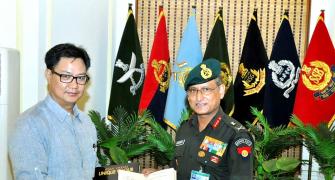 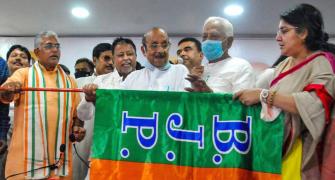 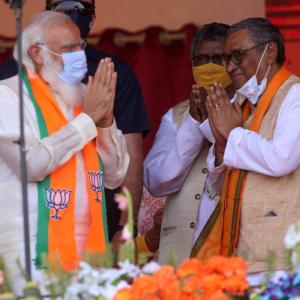