News
Business
Movies
Sports
Cricket
Get Ahead
Money Tips
Shopping
Sign in  |  Create a Rediffmail account
Rediff.com  » News » 'The hope left for justice for my father gets crushed' On Thursday, June 17, one more prisoner ended up being deprived of a proper hearing thanks to the pandemic and lockdown that has been in force intermittently since March 2020.

The fourth application for suspension of the life sentence awarded in 2017 to former journalist and activist Prashant Rahi was adjourned by the Nagpur bench of the Bombay high court on Thursday, this time by four weeks.

Suspension of sentence involves making a prima facie case against a conviction, based on which the court can release the convict on certain conditions.

The last two times Rahi's suspension of sentence application has come up, the lockdown has been on. As on those occasions, this time too, the court felt that the matter required a physical hearing.

When senior advocate Nitya Ramakrishnan pointed out that Rahi, aged 62, had been in jail for five years and at least bail should be given, the court felt that even a plea for bail would require a physical hearing since voluminous records would be needed to be examined.

Prashant Rahi was convicted under the UAPA in March 2017 along with five others, including Delhi University Professor G N Saibaba, for links with the banned organisation CPI-Maoist.

Five of the six accused in the case were sentenced to life imprisonment. The sixth, Vijay Tirki, was sentenced to 10 years.

Rahi is currently in Amravati jail.

Nitya Ramakrishnan had also argued the first application for suspension of sentence in January 2018 for Rahi and Vijay Tirki. The Nagpur bench had, however, rejected it.

In appeal against this, Vijay Tirki approached the Supreme Court, which granted him a suspension of sentence in September 2019.

Since the prosecution had said the roles of both Rahi and Vijay Tirki were similar, Rahi moved the Nagpur court once again on grounds of parity. But the court rejected the parity argument.

Thereafter, his application for suspension of sentence was twice postponed because the lockdown had started and the court felt the lengthy arguments needed a physical hearing.

Ironically, the original defence lawyer in the trial, Surendra Gadling, is now in Taloja jail, accused in the Bhima Koregaon case 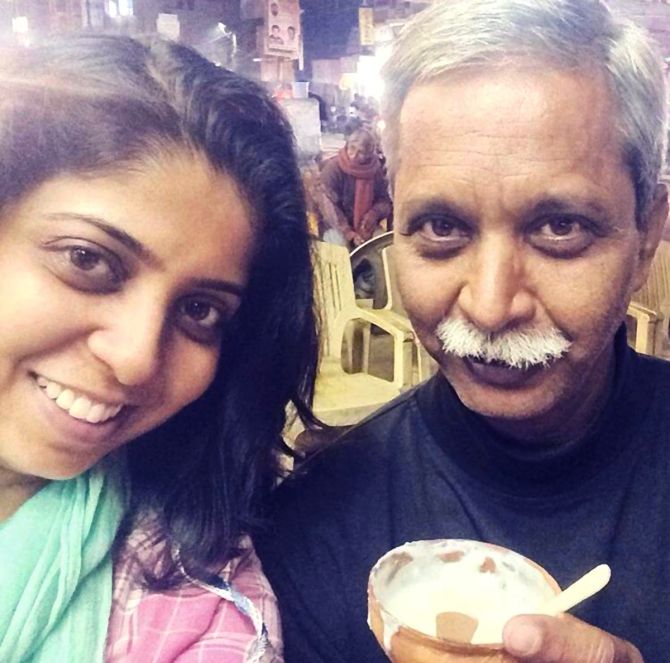 IMAGE: During happier times: Shikha Rahi with her father Prashant Rahi during his time out on bail in 2015-2016.

Maharashtra-born Prashant Rahi has had a chequered life. An M Tech from IIT BHU, he got involved in student causes soon after graduation, and in the mid-1990s, joined the movement for a separate Uttarakhand.

Around the same time, he became a journalist, first with the Himachal Times and then The Statesman.

In 2001, a year after the state of Uttarakhand was founded, Rahi, feeling that he was at a dead-end as a correspondent, and also unwilling to be circumscribed by the demands of journalism, plunged into the mass agitation against the Tehri dam.

By 2005, the leaders of the movement began to be branded as Maoists; in 2007, Rahi was arrested. He spent four years in jail, facing torture and solitary confinement, till granted bail in 2011.

The trial in that case is not yet over.

Fluent in Hindi and English, Rahi has translated books on Lokmanya Tilak, a book on economics for children, and one on medicine.

After his release on bail, Rahi helped political prisoners get legal aid. But in September 2013, barely two years after his release, Rahi was arrested again by the Gadchiroli police n a different case, for alleged links with Maoists.

Interestingly, even in this case, despite UAPA being applied, he was granted bail in August 2014 by the Nagpur bench of the Bombay high court. The court doubted the police's claim of seizure of 'Maoist documents' from Rahi. These documents also did not bear the signature of the panch witnesses.

Strangely enough, these same 'Maoist documents' were cited to deny Rahi a suspension of sentence on grounds of parity with co-accused Vijay Tirki in 2019.

In another anomaly, when Rahi and Tirki's first applications for suspension of sentence were being heard in 2018, the court specifically asked the public prosecutor for any finding by the Gadchiroli sessions sourt of their involvement in any terrorist activity.

Yet, despite the public prosecutor saying 'No', and the court recording that 'they could not bring to our notice any remote finding by the sessions court to indicate the involvement of the accused in the "Terrorist Act" as defined under sec 15 of UAPA,' the high court refused to grant their plea for suspension of sentence.

Rahi has now spent a total of five years in jail for a case in which he has been convicted despite the shaky evidence against him. His lawyers have pointed out to the court the material contradictions in the testimony of the two policemen who said they had detained him; and the failure of the prosecution to prove that he was part of any conspiracy. 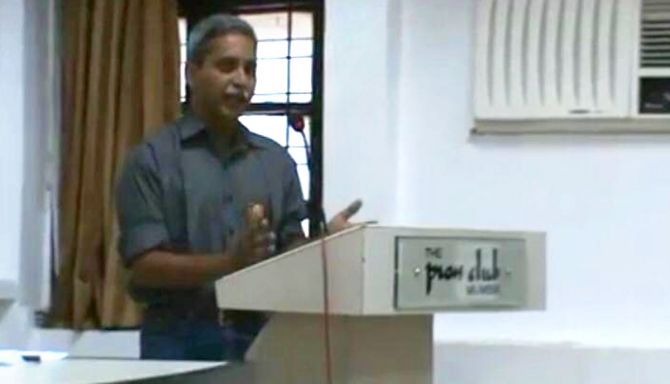 During his first stint of imprisonment in the Uttarakhand case, Prashant Rahi's daughter Shikha, a film-maker in Mumbai, campaigned fiercely for his release, even going to Uttarakhand to hold press conferences.

The support she garnered for him was so widespread that Rahi told this reporter (external link) in an interview in 2011, that policemen newly assigned to his case began to ask him if he was 'Shikha Rahi's father'.

Today, Shikha is once again conducting a campaign for her father's release. She was "hoping against hope" that Thursday's hearing would see her father out at last.

Disappointed, Shikha said, "These repeated adjournments, basically denying liberty without hearing us, don't surprise me any more. But each time, bit by bit, the little hope left for justice for my father, to get him out of that solitary confinement where has spent more than 5 years without being involved in any criminal activity, gets crushed."