'KRN's journey from a humble cottage in Uzhavoor to Rashtrapati Bhavan in New Delhi was no less spectacular than that of Abraham Lincoln from the log cabin to the White House,' notes Ambassador T P Sreenivasan. A hundred years ago, nobody had a birth certificate, particularly in a small village in Kerala.

An uncle or another relative who took the child to the school would give a date based on guess work and that became the official birthday, with decisive implications for the future.

That is what happened to young K R Narayanan (KRN) when his uncle gave his birthday as October 27, 1920.

Some documents show his birthday as February 4, 1921, but his official birthday is today.

On this day a hundred years ago began the twists and turns in his life which took him from a humble cottage in Kerala to the Presidential palace in Delhi.

He became a true symbol of the social change of the last century.

KRN's life was a saga of surprises.

At times, denial of justice turned into blessings for him, at other times, his merit was recognised in unconventional ways.

If he was appointed as a teacher at the University College in keeping with the tradition of such an honour accorded to the Masters rank holders, if he had remained a journalist, if he had not become a student of Harold Laski, who recommended him to Pandit Nehru, if he was not posted to Rangoon, where he met his partner, if he was not posted to Beijing and Washington at crucial times, and if he had not entered politics after a successful diplomatic career, his life and history of India would have been different.

Gandhiji's dream of a Dalit as the Head of State may not have come true.

KRN was a legend at the University College in then Trivandrum even when he was a student there.

Later, stories about his extraordinary brilliance and his career, which broke many barriers, were heard in the corridors of his alma mater.

I had a clear sense of his accomplishments, once I joined the Foreign Service and served in some of the places of his postings like Yangon, Tokyo and Washington.

It was when I met him in 1980 in the United States that the man, rather than the legend, came alive in my consciousness and I encountered his intellectual brilliance, his Nehruvian vision and his extreme humility. KRN's centenary coincides with a major turn in India-China relations.

He was the one, who was chosen to re-establish ambassadorial relations with China after 1962.

We owe it to him that he laid the foundations of India's new relationship with China.

The deterioration of relations with China will pain him, but his efforts to improve relations with the United States have borne fruit as we celebrate his centenary. In Washington, at the time of the Soviet occupation of Afghanistan, he worked hard to convince his hosts that India was opposed to the presence of foreign forces in any country and sought correctives in our own statements to help him fortify that position.

He was naturally outraged when the United States stopped the supply of fuel to Tarapur on the ground that all the nuclear installations in India were not under safeguards.

In an uncharacteristically harsh statement, he pointed out that the United States had the right only to insist on placing Tarapur under safeguards, not the other installations.

Like in human relationships, a contract with one does not apply to others similarly placed, he said. IMAGE: President Narayanan alongside his newly-elected successor A P J Abdul Kalam during a farewell party at Rashtrapati Bhavan, July 24, 2002. Photograph: B Mathur/Reuters

KRN's sense of humour was earthy, but subtle.

I recall his conversation with a senior colleague, who wondered whether greying or balding was preferable as one grew old.

"One consolation is that one can't do both at the same time," the greying Narayanan told his balding friend.

Once at the Massachusetts Institute of Technology, the mike failed when he rose to speak.

He told the audience that if this had happened in Uzhavoor (his native village), 'Third World' technology would have been blamed.

Here it was just a systemic failure! My mother visited Rashtrapati Bhavan to witness an Arjuna Award ceremony as my daughter-in-law Roopa Unnikrishnan was among the recipients.

My brother T P Seetharam was the President's press secretary.

In a short chat, KRN asked my mother where she lived. IMAGE: President Narayanan accepts the Appeal of Conscience World Statesman Award from Rabbi Arthur Schneier, president of the Appeal of Conscience Foundation, and M Douglas Ivester, left, chairman of the board of The Coca-Cola Company, April 28 1998 in New York City.
President Narayanan received the award for his accomplishments as a statesman, author and diplomat. Photograph: Reuters

The Appeal of Conscience Foundation chose to recognise KRN as the World Statesman of 1998.

When we discovered that the Foundation was using the dinner in his honour to raise funds, we decided to alert the President.

I asked my brother to gently broach the subject and seek his reaction.

"Well, we have to accept American ways. It was a hundred dollars per plate when Panditji went there. It must be a thousand dollars now," he said, much to our relief.

KRN was a nationalist and an internationalist, but he did not erase his Kerala identity.

His homecomings to Kerala were memorable for him and for Keralites.

His sister and brother kept away from Rashtrapati Bhavan, but the Rashtrapati came to see them often.

On one occasion, he broke down when he recalled how his sister had to give up schooling to save resources for his education.

She would have accomplished much, if she did not have to make that sacrifice, he said in a broken voice. IMAGE: Kocheril Raman Narayanan is sworn in as the President of India by Chief Justice of India J S Verma, July 25 1997. Photograph: Reuters

KRN was a catalyst for the creation of the Federation of Kerala Associations of North America to bring the Malayalees in the United States and Canada under one umbrella.

FOKANA, now a strong association, is a monument to his thoughtfulness.

He also readily agreed to be the chief patron of the Thiruvananthapuram University College Alumni Network even as the President of India.

He gifted his home to the Shantigiri Ashram and it is now known that he had wanted that the priests from that Ashram should perform his last rites.

No wonder Kerala treats him as one of its greatest sons.

His picture occupied the whole front page of the Malayala Manorama newspaper on the day after his death.

KRN's journey from a humble cottage in Uzhavoor to Rashtrapati Bhavan in New Delhi was no less spectacular than that of Abraham Lincoln from the log cabin to the White House.

Perhaps, it was even more sensational as Lincoln did not have to fight centuries of caste prejudices that KRN had to overcome.

It is said that if the maharaja of Travancore had not advised him to make a living outside his home state, he would not have reached the dizzy heights of political life.

But a man of his talents and integrity would certainly have risen to great heights wherever he lived and worked.

His centenary reminds us that life may be full of lucky and unlucky accidents, but when talent and good fortune meet, the right man reaches the right place at the right time. 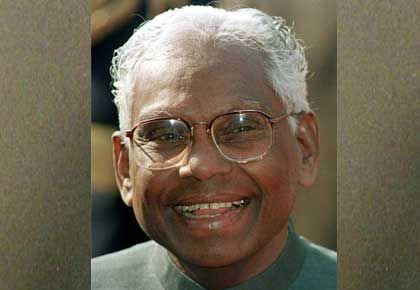 Ambassador T P SREENIVASAN
Related News: KRN, Kocheril Raman Narayanan, Abraham Lincoln, Rashtrapati Bhavan, IMAGE
SHARE THIS STORY
Print this article
'The freedom to err and correct is the essence of democracy'
'The greatest achievement of India since Independence has been the establishment of a democratic system of government and politics' 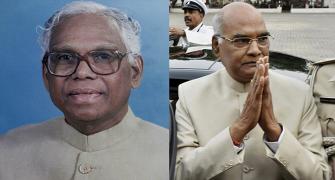