'All enemy positions lay exposed, providing immense information to the Indian Army and IAF to conduct successful flushing out operations.' 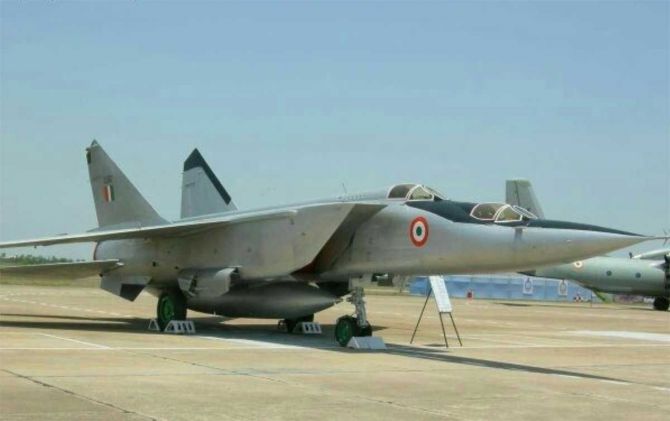 IMAGE: The MiG-25: 'It was a beast with immense power. It was an awesome airplane by any standards.' All photographs: Kind courtesy Air Marshal Sumit Mukherjee

There is an interesting story about one of the missions flown over Pakistan in the late nineties.

After the photographic evidence was gathered, the pilot decided to accelerate the aircraft to exit out of Pakistani airspace, causing a sonic boom that was likely heard in every household of Islamabad and stunned that country's military and political establishment and, of course, got a lot of media attention!

Despite the fact that this aircraft wasn't armed, it had the guts to do so only because it had the height and speed that was unmatched!

Even enemy radar had a tough time identifying such a fast moving blip on their scopes at such great heights, and more often than not, the blip that the aircraft created was treated as spurious and no action was taken.

Since intelligence gathering is the key to success of any operation, this aircraft, without any armour or protection, got us information about the enemy so vital for our success.

While researching features on the Indian Air Force's role in the Kargil War, I discovered how the MiG-25 had played a special role in the conflict.

It was early 1999 and the Indian Army was still not aware of the extent of infiltration by the Pakistanis to take over the strategic icy heights of Kargil.

Jaguars and MiG-21s photo reccee missions had not revealed much largely due to the quality of the cameras carried and the undulating terrain of the area.

It was decided to push in a MiG-25 with its superior cameras into service, and the missions were to be flown all along these heights, very close to the border.

The only difference this time was that the aircraft was ordered to fly low and slow, something that it wasn't built for and also was risky.

It was vulnerable to attack from the ground by missiles as well as interception by enemy fighters.

Nevertheless, the risk was taken and a few missions were flown, with some protection given by the then best Air Defence fighter that the IAF had -- the MiG-29.

The photographs that the aircraft got back were crystal clear. Every ridge showed presence of Pakistani troops who were well entrenched in the bunkers, well inside our territory.

Our commanders were now convinced that urgent retaliatory action was needed. What followed, of course, is history. 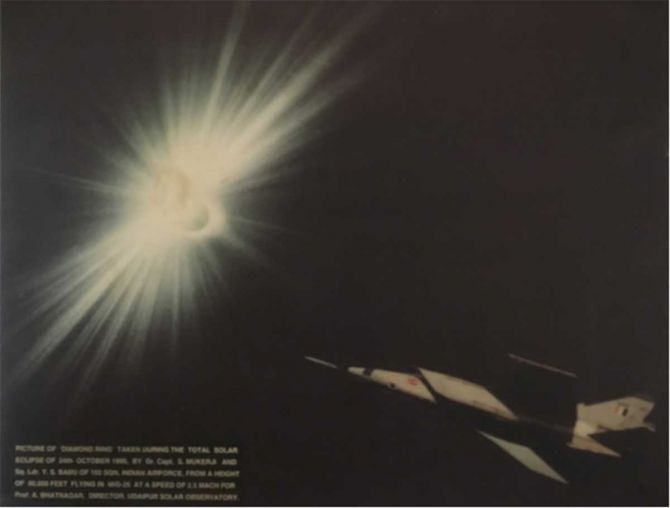 IMAGE: The 'starburst' -- when the sun peeped from the ridges on the surface of the moon -- was a sight to behold and an experience of a lifetime for the MiG-25 pilots.

In Air Marshal Sumit Mukherjee's recollections, "Every ridge, every crevasse, every approach and defile was clearly defined, all enemy positions and bunkers in the craggy and inhospitable mountain ranges lay exposed, providing immense information to the Indian Army and the IAF to conduct successful flushing out operations."

I wanted to know from the veteran about an unusual peacetime role that this aircraft was employed on.

The air marshal asked me to look up an interview of his in Hush Kit, an aviation magazine, where it was published as 'Loneliness at Mach-3'.

On October 24, 1995, the world witnessed a total solar eclipse over north India.

The Udaipur Solar Observatory requested the IAF to carry out aerial photography of the event from the stratosphere and the IAF agreed to deploy three MiG-25s for the job.

A special camera was fitted in the cockpit to photograph the eclipse directly from the front while the integral aircraft camera situated in the belly photographed the traverse of its shadow over the earth.

The three MiG-25s fed into the predicted path of the eclipse and the photography started two minutes before the onset of the eclipse.

The scientists got the data they wanted, but for the pilots in these aircraft, the diamond ring and the 'starburst' -- when the sun peeped from the ridges on the surface of the moon -- was a sight to behold and an experience of a lifetime.

It was 2006, and the aircraft was a few weeks away from its retirement. It was now that India decided to make public the existence of this machine.

A few journalists were allowed to visit the squadron and report on its exploits which made headlines.

The role of this aircraft has now been taken over by satellites and unarmed aerial vehicles, which can get you a clear photograph of a golf ball from 400 km up in space.

"If we had digital cameras and the systems available today, we could have used the aircraft for a few more years," says Air Marshal Mukherjee. 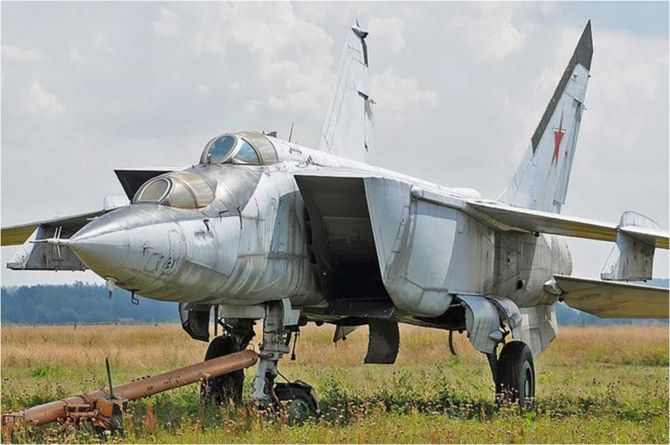 IMAGE: A MiG-25: 'The deafening roar of the twin Tumansky turbojets that shattered the morning sky and pretty much rattled everything and everyone on ground never failed to amaze me.'

The aeroplane found its way into museums and institutions like the National Defence Academy and stands there proud, tethered to the ground on plinths, reminding the new generations that there was once an unarmed fighter that was purely used for photo imagery.

A veteran wing commander who flew the aircraft, recalls, "Growing up as an ardent and aspiring aviator, I always dreamt of flying 2 machines -- The MiG-21 'Fishbed' and the MiG-25 'Foxbat'. Both these machines fascinated me immensely by their design and capabilities."

"I was blessed to be posted to Bareilly to fly the hush hush machine. I was soon operational on the aircraft and went on to carry out many a mission, exploiting the capabilities of the machine to the hilt," he remembers.

"The deafening roar of the twin Tumansky turbojets that shattered the morning sky and pretty much rattled everything and everyone on ground never failed to amaze me."

"Post a mission, the feeling of achievement, as one switched off the two mighty engines and opened the cockpit in the dispersal was exhilarating always and every time."

"Given a chance, I would do it all over again if I could! I still love my Foxbat and cherish my time in her cockpit!" exclaims the wing commander, adding, "She was truly a marvel of technology of her times." 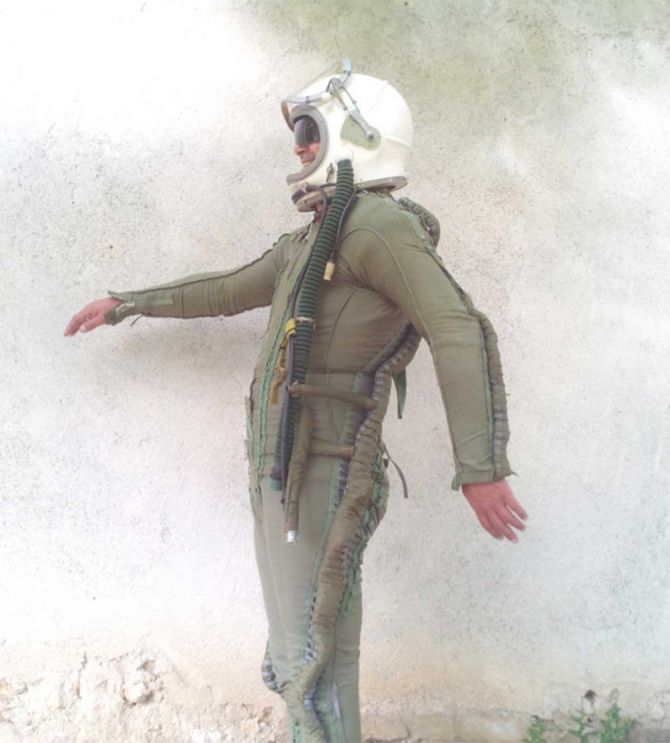 IMAGE: 'Wearing almost the same pressure suit as that used by Yuri Gagarin, the first man in space, topped by a 2.5 kg helmet.'

"Flying the MiG-25 was the ultimate 'high' -- a dream come true and a privilege to belong to the elite 'Mach 3 Club'," says Air Marshal Mukherjee when I seek his memories of flying the aircraft.

"A 20-ton aircraft that carried another 20 tons of fuel, flew in the stratosphere, cruised at Mach 2.5 in minimum afterburner and could exceed Mach 3 if necessary, it was a beast with immense power. It was an awesome airplane by any standards," says the IAF veteran.

"Wearing almost the same pressure suit as that used by Yuri Gagarin, the first man in space, topped by a 2.5 kg helmet, we flew in the stratosphere where the sky was not blue, but rather, shades of grey, darkening as one reached the dizzying heights of 85,000-90,000 feet, approaching the blackness of space."

"Few people have the privilege to experience these environments in aviation," says the air marshal. "Cruising through operational missions, the inaccessible altitudes and speeds allowed the MiG-25 to operate with impunity over hostile air space." 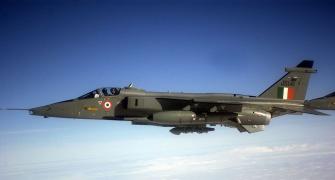 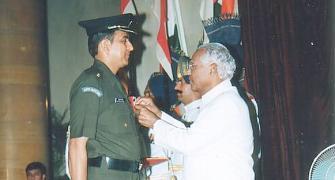 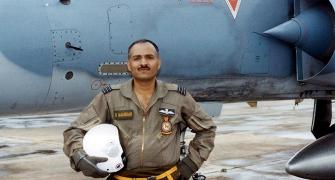 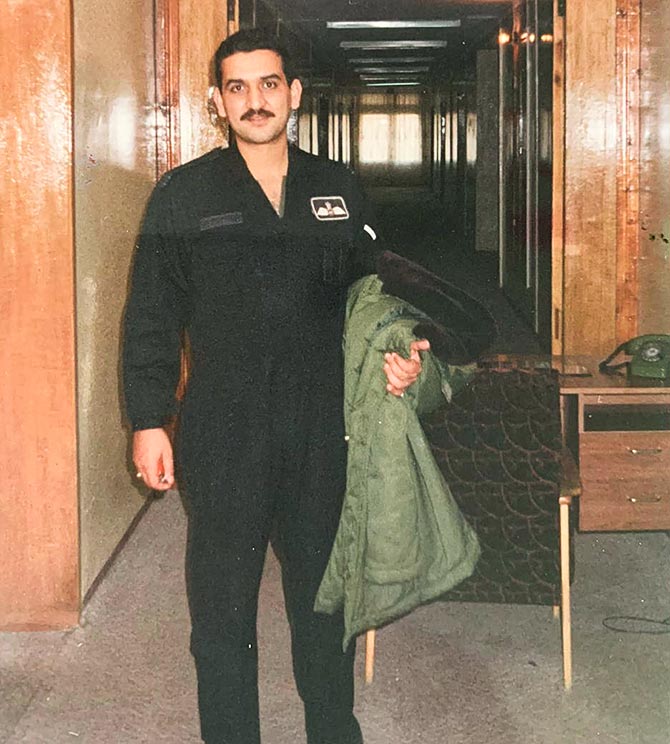 Kargil: When the choppers attacked the enemy 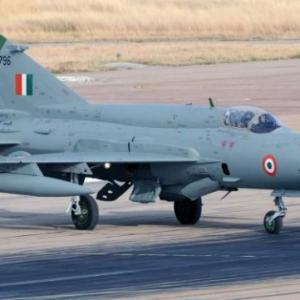