Indrani looked cheerful and upbeat and announced she had quite recovered from her wounds...
Vaihayasi Pande Daniel reports from the Sheena Bora murder trial.
Illustration: Dominic Xavier/Rediff.com 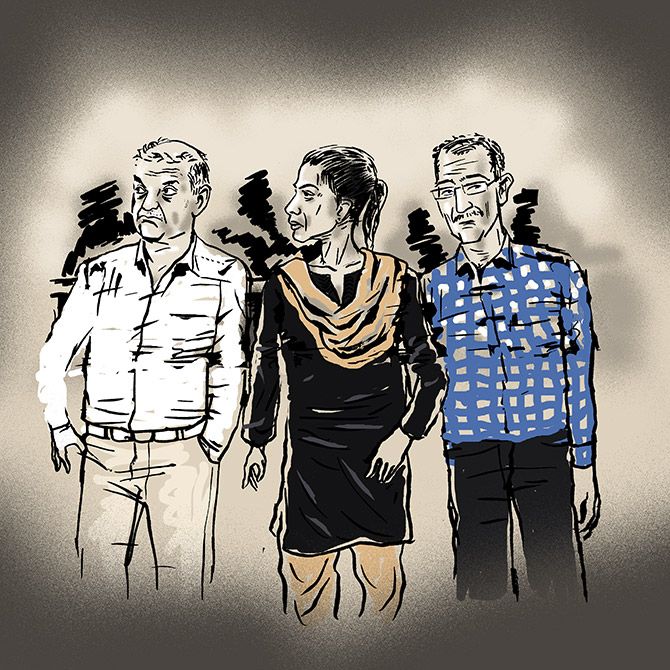 Noah Cbina John and I spent much of the day together inside and outside Courtroom 51 of south Mumbai's sessions court.

He is from Africa. Perhaps Nigeria. He's Narcotic Drugs and Psychotropic Substances case 100083 from 2013. His was the first matter of the day.

Noah, wearing a maroon shirt, dark trousers and a winning smile, got off the 11.15 am jail bus, probably from the Taloja prison on the outskirts of Mumbai, with an assortment of other male prisoners.

The variety was startling on Monday, July 17 -- a few swamis clad in saffron/white, jhap beads and elaborate tikkas (Malegaon Blast case); some long white bearded, skull-capped folks, youngsters in jeans and tees; two disabled men, one hobbling on a crutch; and a clutch of well-heeled sorts.

As I bumped into Noah, and his one sometimes two-man police escort, multiple times during the day, we exchanged tentative smiles and I mulled over who was more at sea in this setting.

He, with probably no English, but now a few words of Marathi, and a hang of the Indian lavatory sign language?

Likely me. Six months has not enhanced my court IQ, or understanding of Indian legal procedure a whit, as I puzzled where everyone was today. For three hours the only person I had seen in the vicinity of Courtroom 51 was Noah.

The Sheena Bora murder case was scheduled for a late afternoon hearing and Judge J C Jagdale was in his seat from the morning. But nothing happened on Monday, in the pattern it has happened before, or like it did at the last hearing.

The accused -- Sanjeev Khanna, Peter Mukerjea and Indrani Mukerjea -- were not bussed in at the usual morning hour. Past 2 pm they still hadn't shown up. Nor a single lawyer or any member of the CBI team.

The corridors were quiet and unpopulated, as the warm monsoon rain cascaded down outside, with rivulets of water often trickling ominously towards you down the benches.

The only other seating was a broken-down chair, its back tipping drunkenly sideways. The silence was broken momentarily when the court kitten came yowling loudly along, peeped her head into the courtroom, and then the judge's chamber, before strolling off along the dripping eaves.

Had I got the day wrong? No, the matter was up on the noticeboard.

And Sanjeev's photographer cousin Nikhil Kapur, with his knapsack of paperback thrillers for Sanjeev, and Peter's friend, with a thermos of garam chai, were waiting too, for hours like me and Noah.

Noah was being taken on walks by his escort. Sometimes downstairs. Sometimes for a spin in the corridor. Or else he was parked back on a bench inside. None of it was to his wishes, it seemed.

Just before 2.30 pm, Peter's senior lawyer Shrikant Shivade arrived. He too killed time, perching himself on a high table outside, swinging his feet, as he chatted with junior lawyers outside the courtroom. CBI officer K K Singh then arrived with his colleague.

At 2.30 pm Peter, Sanjeev and Indrani all finally showed up together, at the entryway of the new sessions court building, escorted by ten policeman/women.

Together with their escorts they made an unlikely configuration.

Indrani was in a black kurta and beige salwar outfit, clutching a red plastic bag.

Sanjeev, crisp and business-like in a long-sleeved, blue-checked shirt and black pants, and she came up six flights of stairs, trailed by the platoon of khaki.

Indrani looked cheerful and upbeat and announced she had quite recovered from her wounds.

Peter, on the other hand, for unknown reasons, was taken in the rickety, noisy lift, that orders 'Close the door' every two seconds in a loud staccato.

The three sat for a while outside talking individually to their lawyers and poring over legal documents.

The fragile détente between Peter and Indrani seems to be continuing with Indrani at one point going across to him to tell him that his lawyer was there. "Peter is not talking to his lawyer. I am," she said with an infectious grin.

Their police protection swelled to 15. One of the policewomen, with them, carried a not very mean-looking rifle, whose barrel was wrapped with a blue plastic bag, in protection against the monsoon.

Would it then be able to fire bullets? Did she know how to wield it?

When their matter came up, they were summoned in, this time Peter, Sanjeev and Indrani were not taken to the formal accused enclosure at the back. Instead they sat in the rows of seating behind the lawyers' bench, with their police escort.

Maybe after Peter's request to be seated towards the front, so he could hear the trial, Judge Jagdale had relented. Or maybe Monday was a different day legally speaking.

Noah C John sat in the accused enclosure, throughout the proceedings, an amiable, calm smile playing on his face.

The business of Monday's hearing focused on legal procedure and etiquette.

No witnesses were brought in. The witness box, up front, remained empty.

No new material was unveiled. Nor could I figure out why Noah was a bystander at the day's events.

Flashback: At the last, and technically second day, of the actual trial, witness Ganesh Dalvi, a police constable posted at the Khar police station, north west Mumbai, concluded his testimony, minus the parts that were not legally admissible, on his interactions with Shyamvar Rai, the Mukerjeas' driver, who has turned approver in the case.

The defence, for Accused One, Two and Three -- which is in the hands of trial lawyers Sudeep Pasbola, Niranjan Mundargi and Shrikant Shivade (of Salman Khan case fame), respectively, assisted by Gunjan Mangla, Ayaz Khan (of Fardeen Khan trial fame) and Shreyansh Mithare -- declined to cross examine the witness.

They announced then that they reserved the right to do so later, after hearing Rai's testimony and the deposition of others.

Perhaps the lawyers were prepared -- in advance -- that the CBI counsel would hit back on that last point, in this hearing, because the arguments were all well prepared and subsequently smoothly maneuvered on both sides.

CBI advocate Kavita Patil, statuesque in a starched grey sari, with a floral gold and black border, stood up to say that the defence needed to cross examine Ganesh Dalvi now, or forfeit their right to examine later.

Shivade, who has an elegant but tactically reasonable manner of arguing, slowly rose to his feet.

He is a tall, dignified man, with a neat moustache. He methodically and gently placed his legal reasoning before the judge, in a quiet voice, buttressing it with key segments from Section 231 (2) of the Code of Criminal Procedure and Section 135 of the Indian Evidence Act 1872 (these sections back up his argument lawfully).

He voiced how there was usually a natural order and decorum to how witnesses are produced in a criminal case and indirectly chided the CBI counsel for starting off a murder trial with the testimony of an "investigating officer."

"Normally it is up to the discretion of the prosecution to (decide) the order of examination (of the witnesses)," Shivade said. But he said Section 135 suggested the progression should not be "an arbitrary order."

Shivade pointed out that it was puzzling that though there had been two chargesheets for Shyamvar Rai --one under the Arms Act for possessing an unlicensed pistol and one for murder -- the CBI had chosen to launch just one investigation.

The lawyer didn't dwell there much further but said that if they cross examined Dalvi, before hearing Rai, they would have still more questions for Dalvi later, after hearing Rai.

What's more their defence strategy might be prematurely revealed or compromised.

"My prayer is that we defer the examination of Dalvi till Shyamvar Rai testifies," was Shivade's plea.

Second CBI counsel, silver-haired Bharat Badami, whose style of argument verges on the theatrical, emphasising his points in a voice that works its way up to a crescendo, as he gets louder and angrier, spoke about how if there are any "contradictions and omissions" the defence can claim a chance to examine Dalvi later and why waste time.

Badami and Kavita Patil spoke about how an out-of-order cross examination might confuse the witness.

To which Shivade replied that Dalvi had credentials that showed him up as "a seasoned officer" not likely to be befuddled or boggled by a later-date cross examination.

Peter's defence lawyer was at pains to point out that in the interest of a "fair trial" and "to protect the fairness of the defence of the accused," and because the order of the witnesses was left up to "the discretion of the prosecution," the defence needed their appropriate time with Dalvi when they requested it.

And so the legal skirmishes went to and fro -- palavers between veteran attorneys.

Monday afternoon's hearing was all about lawyerly showmanship. And one-upmanship.

Each advocate showing their best thrust and parry technique.

Indrani's sharp eyes roamed the court, between taking in the arguments and, as is habitual for her, conveyed her assessment and comments to Sanjeev at intervals.

Peter craned forward, making sure he caught every nuance, taking notes at points.

Khan, a lawyer for Accused One (Indrani) said, that while he agreed entirely with what Peter's counsel had stated, he had something vital to add.

He pointed out, in a booming voice, that got heads swiveling, that the prosecution's order of witnesses had "room for improvement."

It was his polite turn of phrase for saying it was defective, especially since first witness Dalvi caught Rai in possession of an illegal firearm and had promptly concluded him also responsible for the murder of Sheena Bora too -- this all said in the testimony of the first witness heard by the court.

Judge Jagdale heard each lawyer with rapt attention, leaning forward in his chair, at times, requesting more convincing, this way or that, from each of them -- "argue it for me."

At the end, the judge said, "I will give an order."

He then, in hushed tones, worked with the court stenographer to record a summary of the statements and construct an order.

It is interesting to note that while much of the business of the court under Judge Jagdale's recent predecessor Judge H S Mahajan, was conducted in Hindi or Marathi, it had now effortlessly shifted to mostly English.

Badami's face fell. In an exaggerated crestfallen tone, he mournfully concluded, "We will now apply our minds on how to proceed."

The defence lawyers smiled, at which he took pretend umbrage that they were laughing at him. Later when Shivade was leaving the courtroom he playfully ribbed Badami once more.

Proceedings wound up with some disagreements on the next date. July 28 morning was settled on, although Shivade said he had to be in the Bhiwandi court, north of Mumbai, for a case and would come late.

Given that Bhiwandi is 50 km away and courts open beyond 10.30 am, well into traffic hour, I wondered how it would remain a morning matter…

Shivade and Peter approached the judge requesting a Khar police thana diary and the matter would come up in court on July 25.

Half an hour after the hearing was over, Accused Two and Three departed after several rounds of chai.

Indrani was the last to leave, braving the hammering rain with her escorts under a series of bobbing red and blue umbrellas that wound their way to the jail van.

EARLIER IN THE TRIAL 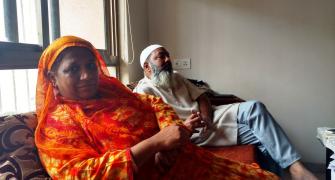 Mr and Mrs Patel wanted to be President... 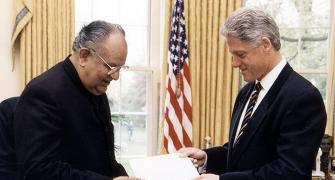 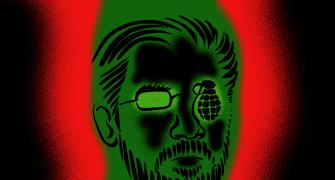 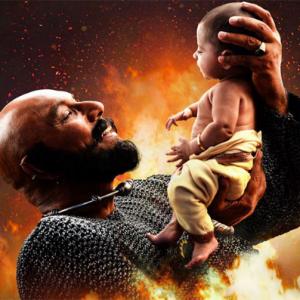