For the 2019 polls, the BJP chief deployed over 7,000 leaders to oversee the work of polling committees on the over 400 seats the BJP contested.
These committees were asked to focus on 120 seats the party had lost in 2014, but believed it could win in 2019.
Archis Mohan reports. 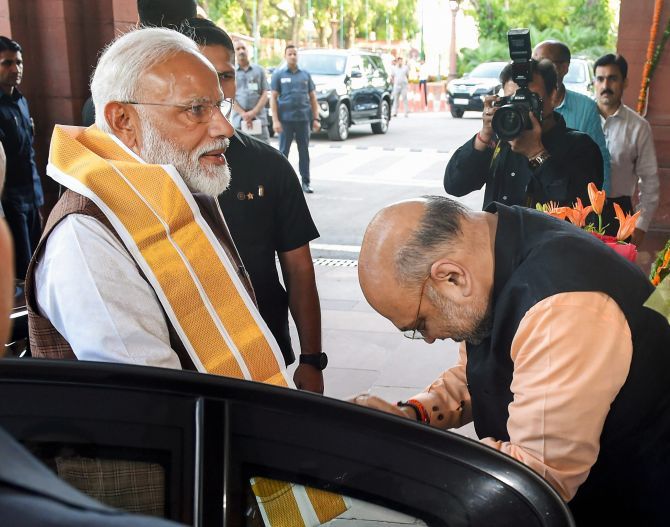 Almost a decade back, in mid-2010, Shah spent time in jail in the Sohrabuddin Sheikh encounter case. Four years later, Shah was the BJP chief and could now be the most important minister in the new Narendra Damodardas Modi Cabinet.

Many in his party believe Shah would be Modi's natural successor.

Shah won the Gandhinagar seat, his first Lok Sabha contest, by over 555,000 votes. More than that, while the BJP won a second term under Modi's leadership, the party credits Shah, the Chanakya, of masterminding the win, as he has done on several occasions in the last five years.

Shah as BJP chief, ever since he took over from Rajnath Singh in July 2014, has kept the party galvanised and battle ready at all times. His objective is to have the BJP rule from 'panchayat to Parliament'.

Over the past five years, Shah has delivered unlikely electoral victories for the BJP.

The BJP chief has also nursed younger leaders, and unlike the rival Congress where it can take leaders years before they get any rewards, Shah has fast-tracked key leaders to key ministerial posts at the Centre or in states, or ensure their entry into the Rajya Sabha.

The key difference between Shah's tenure and those of his predecessors, younger leaders say, is that he rewards parakram when earlier only those indulging in parikrama, or spending time around leaders in Delhi, would get promoted in the party.

Another feature of Shah's tenure has been to strengthen the party organisation, build party offices and libraries in hundreds of districts across the country.

Under Shah, the BJP's poll machinery is well oiled, with practices like appointing panna pramukh, or polling booth workers, being adopted by other parties, however, with not as much success since they lack the Rashtriya Swayamsevak Sangh's support.

With the huge membership drive that Shah undertook in 2016, he has tried to reduce the BJP's reliance on the RSS.

For the 2019 polls, the BJP chief deployed over 7,000 leaders to oversee the work of polling committees on the over 400 seats the BJP contested. These committees were asked to focus on 120 seats the party had lost in 2014, but believed it could win in 2019. The BJP also deployed 3,000 full-time workers.

Under Shah, the BJP has become an effective vehicle to spread the message of the Modi government's policies, programmes and schemes. Ministers are frequently roped in to address the media, or even party workers in different parts of the country to popularise Modi government schemes.

A backroom strategist to start with, Shah has now become a political leader in his own right. In the 2019 polls, he led from the front, holding over 161 rallies and visiting over 312 Lok Sabha seats, clocking over 158,000 km.

The BJP under Shah has proved to be an election-winning machine, but it has also been keen to strike alliances wherever the task of winning an election on its own has been difficult.

On occasion, the BJP has imported key leaders from other parties, be it Himanta Biswa Sarma from the Congress in Assam or Mukul Roy from the Trinamool Congress in West Bengal.

If Sarma helped the BJP win the Assam assembly polls of 2016, Roy's importance has been proved in the Lok Sabha elections in Bengal with the BJP winning its highest number of seats in that state.

Sarma has also strengthened the BJP in the rest of the north eastern states. Shah, his associates say, has always believed that the allies would keep coming as long as the party is delivering in the polls.

The year 2010 was one of the bleakest for Shah. He had been to jail and later the Supreme Court had barred him from living in Gujarat. Shah then spent time in Delhi and Uttar Pradesh. In 2013, then BJP chief Rajnath Singh appointed him general secretary of the state.

Few had expected Shah to deliver 73 of UP's 80 Lok Sabha seats in 2014, which included two seats of its ally Apna Dal. A few months later, Shah replaced Singh as the BJP chief. Shah then proceeded to deliver Haryana, Jharkhand and Maharashtra.

For the Jammu and Kashmir assembly polls, Shah deputed party leader Ram Madhav to give shape to an alliance government after the BJP turned out its best ever electoral performance in the state.

However, 2015 did not go well for the BJP. The Modi government was criticised for its land Bill. The Opposition swooped on the PM's choice of attire when he wore a suit monogrammed with his name. The BJP suffered a huge defeat in Delhi and then by the end of that year in Bihar.

In Bihar, Modi and Shah waited for their opportunity and kept their channels of communication open with Janata Dal-United chief Nitish Kumar.

As Kumar's frustration with the Rashtriya Janata Dal increased and Congress President Rahul Gandhi refused to ditch his party's old ally to support Kumar, the BJP swooped in.

The result was that Kumar's JD-U was back in the NDA fold by July 2017.

The year 2016 proved marginally better for the BJP as the party improved its vote share in West Bengal and formed its first ever government in Assam. Shah's next big success came in 2017 when the BJP won a massive win in Uttar Pradesh, held onto Goa by getting smaller parties to support it.

The year ended with the BJP wresting Himachal Pradesh from the Congress and retaining Gujarat in a tough election.

Another of the BJP's success was defeating its ideological rival the Left Front in Tripura.

The BJP performed well in Karnataka to emerge the single largest party in the election in May 2018, but could not prevent the Congress and the Janata Dal-Secular from forming the government.

The BJP suffered defeats in the Hindi heartland states of Chhattisgarh, Madhya Pradesh and Rajasthan in December 2018.

However, the BJP by sweeping these states in the Lok Sabha polls has somewhat undone the damage.

The Karnataka and Madhya Pradesh governments have wafer-thin majorities and the two states could soon see BJP governments. 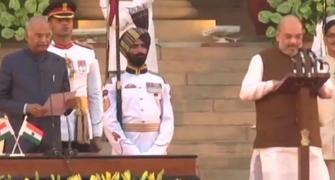 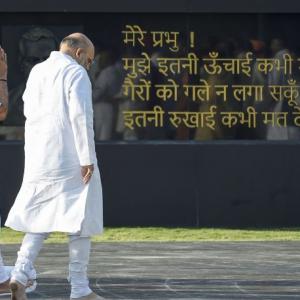