Prime Minister Modi has entrusted Amit Shah with the task of coordinating all the agencies with their power to monitor movement and phone calls, says R Rajagopalan. 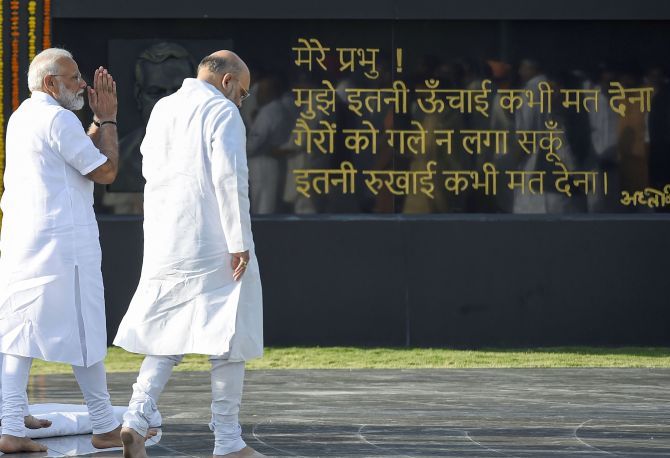 Till last month Amit Anilchandra Shah may have been the de facto second most powerful man in India, but with his recent appointment as Union home minister he has also emerged as the de jure second most important man in the country after Prime Minister Narendra Damodardas Modi.

For sceptics, here are 10 pointers to show just how powerful Amit Anilchandra Shah really is.

One, National Security Advisor Ajit Doval, hitherto considered the second-most important man in the government, meets the new home minister on instructions from the prime minister.

What is interesting is that the orders on Doval's extension in service and elevation to Cabinet minister status were issued on Sunday. Contrast this with the silence on Principal Secretary Nripendra Mishra's future.

The Monday morning meetings are somewhat of a fixture in the home ministry; interestingly, Doval called on Shah for a second time on Monday afternoon.

The meetings took place against the backdrop of reports that the home ministry was considering a delimitation exercise in Jammu and Kashmir, or a redrawing of constituencies, to factor in the latest demographic changes, a move that is not expected to go down well in the restive valley.

Three, Shah is briefed daily on national security by the intelligence agencies. Till recently the briefings were given to Modi, with former home minister Rajnath Singh being in the loop, but not in a decision-making capacity.

Four, S C Jha, director general, National Technical Research Organisation, meets Shah. So far the NTRO, whose inputs on the number of active terrorists at Balakot went into the decision-making on carrying out the air strike, only briefed the NSA, but from now on the home minister will also be part of its circuit.

Five, Shah will visit the border states both before and after the Budget session of Parliament, and a massive calendar is being drawn up accordingly.

Sixth, changes are afoot in the prime minister's office as well. Principal secretary to the prime minister Nripendra Mishra may not get an extension; a straw in the wind is that he is yet to get an appointment with Modi who, it is learnt, is keen to promote Additional Principal Secretary P K Misra to the post.

PK, as he is affectionately called, is a Gujarat cadre IAS officer, but hails from Odisha.

Seven, Anil Dhasmana, secretary, Research and Analysis Wing, met Shah on Monday to brief him on the situation in the border states, with a focus on international operations, following instructions from the PMO.

Eight, with the induction of Shah and Dr Subrahmanyam Jaishankar as Union ministers, Ajit Doval's powers have been whittled.

Nine, since the home minister is a member of the Cabinet appointments committee, which is headed by the prime minister, the duo will play a key role in managing 8,000 IAS, IPS and other allied service officers.

Ten, some 22 governors have so far called on Shah. Most of them have completed their five-year tenure. By the middle of July, with Modi's approval, Shah plans to have new governors in all the states.

Taken together, all the above indicate one and only one thing. That Prime Minister Modi has entrusted Amit Anilchandra Shah with the task of coordinating all the agencies with their power to monitor movement and phone calls.

The real game begins now, quipped a senior bureaucrat who is in the know of daily developments in the corridors of power.