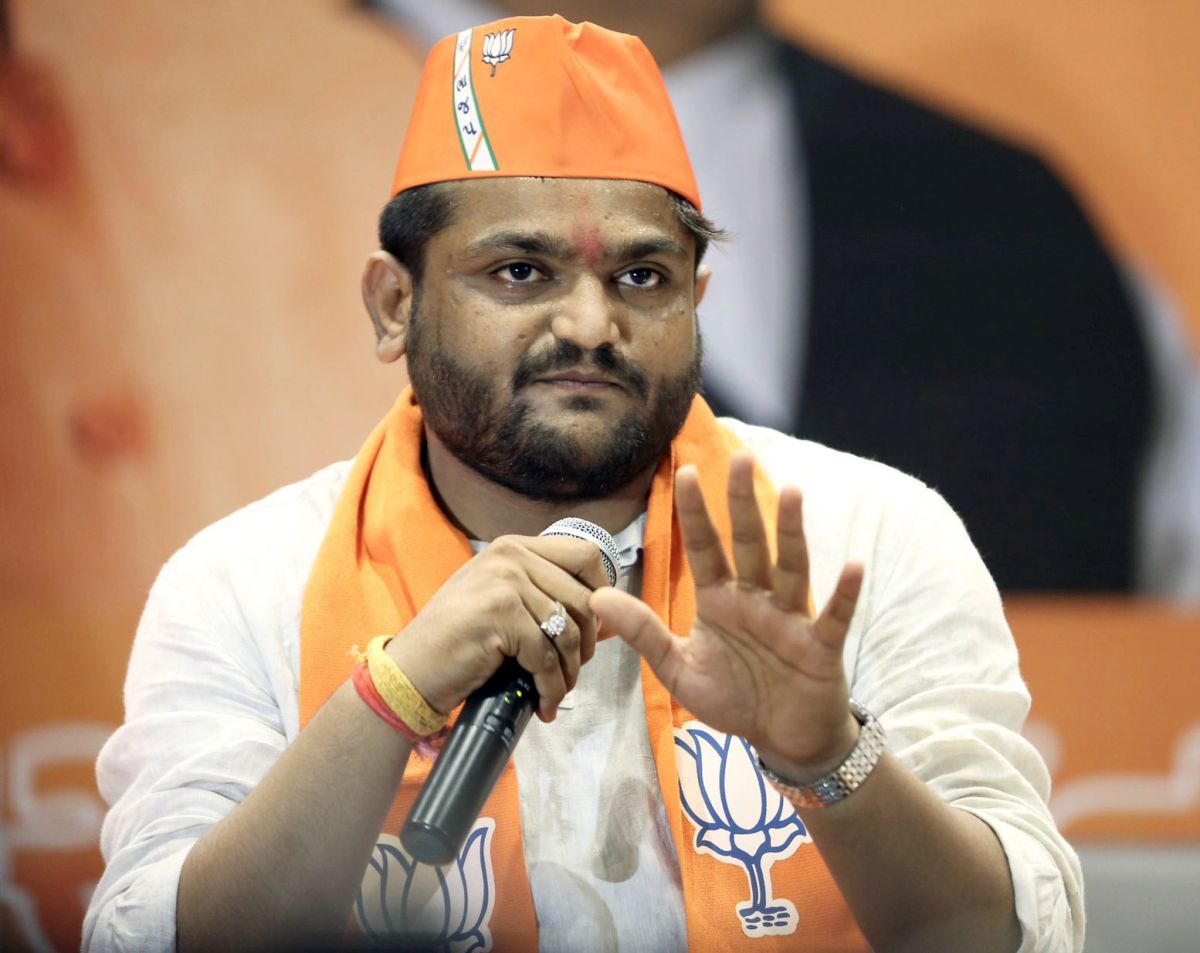 When Hardik Patel's sister Monica scored 84 per cent in the Class 12 examination, there was jubilation in the Patel household.

But the reality struck home soon as the family realised that she would not get a state government scholarship because her caste -- Patel or Patidar -- was not eligible for it.

One of Monica's friends, who scored 81 per cent, got a scholarship -- because she was an OBC (Other Backward Classes).

This incident was the genesis for Hardik Patel, political phenomenon. He launched the Patidar Anamat Andolan Samiti, whose primary aim was to get the Patel community on the OBC list.

The Patels were known to be supporters of the Bharatiya Janata Party and it was only a year since Gujarat's then chief minister Narendra Modi had shifted to New Delhi on becoming India's prime minister.

That did not deter Hardik who began organising the Patels to take on the BJP administration in Gujarat.

Hardik brought almost six lakh Patels on the roads of Gujarat in August 2015 to demand reservations for the community.

Few could believe that a state which had voted all 26 BJP candidates to the Lok Sabha in the May 2014 election, would see such a revolt against the BJP government in the state.

Ironically, the chief minister was a Patidar -- Anandiben Patel -- who could not end the community's protest.

More than 100 state government buses were reportedly burnt. Many private properties were torched.

The violence only ebbed after Modi made a televised appeal for calm.

A new political star was born in the crucible of the Patidar protest.

Hardik showed that the mighty Narendra Modi and Amit Shah's leadership could be challenged in their backyard.

The Gujarat government unsurprisingly struck back, slapping a reported 23 cases against Hardik in different parts of the state/

In the seven years since then, Hardik has been in and out of jail in different cases.

In 2016, his associates Chirag Patel and Ketan Patel accused Hardik of misusing funds meant for the Patidar protest.

Chirag and Ketan were in jail along with Hardik -- all three Patels had been charged with sedition -- but despite their earlier proximity to him, their allegation did not stick. The Patel community gave Hardik a clean chit after he denied wrongdoing.

'This makes no difference to me,' Hardik stated in his defence, 'but a Gujarati woman is being defamed.' Hardik alleged that the BJP was using a fake CD to defame him before the elections, adding later, 'I am yet to marry and I am not impotent.'

In Gujarat, Patidars constitute less than 15 per cent of the population, but wield considerable influence and power as the community has a grip over businesses, the cooperative sector, small and medium enterprises, private education and the realty sector.

Knowing it could not risk the Patels' ire, Anandiben Patel -- a long-time Modi associate -- was replaced as chief minister by Vijay Rupani in August 2016.

But that change meant little when the 2017 assembly election came around.

In 52 seats where the Patidar population numbers 20 per cent and more, the BJP won 28 seats while the Congress bagged 23.

Five years earlier, in the 2012 assembly election, the BJP had won 36 of these seats while the Congress won 14.

The BJP overall won 99 seats and the Congress 77 in the 182-member state assembly.

Fourteen Congress MLAs later defected to the BJP, and in ensuing by-elections, the Congress tally was further reduced to 63 MLAs.

In March 2019, a few weeks before the Lok Sabha election, Hardik joined the Congress and was made its working president for Gujarat.

As he had been sentenced to two years in prison in the 2015 Visnagar rioting case, he could not contest the parliamentary election.

Asked then if he was upset that he could not contest the Lok Sabha election, Hardik said, 'I am only 25, so where is the hurry or pain in this? I am the new India and will fight elections after five years.'

The BJP again won all 26 Lok Sabha seats in the state, making Hardik Patel look like an immature political upstart chafing at the might of a political Goliath.

But Hardik did not give up, calling Home Minister Amit Shah 'General Dyer' and Prime Minister Modi 'Publicity Minister' in his tweets.

But Hardik soon realised he had no role to play in the state Congress party, and no responsibility was allocated to him.

He also grew insecure in recent months when he discovered that the Congress leadership was keen to induct Naresh Patel in the party before the Gujarat assembly election in December 2022.

Naresh Patel, an industrialist, is chairman of the Shree Khodaldham Trust which is influential in Gujarat. The trust manages a temple, which is the patron deity of the Leuva Patidar community, at Kagvad near Rajkot.

Naresh Patel, who is known for his philanthropic activities, is a Leuva Patidar, a community which has significant influence in 48 assembly seats.

Political strategist Prashant Kishor had mooted this idea to the Gandhi brother and sister, and the development caused Hardik heartburn.

Hardik got an opportunity to attack the Congress after its former working president in Gujarat, Bharatsinh Solanki, said, 'People donated for Ram Shilas in the late eighties for the construction of the Ram temple and the BJP never took care of the Ram Shilas.'

'The Congress is trying to damage the Hindu religion,' retorted Hardik quickly. 'Why hate Hindus so much?'

When he finally resigned from the party, Hardik accused the Congress of taking anti-Hindu decisions while opposing the Citizenship (Amendment) Act, the Ram temple in Ayodhya and the abrogation of Article 370.

Without naming Rahul Gandhi, Hardik took potshots at him, saying, 'Top Congress leaders were distracted by their mobile phones and the Gujarat Congress was more interested in ensuring chicken sandwiches was served for them.'

After all the jibes, Hardik on June 2 took a decision many Congressmen in Gujarat saw coming from miles away. He joined the BJP saying he would work as a 'small soldier' in the development work being carried out under Modi's leadership.

He also deleted his old tweets against Shah and Modi.

Hardik can now hope to see the 23 cases lodged against him being withdrawn as he begins his new innings with the BJP. 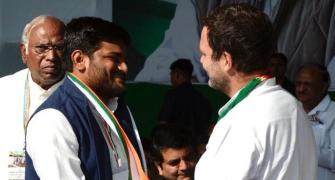 'Some people think Modi is only appeasing the Patels' 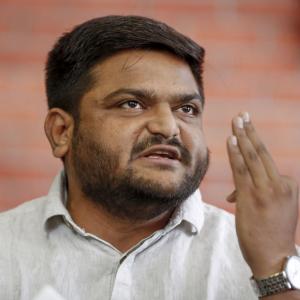