'There are 8-12 members living in the same accommodation. While in pre-lockdown days, since most were out on work, social tension among them was less because of limited interaction. But now, no food and livelihood, along with having to live in cramped conditions, is taking a toll on their mental health.'

As many as 80 migrant workers were arrested on April 10 for setting vegetable carts on fire, demanding their return to home states.

By the first week of May, multiple incidents of stone throwing and arson had been reported, and also two fresh incidents of thousands of migrant workers coming out in the streets in the Vareli and Palanpur areas of Surat.

Hailing mostly from Uttar Pradesh and Bihar, working in textile-dyeing and printing factories in several Gujarat Industrial Development Corporation’s (GIDC’s) estates and powerloom units, the migrants were seen shouting slogans against the administration.

Surveys by local non-government organisations found that several migrant labourers did not have any ration left even as many of them had lost their only source of income right at the beginning of the lockdown.

It is estimated that in a city like Surat, migrants make up 70 per cent of the city's workforce, largely engaged in textile units across the value chain, followed by construction, engineering, and diamonds.

In the textile industry alone, there are an estimated 1.5 million migrant workers.

Hence, managing such a large number of idle and unemployed migrant workers was a tough job for the local administration and the state government.

Moreover, Surat has migrant workers from more states than other cities in Gujarat do.

"There are workers from Andhra Pradesh and Telangana to Uttar Pradesh, Odisha, West Bengal, Bihar, Rajasthan, and Maharashtra.

"Hence, it is not just a large population but also a diverse one," said Manish Doshi, spokesperson for the Congress in Gujarat.

However, there is more to the incidents than just the large population.

First of all, it is the nature of work that migrants do in Surat than in any other parts of the state.

Historically, migrant workers across industries and cities in Gujarat have either been daily wagers or on contract.

A daily wager has to start the day in search of work. On the other hand, a contract worker might be hired for a particular project or by a company, again for minimum wages and fixed hours of work.

But not so in Surat.

While the textile industry has been attracting migrants and skilling them in weaving, processing, and the highly skilled work of embroidery, workers are paid on the basis of the number of pieces they make.

"Such work has always set migrant workers in Surat apart from their peers in other cities like Ahmedabad, Vadodara, and Rajkot. They could easily be earning 50 per cent more than them.

"As a result, there is a certain standard of living that they have been used to, and the loss of it was hard to bear," said Arun Mehta, general secretary, the Gujarat unit of Centre of Indian Trade Unions.

Since work such as embroidery needs skilled labour, wages tend to be higher for migrants in Surat than in other cities.

Moreover, unlike their peers in other cities, who have fixed working hours, Mehta said those in Surat preferred to work longer so that they could save more.

"Working-hours are longer in Surat than in other cities," Mehta said.

Yet the irony is that while they earn more, they are hired mostly by smaller units, which ran out of capacity to sustain them during the lockdown.

On the contrary, those in other cities are hired by big companies on contract, or even small and medium enterprises that could sustain them.

"It is here that both the local administration and industry failed in preventing the violent incidents. The number of NGOs providing food and ration to the migrant workers dwindled from 300-350 initially to fewer than 100 later. They started losing patience," said Doshi.

"The issues pertain largely to daily wagers in construction and other industries. As for the textile industry, it has taken care of its workers by either providing grocery kits or running kitchens in their vicinity," said Ashish Gujarati, president of the Pandesara Weavers’ Association, one of the leading powerloom hubs in Surat.

According to Doshi, the living conditions of the workers in Surat contributed to the trouble.

"There are 8-12 members living in the same accommodation. While in pre-lockdown days, since most were out on work, social tension among them was less because of limited interaction.

"But now, no food and livelihood, along with having to live in cramped conditions, is taking a toll on their mental health," Doshi added. 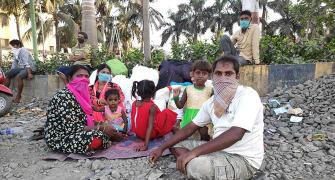 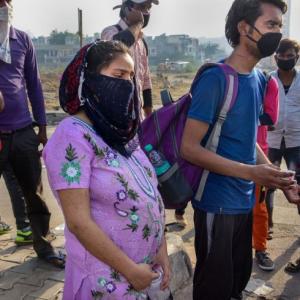 Our families need us in this tough time, say migrants