After two forgettable days, writer-director Suparn Verma was back with a bang on Monday alongside Rediff.com correspondent Abhishek Mande attending the Jaipur Literature Fest, the biggest literary meet in the Asia Pacific. Here's their Day 4 diary:

Suparn says, I don't know which was worse, my nose dripping like a leaky faucet, a throat that didn't know how to stop coughing, a fever that made me hallucinate I was arranging apples on my bed, or Abhishek Mande mysteriously 'moaning' all night.

Anyway the poor bloke had been single handedly running the show for the last day and a half, and he did a very impressive job. Today we were back as the action-packed duo picked up all the bags and headed back to the Diggi Palace after feasting on 'kande pohe' which the industrious Mande bought over from a nearby stall.

I was hoping Ruskin Bond would be around especially after hearing his session narrated ad verbatim thrice by Mande, once to me, once to his girlfriend and once to someone from the Rediff headquarters. But sadly Bond had left the building.

On reaching the venue I realised I had forgotten the Press tag, decided to pick it up later, we walked passed the front lawns where Nigerian writer Chimamanda Adichie had just started her session. Adichie was ticked off about the fact that she had an issue with her visa.

What she did not know is that getting an Indian visa from anywhere for any nationality is a problem, after all our bureaucracy is world famous!

Also Read: Day 2 at the Jaipur Lit Fest: Fever, honour and the loo!

Chimamanda charmed the audiences as she talked about her writing, her politics, and also clarified that her next book isn't about immigration, she had just said that as a response after being continuously badgered for responses.

Abhishek says, meanwhile, acting on instructions from the powers that be I decided to attend a session called 'The Idea of Rajasthan'.

Also Read: Day One at the Jaipur Literature Festival

While some of the things that were said were quite fascinating, there really was nothing new I could say I took away from the session. The speakers, I must confess, seemed quite self-involved even as the moderator looking somewhat disinterested.

After about 20 minutes of rambling, the discussion went into the ancestry of a royal family that believed they were direct descendants of Lord Vishnu.

At this point I picked up my bag and walked out. The very idea of staying over for such a discussion was pointless, especially with prospects of an interview with Chimamanda Adichie looking bright.

Encounter with the 'spineless' PR

Suparn says, Mande and I regrouped at the restaurant next to the lawns, and over a quick masala tea, made calls reconfirming the day's chats. Kamila Shamsie ended up rescheduling as she had written down the date as on Tusday. Pallavi Aiyar and Tishani Doshi confirmed we broke up again.

Richard Ford started talking about the final book in his trilogy 'The Lay of Land' about Frank Bascome, a failed novelist-turned-sportswriter who undergoes an existential crisis following the death of his son.

In the baithak area Namita Devidayal and Tishani Doshi were talking about how music and dancing respectively entered their lives and shaped their works creatively.

The most stormy session, however, was happening in The Mughal Tent with Karan Thapar and writer Aex von Tunzelmann, where she spoke about how she had a different idea of Mahatma Gandhi after she read his comments, where he said 'Hitler was not such a bad man' and that the Jews should have offered themselves to be slaughtered.

She didn't believe in his mantra of non-violence where you offered your other cheek when slapped. Thapar played to the gallery by being incredulous and surprised hoping to get reaction out off them.

Mande called. Chimamanda was lined up for a mad crazy interview session that we had begun with Junot Diaz.

I scrambled from the venue to find Mande and reached a rooftop where Chimamanda was in the midst of an interview. Thirty minutes later, she was giving her eighth interview!

Mande went to the 'Indian' PR for the tenth time who finally pointed him to the 'White' PR who was obviously running the show and not listening to anything he had lined up.

On asking her she replied that Chimamanda was already pissed and in no mood for interviews.

In any case, all the writers we spoke to directly never had an issue talking; it's usually only the PR's who have a problem.

The reason I mentioned colour in the PR scheme of things is not because I want to add my two bit to the Hartosh and Darlymple controversy about the JLF being a colonial affair, because I do not subscribe to it, with the way the show has been set up and the sessions touching upon all things Indian.

But I do take umbrage at Indians bending over backwards when dealing with a white counterpart in their job assignment. Obviously you being local would know more about publications and channels than someone who isn't educated about the media here.

My issue is with Indians whose spine suddenly seems to vanish at all things foreign. If you don't respect yourself no one will respect you either!

Abhishek says, I also couldn't help noticing that supervisory roles at many places are handled by non-Indians -- be it monitoring sessions at the Vodafone Lawns -- the largest area in the venue or monitoring the dispensing of meal plates.

Having said that I also must confess that I really don't have a problem with it per se -- the girl at the buffet is an incredibly hospitable person, always wearing a smile -- but this morning, I did wished the PR machinery to have been a little more organised that it seemed.

Having put in a request on Day One, I found myself being turned away for the Chimamanda interview. Somewhere it hurt. And that fact that I was turned away for no fault of mine, by a foreigner, made it even worse.

It brought to mind an incident that happened on the very day when I was filing the Chimamanda interview request. A foreign reporter blasted an unsuspecting PR who told her she didn't know where she could get her accreditation card, telling her rather rudely that she came from a big publication from New York.

I wonder if anyone from any other country would have tolerated this behaviour.

But then, there were other things to look forward to... like the interview with Kamila Shamsie.

'Infatuation', Kamila Shamsie and the 'photographer'

Suparn says, we set up for the chat with Tishani Doshi, although Mande was skeptical about Doshi being willing to do a crazy interview post. 'She looks pretty serious to me' he observed. I nodded my head wisely like Yoda.

An hour later it was a joy just watching his face as Tishani transformed and even danced to Sheila ki Jawani besides talking about writers and 'writerly' things in a video interview.

Next up was Mande's interview with Kamila. If you want to see Mande blush, say 'Kamila!' The infatuated lad dubbed me 'photographer' as he introduced me to her. I gallantly bowed out and kept myself busy while he interviewed her. Ah young love! His girlfriend being in Bali helps too!

Hope she keeps our date

Abhishek says, just for the record, I didn't introduce Suparn as the 'photographer' but yes the real treat of the day for me was the lovely Kamila Shamsie.

The Pakistan-born author who has now settled in London spoke with me in a somewhat hurried interview about the state of Pakistan, how Indians now look at the country with a sense of pity and an incident on the Delhi-Jaipur highway where she didn't reveal her Pakistani identity to a local for no apparent reason.

I am hoping to see her again on Tuesday to wrap up the interview and praying she also keeps our date for the chat she'd mistakenly slotted at 1 pm on Tuesday.

'Next Sex And The City will be set in India'

Suparn says, the last session was with Candace Bushnell, the sexy author of Sex and the City. New York-based model turned writer Ira Trivedi hosted the session and asked 'How does it feel to become an icon after SATC' in thirty different ways at thirty different times.

She may have asked it thirty five times, but for the first five times I WAS looking at her.

Candace was perfect with her pitch and irrespective of the questions, she carried on with what she had to say, including the 'Breaking News' of the day that the next Sex and the City will be set in India and the girls will stay in the same hotel she is staying at currently.

I decided to call it a day when Ira asked Candace her plans to have kids. She replied, "At 52 I guess the boat has already sailed," to which Ira giggled again. Luckily it was the last question of the session.

We are now headed to the music session for some fun with Transglobal Underground rocking in the grounds.

PS: Mande did say 'photographer' for me, and to make him blush, say it loud with me: KAMILA!!! 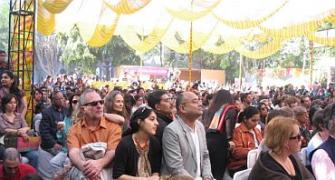 JLF Diary: Small-town stories to Af-Pak affairs
Kashmir under spotlight at literature fest
End the year on a laugh!

Day 2 at the Lit Fest: Fever, honour and the loo! 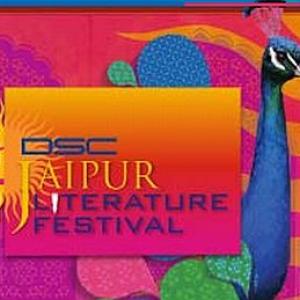