It was between 2010 and 2014 that wildlife biologists began to realise the heavy proliferation of tigers in the Bandipur National Park in Karnataka. The fiercely-territorial beasts are today locked in battle for dominance with man and his cattle. Amidst the verdant canopy of mathi, rosewood, ficus and dindal trees that grow in luxurious abundance in the Bandipur National Park, 85 kilometres south of Mysore, the intensely deep moaning sough of the tiger intermingles with the shrill trumpeting of elephants.

It is here in Bandipur that the tiger roams free; his mysterious existence broken every now and then by the sudden and spine tingling sight of his ochre stripes, aflame in the rays of the setting sun, across the emerald tinted magnificence of the jungle clad mountains to the west.

Official records, born of results obtained from camera trapping, point to the existence of some 65 tigers in these 880 sq km encompassing 13 ranges of dry deciduous jungles interspersed by moist deciduous patches towards the Moolehole range bordering Kerala.

But in reality, there could be close to 100 of them, according to tiger estimations done in 2010.

This makes Bandipur a high density tiger area with one tiger for every eight sq km.

And herein lies a tale. Of intensive conservation efforts on the one hand and the resultant growth in numbers of a certain species, in this case the tiger, on the other, and the inevitable confrontation with human beings and their cattle.

1973 -- that was when the Government of India launched Project Tiger; a serious, systematic and unrelenting effort to save one of the rarest creatures known to man. Some 47 reserves in some 17 states came under the project’s umbrella.

The numbers today point to the existence of some 1,706 tigers in the wilds of India with the upper limit pegged at 1909.

Out of this, the jungles of Karnataka are home to some 280 tigers, making it the single largest population of wild tigers anywhere in the world.

For many years, only indirect evidences like scat analysis to arrive at DNA sequencing to conclude on individual numbers and prey density studies were in vogue.

Add to this the recording of visual sightings during synchronised tiger estimations once every four years, and the forest department had a little more than a vague idea of tiger numbers.

But the installing of infra-red trap cameras at various points throughout tiger habitats in the country and also in Bandipur, where the camera threw an infra-red ray at a level of two feet from the ground, the breaking of which, by the passage of any creature through it, triggered the camera to take a shot of the animal, gave researchers almost near perfect indications of the number of tigers in a particular area.

Tiger stripes, like human finger prints, are unique to each one of them and hence could be easily examined after the photographs were collated. 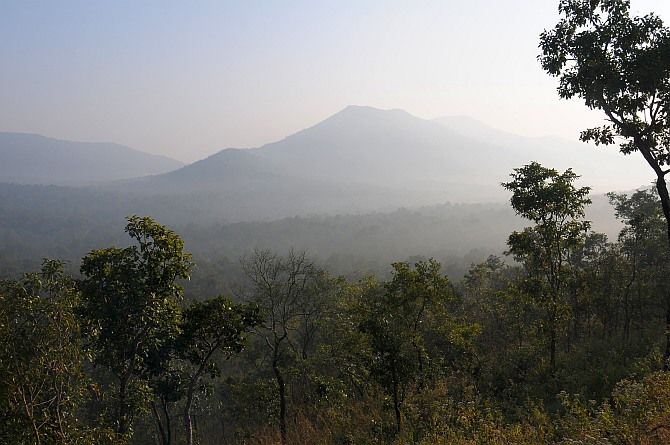 It was not until as recently as between 2010 and 2014 that wildlife biologists began to realise the heavy proliferation of tigers in the Bandipur National Park.

Camera trapping as a scientific method of enumerating the number of tigers in a given area which was put into use during this period for the first ever time, threw up startling revelations.

Why Bandipur has seen a spurt in tiger numbers is because of two reasons; the main reason being the concerted protection measures adopted by the forest department, and the other is the excellent prey base available to the tiger in these jungles where gaur, sambar, chital and wild boar roam in great abundance.

The forest department over the years has adopted a multi-layer barrier system which includes the digging of elephant-proof trenches along the periphery, the erection of solar fences and the building of service roads to gain unhindered accessibility to the border lines of the national park.

Stray cattle have been kept out to a very large extent and also human intrusions into the jungle have been minimised.

Hence the prey base of the tiger is stable.

All these conservation measures have quite paradoxically created a fresh challenge to the park managers. And that is, the incidents of tiger attack on cattle and also in some three recent cases, humans. How this came about is an issue that bears careful understanding.

Tigers are basically territorial creatures, who fiercely guard their space of eight to 10 sq km by scent and scat marking their presence and also keeping an alert eye out for intruding members of their species. 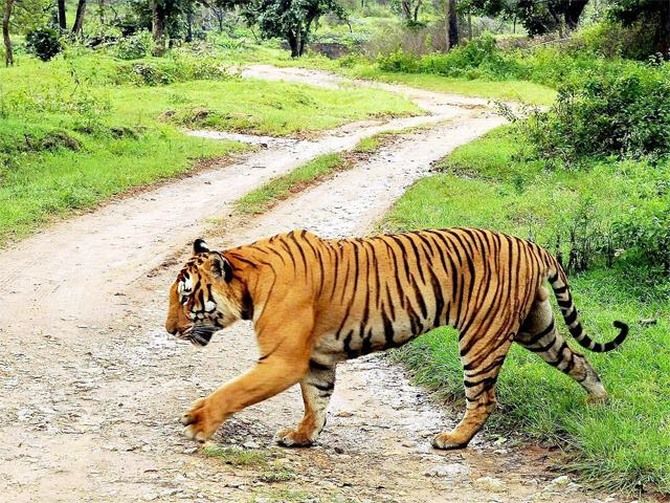 A tiger inside the Bandipur National Park. Photograph: PTI Photo

With more tigers in Bandipur than the jungles can hold, fights are bound to break out between two competing tigers vying for either the same territory or while wanting to create a new one for themselves.

The stronger and younger ones drive out the older, less powerful ones from their territories and these vanquished tigers have no choice but to try and take up residence on the fringes of the jungle.

Similarly, young adults, called stragglers, are driven out by their own mothers and are therefore forced to move to the borders.

In the tiger world, life is basically solitary with even mothers being forced to have their own children vacate the homes they were born into. After all, female tigers are prolific breeders and food and survival are the two basic ground realities of existence in the unforgiving wilds.

On the other side of the fence, within a three km radius, in the 180 villages with a human population of three lakh and a cattle population of almost two lakh that exist along the borders of the Bandipur National Park, life has largely revolved around agriculture.

An activity spawned by the digging of borewells by the Karnataka government as part of a rural development scheme in the 1990s and also the supply of free electricity to operate the water pumps since 2005.

This largesse has resulted in vast tracts of land being utilised for agriculture, with humans and their cattle making their home in huge numbers along the borders of the jungle.

In earlier times, uncontrolled grazing by stray cattle resulted in the depletion of grass cover in an average area of two km around the fringes of the national park.

A cow or a buffalo consumes around 16 kg fodder per day. Not only that, it also tramples the area where it grazes, not allowing the grass to regenerate. Thus, deer and the rest of the herbivores don’t normally exist in the fringes.

Tigers that take up residence on the fringes due to territorial issues are forced to look for alternative prey like cattle, goats, sheep, dogs and at times even humans.

Prior to 2013, there were stray incidents of tigers attacking humans inside the forests.

Almost all these cases were of cowherds being attacked when they tried desperate measures to drive away the tiger that had felled one of their cattle. A signboard at the Bandipur National Park.

“When a pet dog can get angry if you try pulling away its bowl when it's feeding, imagine the anger and irritation of a wild tiger,” says D Raj Kumar, head of the Wildlife Conservation Foundation, Mysore, who has worked for the cause of conservation in Bandipur for long.

None of these incidents were reported, he says, because the villagers did not file any complaint with the forest department authorities for fear of being prosecuted themselves for illegal entry and trespass.

Some 10 incidents of humans being injured in tiger attacks in similar circumstances were reported in 2012-13. And all these happened inside the precincts of the national park.

Tigers, emboldened by their attacks on cattle, slowly began to lose their fear of the presence of man and started to stray out of the wilds. The result was three human deaths in 2013-14 outside the national park.

The first incident occurred on 27 November, 2013, when a cattle grazer called Basavaraju was mauled to death by a tiger in the Moliyur range at a place called Nadhadi. It was around 10 am.

The very next day, Mada, a tribal, was killed at a place called Shigevadi, at a distance of around four and a half kilometres from the spot where the first attack occurred.

A few days later, on December 2, 2013, a man called Basappa met his end in Chikkabargi, 13 kilometres away.

It was found that all the three deaths were caused by the same tiger.

A cage with a calf as bait was set up in the vicinity of the area of the second attack but the tiger did not fall for the bait. It remained dangerously loose.

Panic and fear gripped the hearts of villagers in the area. And that gave way to pandemonium with a group attacking the forest department staff and setting fire to their offices in Chikkabargi out of sheer frustration and helplessness.

But the forest department staff kept up their hunt for the elusive tiger which was finally darted and trapped the day after the third death.

They found a porcupine quill embedded in its right jaw and the canines worn out due to age. The tiger, estimated to be about 10 years old, is now lodged in the Mysore zoo.

The errant tiger was caught. But not before some high drama. The local police who were given governmental orders to shoot the tiger dead fired 72 rounds into a bush where it was said the tiger was seen and all 72 rounds missed the target as the tiger had vacated the area!

Raj Kumar, while on elephant back, heard the alarm call of spotted deer and alerted the veterinarians who were on another elephant a little behind.

The tiger vanished before they could reach the spot.

Some 25 minutes later, the call of a barking deer was heard in the vicinity along with the cawing of a jungle crow.

Certainly the tiger was around somewhere. He was finally spotted sitting under a ficus tree.

A shot was fired from the dart gun but it missed. The tiger slid into the bush, not to be seen until the next day.

Finally, at 7.30 am the following day, Raj Kumar found pug marks on the banks of a dried up stream and followed them. The tiger had crossed the stream and was found resting in a bush. A langur alarm call had betrayed its location. The dart found its mark.

Raj Kumar, who’s also a representative of the National Tiger Conservation Authority, says, “The only way out is to prevent cattle and humans from entering the jungle or take up residence too close to it. That’s the only way the imprinting in the tiger’s mind that cattle and humans are easy prey can be erased. We must educate villagers on this.”

Perhaps this is easier said than done.

Humans and their cattle along the periphery of the Bandipur jungle is as much a reality as territorial fights between tigers, deep inside the bowels of the jungles.

The vanquished have nowhere to go. But somewhere some place along the fringe.

Where a cow moos and a sheep bleats its presence, perhaps for the last time in its life, as the sun is about to set in a fiery ball of orange on the western horizon, it could be the Hediyala range or someplace else.

The tiger would have felled its quarry. And if only the cowherd decides to intimidate the tiger in one last frantic wave of his wooden staff, the sad drama shall play itself out... again! 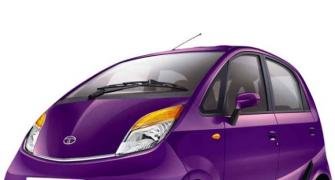 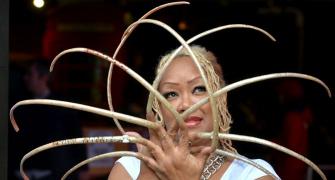 The incredibly weird world we live in! Do the Diu: India's most underrated union territory